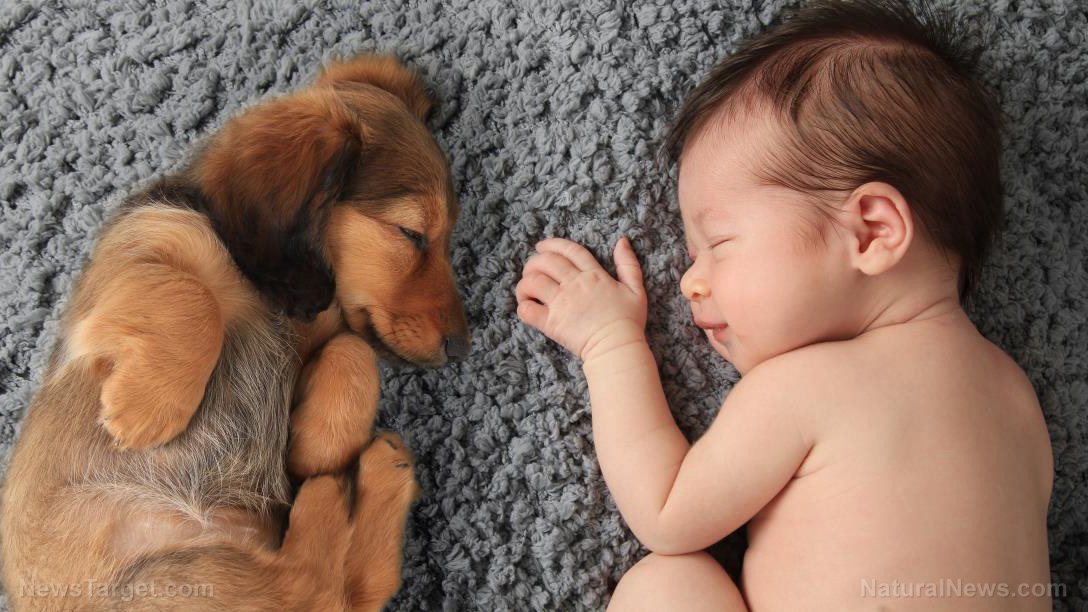 I really think that close exposure to nature obviates allergies generally.  thus a positive experience with dogs is no surprise.

What we really need is a working protocol that assists all this. The ultimate solution will be the natural community built around a sustainable agro garden.

In the meantime it is important to build dogs into our apartments somehow..

1,040Views
https://www.naturalnews.com/2017-11-02-puppies-the-latest-allergy-treatment-recent-studies-show-protective-effects-against-eczema-asthma.html#
(Natural News) There is no doubt that dogs can bring a lot of joy to people’s lives. Their companionship and loyalty can improve your mental well-being, but did you know they can also enhance your physical health? Walking a dog is great exercise, of course, but a pair of studies shows that the benefits extend far beyond the fitness aspect.

The first study looked at mother-child pairs who kept one or more dogs inside the house for at least an hour per day. The researchers discovered a significant association between a mother’s dog exposure prior to birth and a lower risk of the skin condition eczema by the baby’s second birthday. At age 10, however, this protective effect appears to decline.

The second study looked at how two different kinds of dog exposure affected children who have asthma in Baltimore. The first exposure studied was the protein or allergen affecting kids with dog allergies, and the second was that of elements that dogs might carry, such as bacteria. In this case, the researchers found that the exposure to elements dogs might carry could be protective against the symptoms of asthma. However, being exposed to the allergen could lead to more asthma symptoms in urban kids who are allergic to dogs.

According to the researchers, a child’s exposure to factors beyond the dog allergen, like bacteria and other yet-to-be-determined factors, could be responsible for this protective effect. Nevertheless, they warn that dog allergen exposure is a serious concern for kids with dog allergies.

The American College of Allergy, Asthma, and Immunology says that people with dog allergies who choose to keep a dog in the home must make a point of keeping the dog out of the bedroom. Restricting the dog to only a few rooms is ideal, although it’s important to keep in mind that this won’t limit the allergens just to that room.

They also recommend the use of high-efficiency particulate air (HEPA) cleaners. Running a HEPA cleaner around the clock in the living room or bedroom can decrease allergen levels over time, as can the regular use of central vacuums or high-efficiency vacuums.

In addition, you should bathe your dog at least once a week to keep air-borne dog allergens to a minimum, and be sure to wash your hands using soap and water after petting your dog.

Earlier this year, a Canadian study showed that exposing babies to puppies could help them accumulate gut bacteria associated with a reduced risk of allergies as well as obesity.

The researchers analyzed feces samples taken from 746 babies. Those who had dogs or cats in their home while they were in the womb and in early infancy had higher levels of the gut microbes known as Oscillospira and Ruminococcus, both of which have been associated with reduced odds of obesity and allergies respectively.

The researchers theorize that pet exposure during pregnancy might influence the infant’s gut microbe composition by affecting the mother’s skin or vaginal microbes, which are then passed on to the baby during birth – even if the baby is born by C-section.

As an infant, pets could transfer the beneficial microbes when touching the babies, or the infants might pick them up through contact with household surfaces or dust. While it’s clear that some bacteria are simply more common in the gut flora of kids who are born in homes that have pets, further studies are needed to determine how these bacteria can affect their health. Nevertheless, gut flora diversity is already known to boost immunity.

Previous studies have shown that homes with dogs have lower stress levels.

Dogs are America’s most popular household pets, with more than 54.4 million households in the country having at least one dog in the family. While parents need to keep a close eye on children at all times when they are around dogs, there are lots of benefits for kids who have a canine companion in the home.
Posted by arclein at 12:00 AM