Up Tempo with Trump Counter Revolution 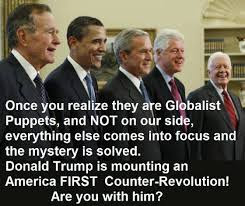 This will be an unusual report today and it is timely.  I am not including any of the sources out there as they are just snippets of plausible truth and without a central narrative are simply too premature.

Conjecture1:   Trump empowered General Flynn who formerly led the Marines to prepare for a move on the CIA shortly after he entered the white house.  At the same time he also ordered Jeff Sessions to be ready to move on elements within the FBI.  These were obvious and necessary actions while he ran cover for this.

Conjecture 2:    It was also determined that they had to take down the clearly criminal aspect of CIA operations.  This particularly meant the drug industry activities which had been carried on for decades and were no secret to anyone at all.

I did expect a take down to be attempted but lacked insight as to focus and likely efficiency. What we are picking up looks to be both surgical and profoundly strategic and does not initially disturb operations significantly.

If we are reading this right, they moved on the CIA this past Saturday with an actual Marine battle group in support to discourage anything but abject compliance. Lots of obvious drama but it was surely led by military intelligence who took a large trove of electronic data and computers and perhaps documents as well. This allowed rapid processing and the immediate use of tactical information.  Almost within hours we heard of CIA drug labs in Afghanistan been hit which implies forces on standby waiting for the data.

Then yesterday it is told that the FBI is not making outgoing calls which strongly suggests that we have a DOJ operation underway as well.  This is also likely securing key data and evidentury computers.

We are not hearing of specific individuals been arrested but that could well be just too soon and i suspect that the NSA data dump has been processed and has produced the whole vast network of folks who need to be questioned closely.  Thus it could be far better to complete interrogation or if not possible to simply let them know they will be dealt with in due time.  Particularly if you already have all their data.

It is noted by observers that both Hillary Clinton and John McCain are sporting apparent foot casts which can be used to cover up a monitoring device.

For the impatient,  this is slow motion but when thousands of individuals must be carefully vetted, it must take time.

However, the reported bombing in Afghanistan tells us this is been tightly operated by loyal military forces who are not about to let anything slip.  This also puts the CIA on notice that anymore tap dancing on the JFK files will not be tolerated.
..