I learned once that crushed leaves can be used to knock out fish.  That informs us that producing a gel from the leaves may well be useful as a skin treatment as well.  However drying it for tea may well be the most practical protocol.

The main point is that it is an active plant and it is truly everywhere.

It has no reputation for any other benefit though.  Yet domestication could surprise us as it is a handy seed producer that only needs to be upgraded..
.
Mullein

Mullein is mildly relaxing, helps to promote calm feelings, and fights against anxiety. Typically mullein is added to smoking blends to reduce harshness. It burns slowly and steadily, with thick plumes of white smoke that’s soothing to the throat. Mullein can also be taken as a tea that promotes healthy digestion and reduces stomach discomfort.

Effect when smoked: none to mild relaxing effect

How is it?: Not harsh on the throat at all and it does not smell a lot when smoked. Fast burning

Pro: Great for the body, cheap, great base

Best with: Damiana and pretty much everything

Benefits: Clean the lungs, activate lymph circulation in the chest and the neck, diuretic, encourage expectoration, sooth the throat etc.

Recommended as a base for any herbal blends

Mullein (Verbascum thapsus) is a plant that can grow up to more than 2 meters and it is easy to find around since it grows pretty much everywhere. It can be found in all 50 states of America. Its leafs are fluffy and hairy (which can irritate the throat when drank).

Mullein (verbascum thapsus) is a genus of plants containing over two hundred different species. The plants are part of the figwort family and are tall plants with small velvety flowers in an array of colors from white, orange, and red to blue and purple. Some varieties of the Mullein include great mullein, common mullein, white mullein, and golden rod.

Mullein has a number of homeopathic uses. It is known for having astringent, sedative, and relaxing properties. It is often used to treat respiratory issues such as asthma and cough or colds. The herb is often gathered wild, rather than farmed. The most commonly used parts of the plant are the leaves and flowers. 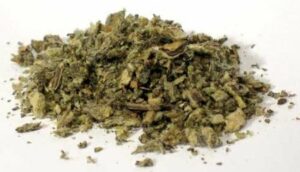 Mullein has long been used as an herbal remedy for respiratory problems, including asthma. It is often a common herbal remedy for ear infections, especially in people sensitive to normal antibiotic treatments. It is also used to relieve sore throat, cough, and pleurisy. The flowers are the most commonly used part of the plant.

They are used in a variety of ways. Dried and powdered Mullein is often added to smoking blends for its beneficial effects on the respiratory system. However, smoking is one of the least effective means of using this plant’s properties. The flowers and leaves can be dried and made into a tea and there are tinctures, syrups and drops available for easy ingestion.

Asthma: Mullein is well known for its positive effect on the respiratory system and is often used as a remedy for asthma. When taken as a tincture or tea on a regular basis, it is believed to reduce the frequency and severity of asthma related problems.

Cough: Mullein’s benefits to the respiratory system make it a great choice for use as a cough remedy. Many herbal cough syrups contain Mullein.

Sore Throat: One of the reasons Mullein is so popular is that it soothes the pain associated with irritation from coughs and infections. It does double duty when added to cough syrups or drank as a tea for respiratory ailments.

Ear Infections: Mullein is a common herbal remedy for ear infections. Known for its astringent properties and soothing effect, Mullein is very popular for use as ear drops.

As a Sedative or Legal High: Mullein leaves have a mild sedative and narcotic properties. When smoked or added to teas, they can produce a mild, legal high.
Methods of Use

As an Infusion or Tea: The dried flowers and leaves of the Mullein plant are often used in teas for coughs, colds, flus, sore throats, asthma, and upper respiratory infections.

As a Smoking Blend: While smoking isn’t the best way to impart Mullein’s curative properties on the respiratory system, Mullein leaves are believed to have sedative and narcotic properties and can provide a mild, legal high when smoked.
Effects

While some people have a mild sensitivity or skin allergy to Mullein, it is considered a safer alternative to many antibiotic treatments. It has no known side effects.

Mullein root is legal to buy, sell, own, and use. It is widely available in a variety of forms.
Where to buy mullein
Posted by arclein at 12:00 AM