Did Mycenaean Greeks serve in the Egyptian military of Ramesses?

Of course they did.  there was constant shipping between the Greek islands and coast and a steady need for hands.  Thus a steady flow of adventurous youth who would accept service with the Egyptians.

This was also before the Bronze Age collapse and thousands of ships plied the waters.

After all it is in this era that the Sea Peoples actually landed in North Africa and actually moved to conquer Egypt.  That alone proves out centuries of infrastructure building..

Did Mycenaean Greeks serve in the Egyptian military of Ramesses?

2 June, 2014 - 22:39 pkoutoupis
http://www.ancient-origins.net/myths-legends-opinion-guest-authors/did-mycenaean-greeks-serve-egyptian-military-ramesses-001714?nopaging=1
In the year 2006, news outlets all across the globe began to report of an extraordinary archaeological find from a Mycenaean palace located on the island of Salamis, the largest island within the Saronic Gulf in the Attica region. This find was of a bronze scale belonging to a larger quilted piece of armor typically fitted over the torso. This scale was stamped with the royal cartouche of Ramesses II (i.e. Ramesses the Great), who reigned over ancient Egypt ca. 1279 - 1213 BCE. This find alone, rewrote part of what we knew of Greek history during the Bronze Age and their role outside of the Aegean.

Bronze plate from scale corselet, of Anatolian type, with the cartouche of Ramesses II. Credit: University Excavation of Salamis Archives.

What made this find truly unique was the fact that this was not of the typical armor type worn by the Mycenaeans during the Late Bronze Age. Attested by Mycenaean Greek art and archaeological finds of Mycenaean weaponry and armor, it is well understood that early in their civilization, the Mycenaean warriors wore a full body armor referred to as the panoply. It consisted of several elements, which included body cuirass, shoulder guards, breast plates, and lower protection plates. The panoply also included both greaves and lower arm-guards. The best known example has been discovered at the village of Dendra in the Argolid, Greece dating to approximately the 15th century BCE. The typical helmet that accompanied this outfit was made of boar’s tusk which recalls Homer’s Iliad:

“And Meriones gave to Odysseus a bow and a quiver and a sword, and about his head he set a helm wrought of hide, and with many a tight-stretched thong was it made stiff within, while without the white teeth of a boar of gleaming tusks were set thick on this side and that, well and cunningly, and within was fixed a lining of felt.” 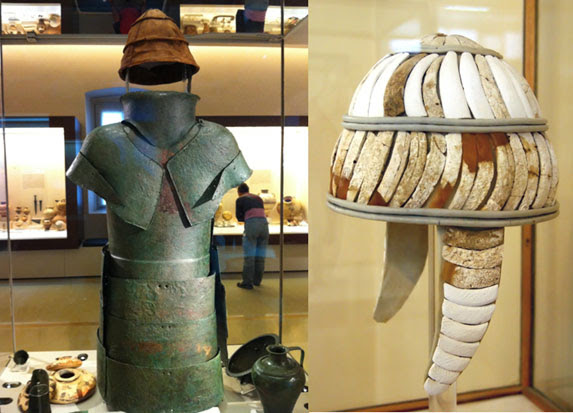 By 1200 BCE the armor style had gone through some changes. Depicted (and inscribed) on the mortuary temple of Ramesses III (reigned ca. 1186 - 1155 BCE) at Medinet Habu and the Pharaoh’s battles against the Sea Peoples (a coalition of predominantly Aegean warriors), instead of wearing the heavier bronze armor, the warriors which are generally believed to have consisted of Mycenaeans, were wearing a waist length ribbed leather corselet with a fringed leather apron which reached down to the middle of the thighs, possibly chosen in favor of mobility, cost, and ease / speed of manufacture (please refer to the featured image of the Warrior Vase and the image below). 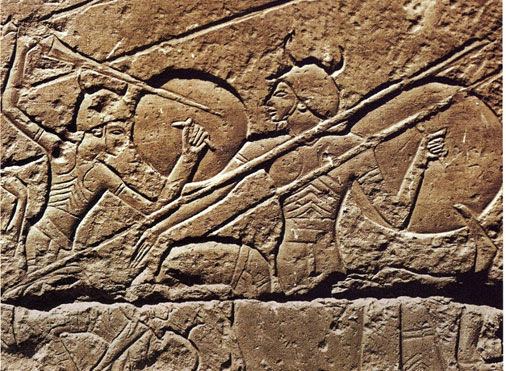 3
A stone carving on the mortuary temple of Ramesses III. Image source.

It was not uncommon for the nations of the Late Bronze Age to employ mercenaries as part of their royal guard and/or infantry. Such an example can be seen with Ramesses II and the Pharaoh’s inscriptions at Abu Simbel. In his second year of reign, Ramesses boasts of his defeating a group of raiders invading the Egyptian coast at the Nile delta. This group was identified as the Sherden (sometimes referred to as the Shardana). While their exact origins are unknown, they are believed to have come from the general Aegean region. After the defeat of the Sherden, the Pharaoh takes them as captives and offers them an opportunity to be part of his personal bodyguards. The Sherden are also noted as serving the Pharaoh in his most memorable battle against the Hittites at Qadesh in 1274 BCE (Healy, 38).

Could the Mycenaeans also have served the Pharaoh in some form? If not as part of the infantry, could they have served in the Pharaoh’s navy? The Mycenaeans were well renowned for their seafaring skills and their traded goods across the entire Eastern Mediterranean. With their seafaring expertise, they could have limited pirating or an invading force from the sea. Based on the discovery of Egyptian armor in Greece, we are looking at two possibilities: (1) The Mycenaeans did serve the Pharaoh Ramesses II as part of his military or (2) the bronze armor scale found its way to Greek shores via trade. It was also not that uncommon for bronze manufactured weaponry to be traded throughout the Eastern Mediterranean.
Featured image: Painting depicted on Mycenaean Warrior Vase, 12th century BC. Source: Wikipedia
By Petros Koutoupis
Posted by arclein at 12:00 AM