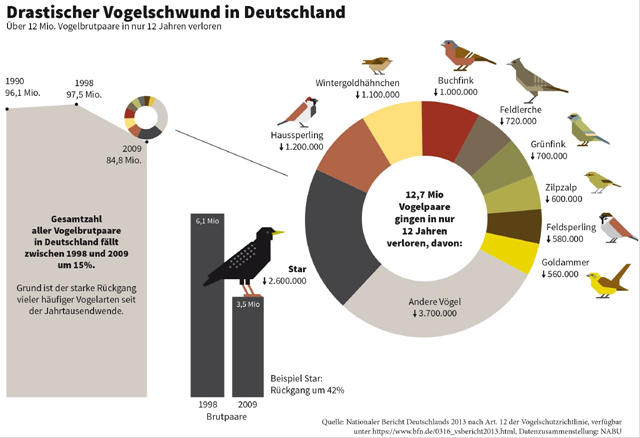 Do we really have to have a 70% collapse in  food production brought about by excessive use of insecticides before the whole industry comes to its senses?  We are certainly trying hard enough.

Perhaps it is time to charge back all costs until we prove it is true.

We do know better.  Reporters dancing around the obvious is becoming tiresome. .

(Mongabay) – A new study in PLOS ONE reveals a 76 percent reduction in Germany’s flying insect biomass over the past 27 years while another reports the country’s bird abundance has declined 15 percent in just over a decade.

While the causes behind the insect decline haven’t yet been conclusively studied, the PLOS ONE study suggests agricultural intensification like increased pesticide use may be contributing to the decline.

Neonicotinoid pesticides have been blamed for bee declines, and studies also link them to declines in aquatic insect communities. Many flying insects have aquatic life stages.
More research is underway to better understand the causes and ramifications of such a big decline in flying insect biomass.

Germany’s flying insect biomass has dropped 76 percent in the past 27 years, according to a study published last week in PLOS ONE. The findings have stunned biologists around the world and are prompting concern about potentially disastrous ecological consequences as another study finds the country lost 15 percent of its birds in just over a decade. […]


The drop-off in Germany’s insect abundance isn’t just concerning to entomologists. Flying insects are important for other wildlife and ecological processes: they are a critical food source for many bird species, and countless plants depend on them for pollination. These effects also translate to benefits for humanity, with the total economic value of pollination estimated to be around $177 billion in 2009. As bees decline, farmers report it’s getting harder for them to grow crops that depend on bees for pollination.


Scientists think bird populations may already be declining in response to reductions in insects. A recent study of government data by German environmental organization Nature And Biodiversity Conservation Union (NABU) estimates that more than 25 million birds disappeared from Germany over the past 12 years. That’s about 15 percent of the country’s total bird population.


The authors of the NABU study say that a direct relationship between Germany’s insect and bird declines is very likely. The study also found the bird drop-off correlated to shifts in agricultural land use from pasture and fallow land to more intensively managed corn and rapeseed crops.


Bird disappearances aren’t limited to Germany. On the other side of the Atlantic in North America, barn swallows have declined around 95 percent in the past 40 years. Other swallow species also seem to be dropping off. Since swallows are heavily dependent on flying insects (they catch their food on the wing), scientists think insect decline may be to blame here, too. [more]