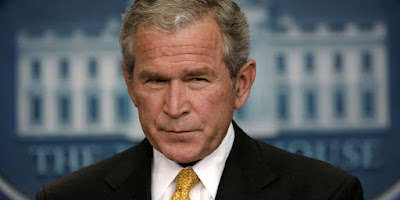 Yes he did open his mouth.  Who knows what he thought to accomplish when he had been utterly silent for eight years under Obama.    That is my point. That silence not broken by even an op ed does disqualify you as a senior statesman.

Now citizen Bush has simply stood up to protect the neo conservative agenda so utterly discredited. That it is now becoming evident that we were stage managed into a massive Gulf War and the particularly disastrous fraud of the so called reconstruction should be a source of introspection and shame.

Unbelievably his successor did a far worse job.  Forgiving any of these fools is difficult.  I have yet to discern a strategic bone in any of them.

Lack of strategic vision now leads to sh'ite suppression of the Kurds and a potential civil war that expands into Iran and engulfs northern Iraq along with the current activity in turkey.  All easily still born by long ago rotating USA forces into Kurdistan and connecting with Russia.  Oh well.


The former President of the United States, George W. Bush, made quite a splash recently when he took swipes at President Donald J. Trump.


First, the consternation of Deplorables aside, for purposes of clarity, it is actually a very good thing that Bush delivered his speech. To as great an extent as anyone, the former President signifies the neoconservatism against which traditional conservative and Republican voters rebelled when they catapulted Trump to victory.


In other words, the symbolism involved in juxtaposing Bush with Trump couldn’t be richer inasmuch it symbolizes nothing more or less than the dramatic contrast between two ideal types: the GOP of yesteryear, a party run (and run into the ground) by neoconservatives, and the “populist,” more traditionally conservative GOP of the present and future.


To be clear, the contrast in question here is largely symbolic: Substantively speaking, Trump’s GOP has as yet shown few signs of having repented of its past ways (or of even having a pulse). The neocons, on the other hand, are still very much alive. Still, there can be no question that they have been humiliated and that Trump is looking to steer the party in a new direction.


Second, that Bush, who insisted upon being neither seen nor heard during the entirety of Barack Obama’s eight year tenure in the White House, should only now break his silence by criticizing Trump is a painful reminder of who he has always been.


It isn’t just that Bush and Obama, like Democrats and Republicans generally, belong to one and the same Regime, a Government-Academic-Media-Entertainment (GAME) Complex that its agents want to protect from Trump and his army of Deplorables. Obama, you see, had been widely hailed by the journalistic and political classes as “the first black POTUS.” To criticize Obama, then, would have made Bush vulnerable to the charge of “racism,” a charge that the Bushes of our political universe fear more than anything.


After all, in spite of owning a presidency replete with truly epic disasters, the only regret that Bush ever expressed was that Kanye West, rapper and husband to Kim Kardashian, charged the 43rd President with being indifferent toward black people.


As for those thousands of American soldiers and nearly 500,000 or so Iraqis whose deaths Bush made possible by way of a war that he launched on false pretenses, they evidently do not register as high in importance with Bush as does Kanye West’s estimation of him.


Third, regarding Bush’s signature war, it must never be forgotten that the invasion of Iraq was justified on the basis of a fiction. Nor is it honest to say, as the war’s apologists have repeatedly said, that everyone thought that Saddam Hussein had Weapons of Mass Destruction (WMDs):


(b)Even if there was unanimous agreement that Hussein had WMDs, that he posed an imminent threat against America, and/or that only a preemptive strike against Iraq would prevent him from eventually attacking us were certainly not propositions on which there was anything like a consensus. In fact, the evidence didn’t support these assertions at all.


So, assuming for argument’s sake that the entire international intelligence community really did agree that Hussein had WMDs, it did not have evidence that the dictator planned on using them to launch an offensive attack against America. That the Bush administration manipulated what (flawed) intelligence existed, rendering it more ominous than it was, is now clear.


Fourth, this last is a bitter pill to swallow for his legions of apologists in Big Conservative media in all of its forms, for they spent the better part of Bush’s presidency tirelessly defending him and his war. In exchange, several of Big Con’s celebrities received direct access to the President and his staff.


But in the meantime, thousands of American soldiers and tens and tens of thousands of Iraqis died. Thousands of more Americans were maimed, both physically and psychologically, and their families made to endure pain the likes of which few of us are accustomed to experiencing.


While Bush and his propagandists in Big Conservatism were defending the war, Christian communities that had existed for nearly 2,000 years in Iraq were destroyed, their inhabitants made homeless, exposed in this predominately Islamic land to the homicidal hostility of the majority. They were not alone as Yazidis too became subjected to horrendous persecution.


Fifth, in the face of the enormous death, pain, and misery that he made possible, Bush had the audacity to make jokes at a Correspondents’ Association Dinner in 2005 over the fact that, his earlier assurances aside, no WMDs had been found. And yet Trump is supposed to be the crude one? In 2013, the now late Tomas Young, an Iraqi veteran who was dying at the time, made the point aptly:


Finally, while Bush (along with those who continue to support him) implied in his speech that Trump is “bigoted,” “racist,” and a “white supremacist,” even the blindest of ideologues can see that it is Bush, not Trump, who is responsible for having brought about the destruction, maiming, and displacement of hundreds of thousands of mostly non-white peoples, people of color not just in Iraq, but in Afghanistan as well.


Had an alien from another planet descended upon Earth and observed Bush’s foreign policy in action, would he not determine that this powerful white man, the President of a predominately white country, the most powerful and affluent country on the planet, was a homicidal “white supremacist” after seeing him launch a non-defensive war on a small, poor, Third World country populated by non-whites?


G.W. Bush hasn’t an ounce of moral capital to criticize anyone, least of all Donald Trump, a President who, thus far, hasn’t acted remotely as reckless or immoral as he behaved for eight long years. The world, particularly the Middle East, is still suffering from his legacy.
Posted by arclein at 12:00 AM