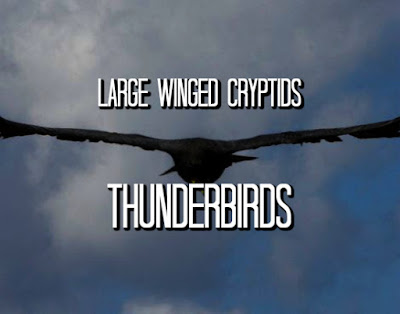 Again we are getting a little more on thunderbirds.  The one estblished a 25 foot wing span and the full ninety degree wing stroke as well.  This compares well with an earlier sighting done against a cloud with a small aircraft near it.

The first batch appear to have been rousted out of their homw by the hurricane.  I also note we seem to be getting association with swampland.  This makes local sighting difficult if their lifeway is swamp oriented.

By the same note the pterosaur is surely a wetland animal as well as they are also aquatic and fish underwater..  All this helps explain why sigtings are so rare.
.
Large Winged Cryptids / Thunderbirds

Julian in Texas called in to tell of his Thunderbird sightings:

“I've had five sightings of the Thunderbird. This happened after the Hurricanes came through in 2005 in October. They're huge. First one I saw, I was out in the boat. I thought it was a plane coming over. Next day I was sitting out at the swing with my mom and my brother and I was telling the story and one flew over the trees and landed in a tree by the lake about 20... less than 20 yards away. I've seen the eyeballs and this bird, I can tell you, it's got a hook beak and it's between 12 and 15 foot and they're amazing. The one I saw, there was was a juvenile with it. A smaller one. It's feathered, a beautiful hawkish looking bird. My brother stood up and said what the F is that? It was just sitting there with the juvenile. The juvenile landed and the big bird came over the trees. There's about a section about 30 yards wide between the trees and the lake. I don't know. I mean it's the most unusual... I've been wanting to tell this story for so long. And then when it flew away, it's the most amazing thing I've never heard anyone say this before but the wings almost touched tip to tip and it made a circle is it flew away. I could see it fly across the lake. It didn't make a sound. I couldn't hear it. I could see it's eyeballs though. That's what was amazing. The thing saw us and just took off, you know. I was within 20 yards of it.”

Sir - this is my written statement that you requested after our telephone conversation.

On Monday Dec 15th at 6:45 PM (dark) I is was traveling on the Airport Rd near the New Kent Co. Airport. This section of road went by the New Kent trash collection center. The road is bordered by woods on both sides.

As I approached this location, I noticed something large and dark on the road very near the trash collection lot. I hit my brakes and came within 50 ft of what appeared to be a huge bird. Like I told you on the telephone, when I say huge, I mean something of unbelievable size. First of all, it had the overall shape of an eagle. It definitely had talons which were lighter in color. It also had beak which seemed too large and long for it's face. The overall color was dark, I'd say black. The height was at least 8 ft, probably more as it bobbed up and down. It may have been eating something when I approached it.

It's head moved toward the direction of my car and made a grunting sound. It turned away from me and the long tail with feathers swung around in my direction. The wings, which extended across the road, unfurled as it lifted off the surface. The wings were massive, but like I said reached past the width of the road. I told you 25 ft on the telephone, I still believe that is a correct estimate.

I searched 'monster birds' and found your telephone number and email. I looked at different images of eagles and hawks online but there was nothing that closely resembled this bird. Thanks for talking to me. JD

NOTE: I received the phone call from JD early this afternoon, then I requested he write a report and forward. After I finished talking to JD I went to Google in order to find the location. I then realized that the location was within a few miles of a large bird sighting in May 2013 - Huge Bird Sighting - New Kent Co., Virginia. The descriptions were different in most respects...but both were of birds of enormous size. The entire area seems to have a lot of wetlands & swamps.

During our phone conversation, JD mentioned that the bird had something in it's talons. He said he got a brief look as it started to fly away, but mentioned that 'legs were dangling from one side.' He didn't say human and didn't want to include it in the written report. I'm only mentioning it since it was in his original statement.

I brought up the subject of Pterosaurs to JD, but he said it definitely had feathers. Could this have been a Thunderbird? I was somewhat taken aback by the size description...8+ ft high and wingspan of 25 ft. This is bigger than any other Thunderbird-type sighting I've ever received. Lon

I received this report of an incident that occurred on Monday, October 31, 2010:

I looked to the southwest in the sky, about 1/2 to 3/4 of a mile away, I notice something in the sky, I thought it was a hand glider. It was shaped strange like a "V" flying backwards, and it had like a head and a neck sticking out.

Then I saw it turning really tight and was thinking how cool it looked. Then it started flapping its wings and it freaked me out.


I was trying to slow down but there were cars behind me and I would have to go down the road and turn around and really nowhere to pull over to see it again.

The shape while it was gliding was very strange; it seemed the wings tapered all the way down to nothing, not to a tail.

I'm 46 yrs old - lived and hunted in Pennsylvania my whole life and have seen turkey vultures, turkeys, great horned owls, cranes, and eagles. This seemed much bigger than all. If you can find out if there were any other reports similar, can you please email me, Thanks, D.”

“I used to live ten miles North of Lake Geneva in the East Troy WI area, and I investigated several reports of UFOs sailing over the rolling farmland and hovering low enough overhead to "hit with a rock", but never ran into any Big Black Bird (BBB) reports there.

However, my brother has had several strange encounters with weird things near his home in Providence, R.I., and one event that affected him the most was a sighting of two giant birds during a dawn fishing trip in Providence's famed Roger Williams Park.

As he was approaching one of the Park's larger interconnected lakes, walking across a tree-studded lawn surrounding a marble music temple, a pair of huge black "crows", with bodies as large as VW bugs, came swooping out of the early morning lake mist, flapping their enormous wings slowly as they swept between the treetops, curving past him thru the swirling fog, then twisting between the large shoreline oaks' intertwining branches and vanishing out over the lake!

They made no sound except the soft whoosh of air over their beating wings; their feathers were jet black, as were what he could see of their eyes; there was no odor. He froze in place as the apparitions flew past, then he rushed down thru the trees to the water's edge and scanned the lake's surface, but the creatures were nowhere to be seen, and never seen there again.

There are many other reports of paranormal activities in and around that Park over the years, including several experienced by my brother. Thanks - W.”
Posted by arclein at 12:00 AM