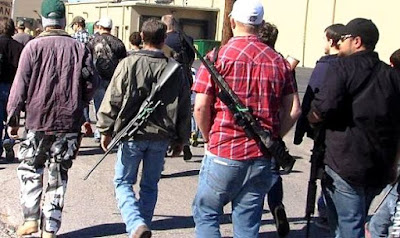 This should be obvious but it is not.  Gun safety and use is all about training. Gun owners usually have some training.  It is my opinion that they should have a high level of mandatory gun training before been allowed to own a weapon.

As in basic training equivalent.  A great use for cadet training.  Could even throw in some fitness and drill.

The point of drill is to train up your muscle memory so that safety becomes the default muscle mode.  None of this happens because your brain thinks that safety is a good idea.

Over a million people in Texas are licensed to carry a handgun. Texas, which is where a crazed gunman, Devin Patrick Kelley, shot 26 people to death at a church on November 5, also reports on the number of crimes published by legal owners of handguns. In 2016, two were convicted in Texas of murder and another two were convicted of manslaughter. If Texas were an independent Republic, as indeed is the aspiration of many Texans, homicide convictions among legal gun owners would be about 0.4 per 100,000 residents.

In the case of Kelley, he had a firearms license that he had obtained fraudlently. On his application for a firearm, he stated falsely that he had no felony convictions. In reality, he was convicted of serious domestic abuse, as well as battery of his step-child. For his crimes, he was kept in prison for a year and given a dishonorable discharge by the Air Force. In addition, he escaped a mental health facility. On November 5, Stephen Willeford -- a former NRA instructor -- confronted Kelley after the shooting and shot him twice with a rifle. Willeford was licensed to possess his rifle.

According to an official report for March 2016, Britain’s Office of National Statistics noted:

“There were 571 homicides (murder, manslaughter and infanticide) in the year ending March 2016 in England and Wales. This represents an increase of 57 offences (11%) from the 514 recorded in the previous year.

“The number of homicides has shown a general downward trend over recent years and the 571 recorded was still one of the lowest levels since the late 1980s, despite having increased from the previous year.

"It is my opinion that they should have a high level of mandatory gun training before been allowed to own a weapon."

You do understand the difference between a right and a privilege, I hope?

In the 1980s, in Rhode Island, permits to own handguns required attendance at a state-run gun course. But they only scheduled it once a year, and limited the number of seats. If you didn't have "connections," you didn't get in.

This is morally equivalent to your right to vote being preconditioned on passing a literacy test.

When you give a government any power that CAN be abused, it WILL be abused.