Factory-Like Schools Are the Child Labor Crisis of Today 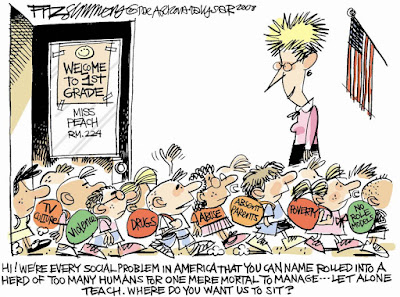 I do think that my one room school did it better.  My high school did well enough but not so good as to provide for a useful alternative to social smoking.  Or to create bully free environments even with access to coercion.

The first problem is time control which has obviously degenerated into what is convenient for the laziest teacher.

The school has the children for six to seven hours.  That whole protocol needs to be better understood and creatively managed.  We have already had a discussion of reversing the homework presentation cycle.  How about teachers been attached to their classes during recess to direct social interaction and provide authority as requested?  It is still a serious change of pace.

This way it becomes plausible that homework becomes contemplative meditation in which material is carefully read.  And with prepared minds, it may become possible to have class sessions in which student present additional readings  to their fellow students thus encouraging the rest to expand their preparation.

A history class about the thanksgiving myth will be a lot more interesting if all came to class having read same and then listen to readings of alternative descriptions.  In fact it allows a proactive learning environment.

After school, children do need chores to attend to, either family driven or better yet, community driven.  This burns off any remaining physical energy before going home for supper.  Those forests do need active grooming by ad hoc grooming teams who set out to collect a bin of material. .


Factory-Like Schools Are the Child Labor Crisis of Today

Compulsory schooling was meant to save children from the dangerous conditions of the factory, but these days, "traditional" schooling is easily just as dangerous to children's well-being.

Most American children and teenagers wake early, maybe gulp down a quick breakfast, and get transported quickly to the building where they will spend the majority of their day being told what to do, what to think, how to act. An increasing number of these young people will spend their entire day in this building, making a seamless transition from the school day to afterschool programming, emerging into the darkness of dinnertime. For others, there are structured afterschool activities, followed by hours of tedious homework. Maybe, if they’re lucky, they’ll get to play a video game before bed—a rare moment when they are in control.

There is mounting evidence that increasingly restrictive schooling, quickly consuming the majority of childhood, is damaging children. Rates of childhood anxiety, depression, behavioral problems, and other mental illness are surging. Teenage suicide rates have doubled for girls since 2007, and have increased 30 percent for teenage boys. Eleven percent of children are now diagnosed with Attention Deficit Hyperactivity Disorder (ADHD), and three-quarters of them are placed on potent psychotropic medications for what Boston College psychology professor Dr. Peter Gray describes as a “failure to adapt to the conditions of standard schooling.”

Dr. Gray goes on to explain:

It is not natural for children (or anyone else, for that matter) to spend so much time sitting, so much time ignoring their own real questions and interests, so much time doing precisely what they are told to do. We humans are highly adaptable, but we are not infinitely adaptable. It is possible to push an environment so far out of the bounds of normality that many of our members just can't abide by it, and that is what we have done with schools.

In the early twentieth century, concern about children’s welfare in oppressive factories was a primary catalyst for enacting child labor laws and simultaneously tightening compulsory schooling laws. Yet, for many of today’s children, the time they spend in forced schooling environments is both cruel and hazardous to their health. Gone are the oppressive factories, but in their place are oppressive schools. Where is the outrage?

In a New York Times Op-Ed article this week, author Malcolm Harris posits that young people are placed into these high-pressure, increasingly competitive schooling environments by corporate interests aiming to push job training to younger ages without having to pay for it. He writes:

There are some winners, but the real champions are the corporate owners: They get their pick from all the qualified applicants, and the oversupply of human capital keeps labor costs down. Competition between workers means lower wages for them and higher profits for their bosses: The more teenagers who learn to code, the cheaper one is.

[ this is total leftest rubbish - arclein ]

Unions aren’t just good for wage workers. Students can use collective bargaining, too. The idea of organizing student labor when even auto factory workers are having trouble holding onto their unions may sound outlandish, but young people have been at the forefront of conflicts over police brutality, immigrant rights and sexual violence. In terms of politics, they are as tightly clustered as just about any demographic in America. They are an important social force in this country, one we need right now.

While Harris and I agree that the conditions of forced schooling are untenable and rapidly worsening, we disagree on the solution. To suggest that students unionize to demand better compulsory schooling conditions is similar to suggesting that prisoners unionize to demand better prisons: It’s a fine idea but it’s completely futile. Children are mandated under a legal threat of force to attend compulsory schools.

The first step to addressing the oppressiveness of forced schooling and its harmful effects on children is to fight the compulsion. Rather than trying to improve the conditions of an inherently unjust, state-controlled system, the system itself must be overturned. After all, humans cannot be truly free when they are methodically, and legally, stripped of their freedom under the pretense that it’s good for all.
Posted by arclein at 12:00 AM