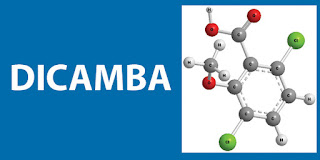 Mother Nature is slowly driving Monsanto from the field.  A volatile herbicide is of no use if it floats out over the fields of others.

We now maintain that the future of agriculture will be intensive sustainable organic agriculture in combination with agrobots able to even collect individual insects and weed sprouts as an ongoing maintenance practice.

It will take one generation.

http://www.zerohedge.com/news/2017-11-01/meet-monsantos-other-herbicide-problem
Earlier this year we wrote about a series of court documents that were unsealed and seemingly revealed a startling effort on the part of both Monsanto and the Environmental Protection Agency (EPA) to work in concert to kill and/or discredit independent, albeit inconvenient, cancer research conducted by the World Health Organization's International Agency for Research on Cancer (IARC) related to their key herbicidal product, RoundUp.  The efforts to kill the research came even as Monsanto's own lead toxicologist, Donna Farmer, admitted that she "cannot say that Roundup does not cause cancer" because "[w]e [Monsanto] have not done the carcinogenicity studies with Roundup" (see: Monsanto Colluded With EPA, Was Unable To Prove Roundup Does Not Cause Cancer, Unsealed Court Docs Reveal).

But, as Reuters points out today, RoundUp isn't the only Monsanto herbicide causing outrage in the ag community these days as state regulators all across the country say they're being flooded with reports from farmers that Dicamba, Monsanto's other herbicide, is increasingly becoming airborne and killing crops far away from the fields where they were actually applied.

Monsanto is banking on weed killers using a chemical known as dicamba - and seeds engineered to resist it - to dominate soybean production in the United States, the world’s second-largest exporter.

The United States has faced a weed-killer crisis this year caused by the new formulations of dicamba-based herbicides, which farmers and weed experts say have harmed crops because they evaporate and drift away from where they are applied.

Regulators in several major soybean-growing states, including Arkansas, Missouri and Illinois, each say they received roughly four years’ worth of complaints about possible pesticide damage to crops this year due to dicamba use.

Now agriculture officials face long backlogs of cases to investigate, which are driving up costs for lab tests and overtime. Several states had to reassign employees to handle the load.

“We don’t have the staff to be able to handle 400 investigations in a year plus do all the other required work,” said Paul Bailey, director of the Plant Industries division of the Missouri Department of Agriculture.

In Missouri, farmers filed about 310 complaints over suspected dicamba damage, on top of the roughly 80 complaints about pesticides the state receives in a typical year, he said.

Nationwide, states launched 2,708 investigations into dicamba-related plant injury by Oct. 15, according to data compiled by the University of Missouri.

Of course, Monsanto has bet on dicamba-tolerant soybeans to replace those that withstand glyphosate, the key ingredient in RoundUp, because it has become less effective over the years as weeds develop resistance...and because of that pesky European research which suggests the product causes cancer.
The problem is that if you're not planting dicamba-resistant soybean seeds then you could quickly find yourself among the growing list of Monsanto's spray drift victims....so you better buy Monsanto seeds...see how that works?

Of course, Monsanto has decided to simply blame spray companies saying that the "herbicides are safe when properly applied."

Monsanto and BASF say the herbicides are safe when properly applied. They need to convince regulators after the flood of complaints to state agriculture departments.

The U.S. Environmental Protection Agency (EPA) last year approved use of the weed killers on dicamba-resistant crops during the summer growing season. Previously, farmers used dicamba to kill weeds before they planted seeds, and not while the crops were growing.

However, the EPA approved such use only until Nov. 9, 2018, because “extraordinary precautions” are needed to prevent dicamba products from tainting vulnerable crops, a spokesman told Reuters in a statement last week. The agency wanted to be able to step in if there were problems, he said.

Next year, the EPA will determine whether to extend its approval by reviewing damage complaints and consulting with state and industry experts. States are separately considering new restrictions on usage for 2018.

In conclusion, with Dicamba usage up for regulatory review, it seems that it may be time for Monsanto execs to start pulling some strings at the EPA again...
Posted by arclein at 12:00 AM