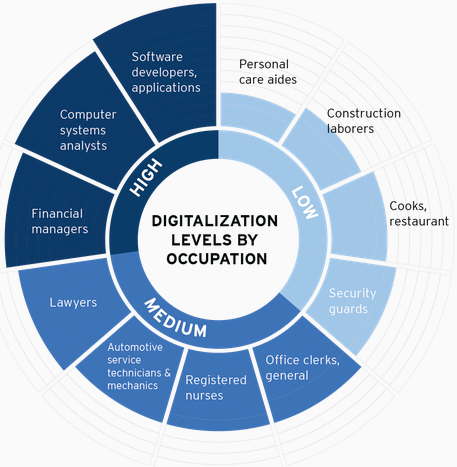 Well yes. Anything that needs to be done and also engages the mind is a prospect soon enough.  This is our technological revolution.  It will spawn a human revolution as well.
It will simply be no longer acceptable to be not have the mindset of an achiever. It never was, but this ethic must also return in order to raise the base well above all forms of poverty.  Accepting a check and then drinking it was never a viable proposition.  Our civilization will end that as rational ideas are progressively adopted.
The jump into our technological future has been fast.  Our human transition has been constrained by the need to allow the past to simply die out.  I have lived with one foot in the Nineteenth Century and the other firmly in the twenty first century.  Now is the time to merge the two and understand that digital progress itself is largely spent, or more correctly the digital bulge is almost past.
All other transitions including the coming conversion out of fuel based energy will be more physical. Even the transition of digital tech directly into our brains.
We will travel about in gravity cars while working with a screen in our internal vision field.  our task will be to manage local robotics and share anomalies and observe beauty.  we will play at physical work for joy.  That is not too far from where we are already at..
.
.
Nearly every job is becoming more digital — Brookings study

The shares of U.S. jobs that require substantial digital knowledge rose rapidly between 2002 and 2016 — mostly due to large changes in the digital content of existing occupations. (source: Brookings analysis of O*Net, OES, and Moody’s data)


Digital technology is disrupting the American workforce, but in vastly uneven ways, according to a new analysis of 545 occupations in a report published today by the Brookings Metropolitan Policy Program.


The report, “Digitalization and the American workforce,” provides a detailed analysis of changes since 2001 in the digital content of 545 occupations that represent 90 percent of the workforce in all industries. It suggests that acquiring digital skills is now a prerequisite for economic success for American workers, industries, and metropolitan areas.


In recent decades, the diffusion of digital technology into nearly every business and workplace, also known as “digitalization,” has been remaking the U.S. economy and the world of work. The “digitalization of everything” has increased the potential of individuals, firms, and society, but has also contributed to troublesome impacts and inequalities, such as worker pay disparities across many demographics, and the divergence of metropolitan economic outcomes.


While the digital content of virtually all jobs has been increasing (the average digital score across all occupations rose 57 percent from 2002 to 2016), occupations in the middle and lower end of the digital skill spectrum have increased digital scores most dramatically. Workers, industries, and metropolitan areas benefit from increased digital skills via enhanced wage growth, higher productivity and pay, and reduced risk with automation.


The report offers recommendations for improving digital education and training while mitigating its potentially harmful effects, such as worker pay disparities and the divergence of metropolitan area economic outcomes.


“We definitely need more coders and high-end IT professionals, but it’s just as important that many more people learn the basic tech skills that are needed in virtually every job, said Mark Muro, a senior fellow at Brookings and the report’s senior author. “Not everybody needs to go to a coding boot camp but they probably do need to know Excel and basic office productivity software and enterprise platforms.”


Key findings of the report


Uneven job growth: While job growth has been rapid in high and low digital level occupations, middle digital occupations (that can be more readily automated), such as office-administrative and education jobs, have seen much slower job growth.


Gender: Women, with slightly higher aggregate digital scores (48) than men (45), represent about three quarters of the workforce in many of the largest medium-digital occupational groups, such as health care, office administration, and education. But men continue to dominate the highest-level digital occupations, as well as lower digital occupations such as transportation, construction, natural resources, and building and grounds occupations.


Regional disparities: The most digitalized metros include Washington, Seattle, San Francisco and Boston; fast followers such as Austin and Denver; and university towns such as Madison and Raleigh. Locations with low digital scores include Las Vegas and several metros in California , including Riverside, Fresno, Stockton and Bakersfield.
Posted by arclein at 12:00 AM