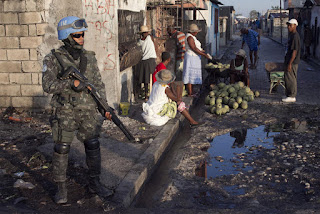 This is the most basic public health prevention measure. You make sure that all folks entering a disaster zone are clean. There was a reason we used to quarantine immigrants.  Do you really think that the risks have gone away?

You should also do the same for those leaving.  Fortunatley testing has mostly eliminated the actual need but it must be rigorously applied.


Quite simply someone bungled and if procedures do not exist, then the head of the agency needs to resign.  Someone somewhere failed to do his job and is guilty of negligent manslaughter.  Since 10,000 died, he has committed a crime against humanity as well..

The United Nations has admitted responsibility for the 2010 cholera epidemic in Haiti which killed more than ten thousand people.

Nearly six years after a cholera epidemic killed thousands of Haitians, the United Nations secretary general has confessed that U.N. peacekeepers likely caused the illness to spread. The admission of guilt comes after a report prepared by Philip Alston, a human rights lawyer and U.N. special rapporteur on extreme poverty and human rights, was leaked to the NY Times.

For the first time since a cholera epidemic believed to be imported by United Nation peacekeepers began killing thousands of Haitians nearly six years ago, the office of Secretary General Ban Ki-moon has acknowledged that the United Nations played a role in the initial outbreak and that a “significant new set of U.N. actions” will be needed to respond to the crisis.

The deputy spokesman for the secretary general, Farhan Haq, said in an email this week that “over the past year, the U.N. has become convinced that it needs to do much more regarding its own involvement in the initial outbreak and the suffering of those affected by cholera.” He added that a “new response will be presented publicly within the next two months, once it has been fully elaborated, agreed with the Haitian authorities and discussed with member states.

The 19-page report from Alston describes the failures of the U.N.’s handling of the outbreak. The U.N. initially sent rescue workers into Haiti after the 2010 earthquake. By mid-October 2010, people along the Meille River began dying from cholera. Victims of cholera typically die from dehydration caused by diarrhea and vomiting. A group of rescue workers have long been suspected of contributing to the outbreak which lead to the deaths of at least 10,000 people. According to The Times, “the first victims lived near a base housing 454 United Nations peacekeepers freshly arrived from Nepal, where a cholera outbreak was underway, and waste from the base often leaked into the river.”

Beatrice Lindstrom, a lawyer with the Institute for Justice and Democracy in Haiti (IJDH), called the U.N.’s admission “a groundbreaking first step towards justice.” Following the cholera outbreak, the IJDH filed a lawsuit against the United Nations on behalf of the cholera victims. “Up until now, the U.N. had refused to engage in any kind of conversation about their role in the cholera outbreak. It is still, though, far from being a formal apology,” told Reuters in a telephone interview.

Ban Ki-moon’s Deputy spokesman Haq told the Washington Post Alston’s report would likely be published in late September and presented by Ban at the U.N. General Assembly in October. Haq insisted that the U.N. welcomed the “vital report,” calling it a “valuable contribution to the U.N. as we work toward a significantly new set of U.N. actions.”

The United Nations has thus far not mentioned firing any officials or restructuring their leadership in response to the failures in Haiti. The controversy over the handling of Haiti and the spread of cholera is only one of many criticisms lodged at the U.N. As The Washington Post notes:

It follows accusations this year that U.N. peacekeepers have committed rape and murder in the Central African Republic, and more recently that they failed to defend aid workers against brutal attacks in South Sudan.

Critics say these scandals have laid bare the United Nations’ struggles to police its forces and investigate claims of wrongdoing and abuse, whether in cases of negligence — such as Haiti — or the allegations of more serious crimes in Africa.

To the conspiratorial-minded readers the U.N. confession may be a part of something more nefarious. It is well documented that the U.N. has an interest in tracking population growth and promoting methods of population control. In fact, Christiana Figueres, Executive Secretary of the U.N. Framework Convention on Climate Change (UNFCCC), is on recordstating that “we should make every effort” to reduce the world’s population. There is also the issue of National Security Memorandum 200, which was completed with the help of Henry Kissinger. The memo describes steps the United States should take to promote population control methods, including using organizations such as the U.N. to promote the agenda.

What are your thoughts? Was the spread of cholera in Haiti an unfortunate accident, or is there more to the picture? Leave your thoughts below.