Why a Trump Victory in November is a Virtual Certainty 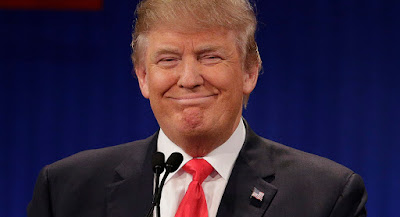 I  strongly recommend this analysis.  I have made many successful calls based on paying attention to the popular vote instead of the enthusiasms of newspapermen.  Here we see that the popular vote has shifted to Trump as a result of his no holds barred battle to drive the pretenders from the ring.

Remember we are merely asking two folks out of every one hundred to switch.  That is not much at all.  And it is now the strategic end game.

Trump will now easily campaign as a robust centralist Democrat as that is what he has always been.  After all the Republican party is going nowhere after he conducted his unfriendly takeover.  He owns it and they are all lining up to make smiley faces in the hope of whatever crumbs come their way.

Astonishingly, even the radical left who is union centric has common cause with him.  Many may stay home as he is espousing their cause as well.

Add in the accelerating collapse of  Clinton fortunes and the desperate last minute attempts by the Democrats to regig their campaign and he may well be campaigning against a ghost as well.
.

Why a Trump victory in November is a virtual certainty

To venture the prediction that Donald Trump is a sure bet to be elected President in November sounds about as outlandish, perhaps even ludicrous and delusional as anything coming out of the mouth of the candidate.

Polls, on the average, as tracked by RealClearPolitics and the Huffington Post, along with prediction markets like PredicIt and the Iowa Electronic Market, as well as several models featured at the recent meeting of the American Political Science Association all agree that Hillary Clinton is the heavy favorite to win.

One model, however, begs to differ. It is one that, with slight variations, has accurately predicted the winner of the popular vote in each of the last five presidential elections, ever since it was introduced in 1996.

Dubbed the “Primary Model,” it puts much stock in using primary results to forecast the vote in the general election. It also takes advantage of a historical tendency of the electoral pendulum to swing back and forth between the two parties. Both factors favor Trump over Clinton in 2016.

Trump proved to be the stronger candidate in primaries, according to the metric used by the model, and the electoral pendulum is poised to swing back to the Republican side after two Democratic terms in the White House under Barack Obama. The Primary Model predicts that Trump will defeat Clinton by 52.5 percent to 47.5 percent of the two-party vote. It is 87-percent certain that he will be the next President.

How does the model produce this forecast?

To begin with, the predictive power of primary elections was revealed, though not noticed by anyone, the first time a significant number of states used them for the presidential nomination. The year was 1912. That they have been around so long may come as a surprise to many. Republican William Howard Taft was in the White House, seeking a second term. Theodore Roosevelt challenged Taft for the GOP nomination and beat him soundly in the party’s presidential primaries.

The Republican convention nonetheless handed Taft the nomination. On the Democratic side, Woodrow Wilson was the winner in that party’s primaries, received the nomination and went on to win the general election. Lesson: the party with a primary winner beats the one with a candidate loser. The 1912 case is no fluke. In general, the party with the stronger candidate in primaries tends to win in November.

My forecasts of the 2000-2012 elections used only the first primary, the one in New Hampshire, making it possible to offer a forecast early in the election year. That may prove to be a risky choice, however, for an election in which one of the candidates has strong support in a group of voters that barely exists in New Hampshire.

In 2016, Hillary Clinton was such a candidate with her support from African-Americans. So to assess primary performance in 2016, I also included the second primary, the one in South Carolina, where African-Americans make up a large portion of the Democratic electorate.

For the record, Clinton lost in New Hampshire and then won in South Carolina. On the Republican side, Donald Trump won both.

According to the standard metric of the model, which calculates primary performance of a candidate as a percentage of votes cast for the top two finishers in a primary, Trump wound up with a higher average based on the returns from New Hampshire and South Carolina than did Clinton. Trump’s superior primary performance bodes well for a victory over Clinton in November.

In addition to primaries, the swing of the electoral pendulum generates predictive power. Even a casual observer of presidential elections may have noticed a distinct pattern: the party in the White House wins re-election after one term almost all the time, but much more rarely after two terms. In fact, during the last 65 years, the party in power has managed to win three terms in a row only once: in 1988.

Over the long haul since 1828, according to my statistical estimates, the White House party has averaged 2.6 terms in office. A third term is not out of the question, but not very certain either.
It depends on how well the White House party did in winning a second term compared to its winning the first term. Doing better in the re-election makes a third term more likely; doing worse makes change more likely.

To return to the 1988 case, Ronald Reagan defeated President Carter in 1980 by about 10 points and then won re-election in 1984 by nearly double that margin. The Reagan revolution was still churning, which was good news for George H.W. Bush, the GOP nominee in 1988.

In contrast, Obama won re-election in 2012 with a margin half the size of his win in 2008. The appeal of “Hope and Change” was wearing off. Bad news for Hillary Clinton in 2016.

So from the start, Republicans could count on the swing of the electoral pendulum to recapture the White House in 2016. With his superior showing in early primaries Donald Trump markedly raised the chances of victory in November. The prediction formula of my model, based on elections from 1912 to 2012, gives Trump 52.5 percent of the two-party vote, making it all but certain (87 out of 100) that he will be the next President.

The forecast, to be sure, is about the popular vote, not the vote in the Electoral College. But with a 5-point popular-vote lead it is virtually impossible to lose out in the electoral tally.
Posted by arclein at 12:00 AM