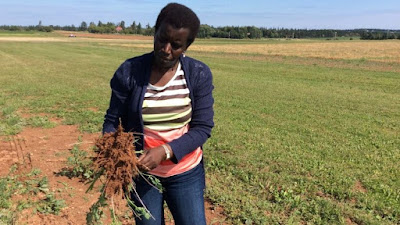 This plant must apply to many other rotations as well.  the fact that it actually fumigates the soil is impressive and important in terms of soil conditioning.

The number of cuttings is also highly impressive although rain will have a lot to say about that.  Sudengrass makes excellent fodder as well and is used extensively in the USA in hotter conditions.

All good. I like the natural suppression of nematodes.
..
.
P.E.I. scientists see growing potential for sorghum sudangrass

You may not have ever heard of sorghum sudangrass but if you live on Prince Edward Island, it could be coming soon to a potato field near you.

A team of researchers with Agriculture Canada are growing test plots of the fast-growing grass in Harrington, P.E.I., comparing it side by side to other rotation crops such as red clover.

"We are interested in this grass because it's fast-growing and can be a good alternative for potato growers," explained Dr. Judith Nyiraneza, part of the research team.

"The interest for us is because we want to increase the soil's organic matter," added Nyiraneza, who sits on the Soil Improvement Working Group of the P.E.I. Potato Board along with potato growers.
"The sorghum sudangrass will be like a soil builder and it will help the soil to be restored."

The grass can grow up to 12 feet tall, but it's usually cut at five feet. It's mowed multiple times over the season.to promote the root system to expand as the grass re-grows.

'The proof is in the pudding'

A growing number of potato growers are also experimenting with sorghum sudangrass, including Jonathan MacLennan, who grows 725 acres of potatoes in West Cape.

"I put it on some of our poorer fields to really give it a good test and we have them in potatoes this year, and the potatoes seem to be holding up better," observed MacLennan.

Sorghum sudangrass and its thick root system "mellowed the ground," according to MacLennan.

"As the roots go down, they bust up the hard pan and there's also a natural fumigant, a gas released every time you mow it, and it combats verticillium wilt and nematodes."

MacLennan is part of a project through the P.E.I. Potato Board called AIM, which is aimed at increasing potato yields, and he'll be spreading the word about what he's seen with sorghum.

"The proof was in the pudding this year with our potato crop, with the fields certainly look better than they used to. We'll definitely be using this rotation more," he said.

"I didn't think there would be that quick of a change in two years. I was happily surprised."

P.E.I. Potato Board research coordinator Ryan Barrett recently toured the test plots at Harrington, and says there is a buzz around sorghum sudangrass.

The project at Harrington is part of a large national study by Agriculture Canada focusing on improving potato production in Canada.

"This is the first year so we will know the results probably three years from now," explained Nyiraneza.

"It's exciting because we are all the time looking for alternatives to help our growers, not only to increase their potato yield but also to build the soil for future generations."

For those of us having grown up in Eastern Colorado-Western Kansas, sorghum sudangrass is well known. Raised as a forage crop, it has always been popular because of it's drought tolerance. I'd never heard of this application before but that's good in the plant is already beneficial.