Why didn't the Latin language Thrive? 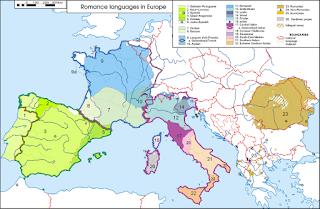 A very good question best answered in the item below.  It just is not dead.  Languages do devolve into dialects, but always retain their core vocabulary while shifting sounds somewhat.  It took public radio to recenter English everywhere from this phenoena.

English is actually an unusual hybrid of the two core languages  of Latin and German and both are Indo European derived with much in common  with Sanskrit.  Sanskrit has deeper roots than any..


Why didn't the Latin language thrive and spread like the use of English today given it had the powerful backing of the Roman Empire?

It is dead today.

I will tell you a little story. A little under a year ago I was on a business trip to Europe. In meeting in Italy there were six of us: two Italian speakers, two Portuguese speakers and two Spanish speakers. Can you guess the language we were using in tha meeting? Are you sure? Well, you're wrong: each one of us used his mother tongue and we were perfectly able to understand each other, only having to explain a word every now and then.

The reason why this happened is beacause Italian, Spanish and Portuguese are in the end just different dialects of Latin. We call them languages because they're established as official languages of different nations*, but I'm sure a Roman legionarie would find less differences between them than what were found in Latin as spoken in different parts of thr Roman Empire back in the day.

Just considering the three languages I mentioned you have 680 million native speakers, which reach 750 million if you add French as well. Latin doesn't look much dead to me.

* Linguist Max Weinreich said that a language is a dialect with an army and a navy.
Posted by arclein at 12:00 AM