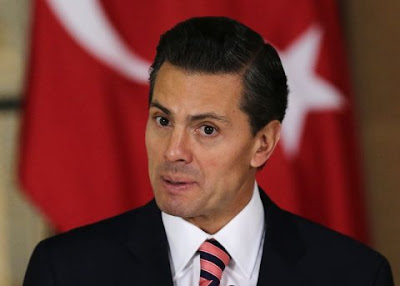 What happened is that he came to his senses and stopped playing word games.  Confronting these problems is terribly necessary if progress is to be made.  It needs to also be remarked that all Trump was doing is saying in plain language what the border personnel have been saying for a long time.


When your opposition ignores facts on the ground in order to spin a political narrative, we are stepping on treacherous ground.


After saying that, the facts are the facts and the next president must tackle those problems.  Yet we have had an administration that has generally been hands off and only meddling to push a political agenda..  They have had their eight years to deal with all these problems.  Are they handled?

Since then it is noteworthy that Democrat propaganda has gone quiet on Mexico ceding the issue to trump and may actually be the outcome of all this noise..


Based on what happened Wednesday, when GOP presidential candidate Donald Trump traveled to Mexico and held a joint news briefing with the nation’s president, Enrique Peña Nieto, one could argue that the billionaire candidate has won.

During the briefing, Peña Nieto lauded Trump for his “genuine interest” in “build(ing) a relationship that might lead us to prove both our societies better conditions,” according to The Washington Times.

He also admitted that the North American Free Trade Agreement needs to be improved, the porous border must be secured and, more importantly, criminals have indeed been taking advantage of the weak border to transport guns, drugs, slaves and money between Mexico and the United States, as Trump has long argued.


So despite President Barack Obama, Democrat nominee Hillary Clinton and the liberal media claiming nonstop how Trump’s candid rhetoric about illegal immigration would irrevocably harm our relationship with Mexico, it appeared that the relationship was just fine and dandy.

Moreover, the fact that Nieto conceded nearly every one of Trump’s points demonstrated that his tough-talking method of international diplomacy possessed more merit and future potential than Obama’s deliriously pitiful “do with me as you like” strategy of appeasement.

The Mexican president also reportedly took direct shots at Obama by complaining about the guns that were smuggled into his country during Operation Fast and Furious — and also scolding him for having ostensibly erected a “welcome” sign over the border that, incidentally enough, has spurred problems in Mexico as well as the U.S.

“There is still a joint challenge including the increasing number of non-Mexicans who cross through our country in order to reach the United States, therein creating serious human crises,” he explained.

Yet two years ago, President Peña Nieto sang an entirely different tune, claiming at the time that it was morally wrong for the United States to oppose illegal immigration.

It’s crazy how much things can change when a real leader takes charge.

Please share this story on Facebook and Twitter and let us know what you think about the fact that the Mexican president conceded nearly every one of Donald Trump’s points on immigration policy!
Posted by arclein at 12:00 AM