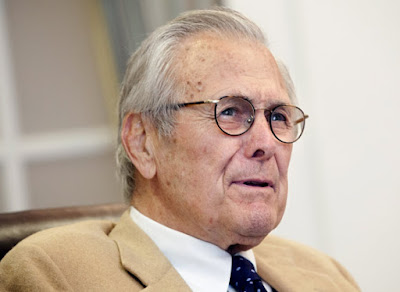 Donald Rumsfeld is one of those thinkers you check in with just in case you missed something.  The media is not listening to him because they wish not to but that is their loss.  The hard reality is that the American people may well have already made up their minds and all sound evidence tells us that we are roaring to a Trump presidency.

You may be sure that our allies know this as well.

Donald called for a revamped NATO over a decade ago.  Nothing has happened.  This is something that Obama could well have led..

AMAZING: Donald Rumsfeld HAS ROCKED The Presidential Race WITH HIS ANNOUNCEMENT about Trump!

Mr. Donald Rumsfeld, the former Secretary of Defense has joined the Team Trump for the presidential run. He is a big endorsement for Donald Trump’s campaign. People like him are crucial in order to get people’s sympathies. He is sure that he has made the right decision, choosing Trump.

And who is the master, king of the neocons? Donald Rumsfeld!

First Colin Powell, then Jeb Bush’s son, then John McCain’s daughter, now Rumsfeld, who is next, Ann Romney? Let’s hope! United republicans behind Trump, that is what we need!

Rumsfeld, 83, was interviewed by The Daily Mail and voiced wide support for Trump’s policies. He echoed Trump’s comments that widespread resettlement of Syrian refugees into the United States could be a Trojan Horse for terrorists seeking to enter the county.

“He’s absolutely right,” Rumsfeld said. “Anyone who thinks the radical Islamists are not going to try to utilize every venue they can find to infiltrate in the United States, and in western European
countries, to achieve their goals – these people just don’t get it. …

They’ve announced what they’re going to do,” he said.

Rumsfeld said that he and Trump arrived at the same conclusion about the refugee crisis, but took different paths.

“We’ve got an enormous obligation” to help fleeing Syrians, he said, “and the United Nations is so incompetent and inept and unhelpful … this refugee problem is the most heartbreaking thing in the world.”

Rumsfeld agreed with Trump that the answer is not mass migration to America, but the creation of safe havens in the Middle East created by regional powers.

Rumsfeld then compared his approach with that of Trump.

“How is what I’ve said different from what he’s said?” he asked. “The way he said it got him the Republican nomination for president. The way I said it makes people’s eyes glaze over” but is “less concerning to some people.”

“The only real difference is one is striking a nerve,” Rumsfeld said.

Rumsfeld also agreed with Trump’s vision for a revamped NATO, saying media characterizations of Trump’s call for changes have not been accurate. He also noted that what Trump called for in terms of a new structure of the alliance is “not far from what I wrote … to President Bush 13 or 14 years ago.”

NATO, he said, was “fashioned during the Truman administration, and they do need to be updated for the 21st century and the information age,” he added.

Rumsfeld said that endorsing Trump over Democrat Hillary Clinton was “not a close call.”

“I don’t believe Hillary Clinton is qualified to be President of the United States,” he said, adding, “‘What she has done with classified information I think is inexcusable and puts at risk people’s lives (and) not just ours.”

Salute Mr. Donald Rumsfeld for making the right choice. While nearly everyone of the political figures in Washington is against Trump, he has chosen to run WITH HIM! He knows that there are many positive things that Mr. Trump has to offer to the American people.

What do you think about this? Do you also think he made the right choice?
Posted by arclein at 12:00 AM