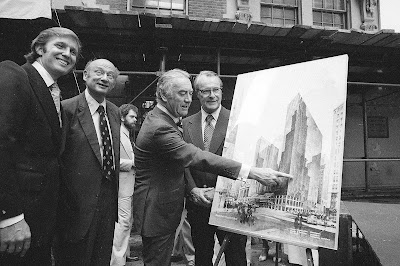 Every successful city makes deals and provides benefits to their best developers in order to build out their city successfully. Somehow they understand that this takes great resources in terms of accessing capital from the banks and that they must make it as low risk as possible.

The Donald needed to get those bonuses as in the front end of a highly leveraged build out a mere $15,000,000 can make all the difference in avoiding a thirty year multi million dollar per year drain that stops the deal.  He still took on the risk of a successful build.  It is his good fortune and attention to detail that he normally does not lose right there.

We can be sure that his competitors see costs and problems that he is best able to avoid which is why these tax breaks appear.

Remember Olympia and York?.  Much richer than the Donald, they miscalculated in London while literally creating a new city center in Canary Wharf.  It should be blindingly obvious that you do not strand the top developers unless you want no developers which then drives the cost of building to a level sufficient to offset the real risk.

In the end these types of slanted stories represents ignorant jealousy at its worst. Any goat can pick the winners after the fact and carp on the excess profit but never be there when the hat is passed around to break sod.
.

Donald J. Trump, left, with Mayor Ed Koch, center and New York Gov. Hugh L. Carey, pointing to a rendering of what would become the Grand Hyatt Hotel, in June 1978. A crucial factor behind the hotel’s construction was 40-year tax break that has cost New York City $360 million to date.CreditAssociated Press

The way Donald J. Trump tells it, his first solo project as a real estate developer, the conversion of a faded railroad hotel on 42nd Street into the sleek, 30-story Grand Hyatt, was a triumph from the very beginning.

The hotel, Mr. Trump bragged in “Trump: The Art of the Deal,” his 1987 best seller, “was a hit from the first day. Gross operating profits now exceed $30 million a year.”

But that book, and numerous interviews over the years, make little mention of a crucial factor in getting the hotel built: an extraordinary 40-year tax break that has cost New York City $360 million to date in forgiven, or uncollected, taxes, with four years still to run, on a property that cost only $120 million to build in 1980.

The project set the pattern for Mr. Trump’s New York career: He used his father’s, and, later, his own, extensive political connections, and relied on a huge amount of assistance from the government and taxpayers in the form of tax breaks, grants and incentives to benefit the 15 buildings at the core of his Manhattan real estate empire.

Since then, Mr. Trump has reaped at least $885 million in tax breaks, grants and other subsidies for luxury apartments, hotels and office buildings in New York, according to city tax, housing and finance records. The subsidies helped him lower his own costs and sell apartments at higher prices because of their reduced taxes.

Mr. Trump, the Republican nominee for president, has made clear over the course of his campaign how proud he is that “as a businessman I want to pay as little tax as possible.”

While it is impossible to assess how much Mr. Trump pays in personal or corporate income taxes, because he has refused to release his tax returns, an examination of his record as a New York developer shows how aggressively he has fought to lower the taxes on his projects.

Mr. Trump successfully sued the administration of Mayor Edward I. Koch after being denied a tax break for Trump Tower, his signature building on Fifth Avenue. Two decades later, in a lawsuit that spanned the administrations of Mayors Rudolph W. Giuliani and Michael R. Bloomberg, he won a similar tax break for Trump World Tower, a building on First Avenue with some of the city’s highest-priced condominiums in 2001.

The tax breaks for those two projects alone totaled $157 million.

The tax break at the 44-story Trump International Hotel and Tower at Columbus Circle came to $15.9 million.

No possible subsidy was left untapped. After the terrorist attacks on the World Trade Center, Mr. Trump lined up a $150,000 grant for one of his buildings near ground zero, taking advantage of a program to help small businesses in the area recover, even though he had acknowledged on the day of the attacks that his building was undamaged.

“Donald Trump is probably worse than any other developer in his relentless pursuit of every single dime of taxpayer subsidies he can get his paws on,” said Alicia Glen, Mayor Bill de Blasio’s deputy mayor for housing and economic development, who first battled Mr. Trump when she worked in Mr. Giuliani’s administration.

In seeking those subsidies, Mr. Trump is not that different from many other developers. But the level of subsidies he has received along with his doggedness in claiming them seem at odds with his rhetoric as an outsider candidate who boasts of his single-handed success and who has denounced what he calls the pay-to-play culture of politics and a “rigged” system of government.