Mainstream Media Admits It May "Never Recover" From 2016 Election 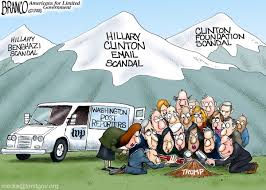 What has been ignored is that the elections in 2008 and 2012 placed Obama in a bubble and focused all media ire against his hapless opponents.  There were huge questions regarding Obama's competence that remain apparent to this day even after eight years of on the job training.  That he has now relied on executive order to effect changes is actually outrageous and reflects the reality that he has scant capacity to enact actual laws.

Somewhere the media stopped reporting and bought in as the Federal Propaganda Department with a profound lack of curiosity on obvious issues that actually matter.  Critical thinking has been driven mostly out to the Blogosphere.

On an issue such as global warming, we should be seeing argument and counter argument roaring back and forth week after week to fire up the engaged.  After all, we are talking about the weather and that happens to be everybody's favorite conversation topic.

.
Mainstream Media Admits It May "Never Recover" From 2016 Election

In a revealing statement that flew largely under the radar earlier this month, the mainstream media admitted it would never recover from its irresponsible and negligent coverage of the 2016 presidential election. A recent column published in the New York Post referred to the media’s reporting as “the complete collapse of American journalism as we know it.”

In his article for the Post, Fox News contributor Michael Goodwin discussed the media’s pro-Clinton bias – one recognized by supporters of virtually every other presidential candidate, from Bernie Sanders to Jill Stein to Gary Johnson and, of course, Donald Trump. Even Americans who don’t necessarily have a horse in the 2016 race notice the slant.

“By torching its remaining credibility in service of Clinton,” Goodwin wrote, “the mainstream media’s reputations will likely never recover, nor will the standards. No future producer, editor, reporter or anchor can be expected to meet a test of fairness when that standard has been trashed in such willful and blatant fashion.”

Indeed, he is correct in this regard. The Clinton machine has effectively infiltrated corporate media. Last year, the Intercept reported MSNBC failed to disclose that multiple pundits who spoke favorably about Clinton were actually employees of a consulting firm hired by her campaign.

More recently, embarrassing DNC leaks released in July revealed DNC officials attempted to craft narratives painting Sanders in a negative light to undermine his campaign. They also organized a secret fundraiser with the Washington Post and were careful to keep it under the radar. Debbie Wasserman-Schultz, the now-disgraced former chairman of the DNC, along with one of her colleagues, personally contacted MSNBC to complain when one of its anchors criticized Clinton and suggested she drop out. Per a “deal” with the DNC, one POLITICO writer sent an article critical of Clinton to the DNC for suggestions before he sent it to his editor.

Though Goodwin has previously implied he does not support the Republican nominee, he still argues “Any reporter who agrees with Clinton about Trump has no business covering either candidate.”

There is no question the mainstream media has sided with the political establishment in its decision to craft narratives that paint Clinton as a competent leader who is the only option in the face of a catastrophic Trump presidency. Indeed, in spite of Clinton’s lack of popularity among the general population, the media continues to suggest she is the only thing standing between America and its descent into fascism.

While the degree of negative press Trump has received is undeniably staggering, Goodwin failed to recognize — at least in this article — that like Clinton, Trump is wildly unpopular and dangerous. Though mainstream media is undoubtedly fervent in their coverage of Trump’s absurdity, it is arguably irresponsible not to point out the gaping problems with his xenophobic, violent, non-factual rhetoric.

But therein lies the problem: rarely does the mainstream media devote as much time to questioning Hillary Clinton, her rhetoric, and her policies. As the Hill noted earlier this month:

“Some would argue that Trump deserves it because of controversial rhetoric or falsehoods around X, Y, Z… [But] when looking at honesty/trustworthy numbers, it’s Clinton who — in the eyes of the public — has more issues in that department.”

As Politifact documented, Clinton has lied on multiple occasions, and the media’s lack of outrage and refusal to focus on her dishonesty lends credence to Goodwin’s assertions.

Goodwin is openly right-wing. He appears regularly on Fox News and has previously asserted President Obama is not doing enough to combat Islamic extremism. And though he is correct in pointing out the pro-Clinton bias, his employment at the New York Post and ongoing appearances on Fox — two icons of mainstream media — obliterate any chance of his media criticisms being taken seriously.

The New York Post has been owned by Rupert Murdoch’s News Corp. since 1976. In that time, the Post has developed a reputation for sensationalism and inaccurate reporting. While they deserve mild credit for covering controversial issues like police brutality and the secrecy and corruption surrounding the infamous 28-pages of the 9/11 commission report, a long line of ethical controversies mars their credibility — so much so that even a Fox News anchor has questioned the paper’s legitimacy.

Little needs to be said about Fox News’ out of touch, delusional take on the world, though it is worth noting that according to an analysis by Politifact, 58 percent of Fox News’ content is mostly false, false, or “pants on fire.”

The reputations of the New York Post and Fox News precede Goodwin’s argument, no matter how true it may be that the media is in Hillary Clinton’s pocket. What his assertion should have contended is that American journalism was a lost cause long before the 2016 election — something Americans have increasingly and rightfully begun to recognize.

From the corporate media’s flagrantly irresponsible coverage of the Iraq War during the Bush years to the media’s ongoing blackouts of relevant news in favor of more superficial, inconsequential stories, Goodwin’s assertion that 2016 is the year American journalism died is as factual as the content churned out by Fox News.

2016 has merely been its funeral procession.
Posted by arclein at 12:00 AM