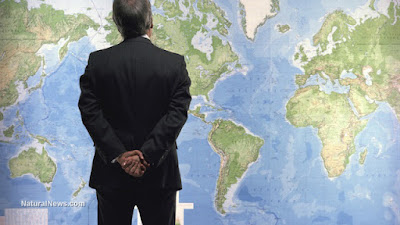 This is the correct way to answer the 97 percent nonsense.  The hard reality is that even fully engaged scientists are at best uncommitted and should be!  Worse, the evidence of the past eighteen years has been amazingly neutral after the brief peak that occurred in 1998.

However it has been neutral but warmed up which provides a shifted range of temperature variation or should.  Thus we have had a better climate for twenty years.

I have good reason to expect a downward shift in the next two decades as against a further upward shift. In fact, were i a betting man i would give odds on it if i could discover a way to actually measure it with confidence and no meddling.  Certainly the worst of the warming effects have ameliorated.


More scary is that a sharp drop is also possible, but a much lower probability.  It simply may not happen..

NaturalNews) The highly-politicized climate change debate rages on as we approach the crucial 2016 U.S. presidential election, despite an ever-growing body of evidence revealing the fact that "catastrophic man-made global warming" is nothing more than an elaborate hoax.

And the November election may prove to be a victory for the hoaxers, according to experts who happen to be among those who dare to challenge the spurious climate change narrative.

One of these experts is Weather Channel founder John Coleman, who is now warning that the election could prove to be a "tipping point" in favor of people like Al Gore, who continue to amass vast fortunes based on the global warming scam.

In a recent interview with Climate Depot, Coleman said:

"Al Gore may emerge from the shadows to declare victory in the 'global warming' debate if Hillary Clinton moves into the White House. Yes, if that happens and the new climate regulations become the law of the land, they will be next to impossible to overturn for four to eight years."

Climate change proponents remain undeterred in their mission, ignoring numerous recent scientific findings indicating that there has been no warming trend at all for nearly two decades.

Al Gore's dire predictions of the melting of polar ice on a massive scale have proved to be completely false. In fact, in 2014 - a year that was touted as being "the hottest ever" in the Earth's history - there were record amounts of ice reported in Antarctica, an increase in Arctic ice, and record snowfalls across the globe.

On top of those "inconvenient truths," the White House's assertion that 97 percent of scientists agree that global warming is real has been completely debunked. Several independently-researched examinations of the literature used to support the "97 percent" statement found that the conclusions were cherry-picked and misleading.

More objective surveys have revealed that there is a far greater diversity of opinion among scientists than the global warming crowd would like for you to believe.

From the National Review:

"A 2008 survey by two German scientists, Dennis Bray and Hans von Storch, found that a significant number of scientists were skeptical of the ability of existing global climate models to accurately predict global temperatures, precipitation, sea-level changes, or extreme weather events even over a decade; they were far more skeptical as the time horizon increased."

Other mainstream news sources besides the National Review have also been courageous enough to speak out against the global warming propaganda - even the Wall Street Journal published an op-ed piece in 2015 challenging the Anthropogenic Global Warming (AGW) pseudoscience being promulgated by global warming proponents.

And, of course, there are the more than 31,000 American scientists (to date) who have signed a petition challenging the climate change narrative and 9,029 of them hold PhDs in their respective fields. But hey, Al Gore and his cronies have also ignored that inconvenient truth, as well.

Many of those scientists who signed the petition were likely encouraged to speak out in favor of the truth after retired senior NASA atmospheric scientist John L. Casey revealed that solar cycles are largely responsible for warming periods on Earth - not human activity.

Al Gore and cronies continue getting richer from the global warming hoax But the global warming crowd continues to push their agenda on the public while lining their pockets in the process. If you're still inclined to believe what Al Gore has to say about global warming, please consider the fact that since he embarked on his crusade, his wealth has grown from $2 million in 2001 to $100 million in 2016 - largely due to investments in fake "green tech" companies and the effective embezzlement of numerous grants and loans.

You might want to take all of this information into serious consideration before casting your vote in the November election.