Trump By A Landslide? 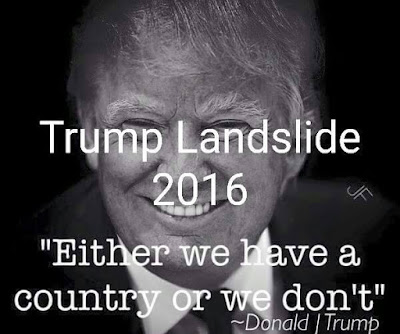 I want to add something to this thought.  It is that this past several months has allowed Trump to occupy head space in every American voter.  Better yet he chose to enrage them whenever possible, This forced them to become emotionally engaged.  Today we have an emotionally engaged electorate who are seeing his ample strengths and also learning to forgive him. This happens to be wonderful salesmanship and it is the type of leadership that gets things done.

Today he is driving a consensus on immigration reform and sucking Mexico into the process willy nilly.  If rational argument only begat rational argument, you introduce a tornado that clears the table at the least.  He has just done all that while leaving the White House looking ineffective and causing everyone to forget what Hilary said yesterday.

Better yet he gets his immigration policy speech listened too, a coup pulled off by no other politician likely in history.  I can not think of a more potentially boring topic than the fine details of immigration policy.  If three hundred million Americans each wrote an immigration policy paper, imagine the pain of reading any of them.

He is selling you on the clear reality that he really can do the job.  You the voter have now passed through emotions of denial. dismissal, outright rejection and here he is still firing and getting things done.  You are now well prepped to accept the inevitable and to actually support this man.  You only have to say yes once.

The real numbers tell us that he is clearly on track for landing a plus sixty percent vote with much of it coming from the traditional democrat base.  Recall please that this man has been a centrist Democrat in sympathy all his life.  By lifting the Republican vote in the primaries, he has unhinged the hard core Republican vote by hijacking them to his banner. Now he can walk and talk convincingly like a Democrat and allow all democrats to come home to Daddy. Deliberate or otherwise the strategy is powerful and effective.

Mounting enthusiasm will Roust out the Republicans and the Democrats to his side and there will be no stopping him.  Remember he has the Republican vote now by default and there is no better way to fire it up than to successfully confront Hilary.  And i also think he knows how to cheer lead.

Please let us recognize true genius at work for what it truly is and remember he loves to build.  He is also a smart centrist Democrat who is a patriot and has clear policy objectives...

Trump By A Landslide?
by Tyler Durden
Aug 29, 2016 9:40 AM
Submitted by Charles Hugh-Smith via OfTwoMinds blog,


Based on this analytic structure, Trump may not just win the election in November--he might win by a landslide.

If we believe the mainstream media and the Establishment it protects and promotes, Trump has no chance of winning the presidential election. For starters, Trump supporters are all Confederate-flag waving hillbillies, bigots, fascists and misogynists. In other words. "good people" can't possibly vote for Trump.

Even cartoon character Mike Doonesbury is fleeing to Vancouver to escape Trumpism. (Memo to the Doonesbury family: selling your Seattle home will barely net the down payment on a decent crib in Vancouver.)

For another, Trump alienates the entire planet every time he speaks.

The list goes on, of course, continuing with his lack of qualifications.

But suppose this election isn't about Trump or Hillary at all. Suppose, as political scientists Allan J. Lichtman and Ken DeCell claimed in their 1988 book, Thirteen Keys to the Presidency, that all presidential elections from 1860 to the present are referendums on the sitting president and his party.

(Lichtman published another book on his system in 2008, The Keys to the White House: A Surefire Guide to Predicting the Next President.)

Author/historian Robert W. Merry sorts through the 13 analytic keys in the current issue of The American Conservative magazine and concludes they "could pose bad news for Clinton."

Whether the 13 issues are positive or negative for the candidates is of course open to debate, but consider what it means that Trump won the Republican nomination despite the near-universal opposition of the Establishment.

Consider that some polls found that 68 percent of adults think the country is on the wrong track and a recent average of six polls on the subject concluded that 64% of adults feel the nation is moving in the wrong direction.

This means 2/3 of the nation's adults no longer buy into the Establishment/ mainstream media's narrative that the economy is expanding nicely, things are going in the right direction and Hillary Clinton has a lock on the presidency.

Based on this analytic structure, Trump may not just win the election in November--he might win by a landslide--with landslide usually being defined by an overwhelming advantage in electoral college votes or 60% of the popular vote.

As improbable as this may seem at the moment, consider the improbability of Trump capturing the Republican nomination. Consider the nature of Clinton's support: a mile wide (encompassing the entire Establishment) but only an inch deep.

As I have noted before, there are very few ways left to stick your thumb in the eye of the elitist, predatory, self-serving Establishment that won't get you tossed in prison other than voting against their candidate, which in this election is Hillary Clinton.

Memo to Clinton supporters: if you want to persuade the American public the nation is going in the right direction, you'll have to actually change the direction rather than just promise more of the same.
Posted by arclein at 12:00 AM