The Regulatory Industry Is Growing Faster than the Real Economy

This actually is a policy problem.  By that i mean that the expense of regulation has no natural external driver.  After all, once an individual has the authority to regulate, or more specifically to chose a rule for all participants to follow, his core job is over.  Participants can then be expected to complain when transgressions arise.

Again the individual can assume the power of judgement and resolve the issue and it is over.

Where all this fails is that it allows for the expansion of make work in the form of information gathering not asked for.  This generates staffing.  Failure to decide also promotes studies and all that.  This is typical bureaucratic creep that changes nothing except to produce jobs for the boys.

In time you end up with a mass of folks writing memos to each other while attempting to squeeze meaning out their tasks.

It takes hard nosed management to stop this creep.
.


The Regulatory Industry Is Growing Faster than the Real Economy

nt to work in a field that has more than quadrupled in size since 1960? Consider being a regulator for the federal government. Even during the last recession, the regulatory agencies were hiring.

In 2015, the U.S. government employed more than 277,000 regulators. To put that number in perspective, it’s 50,000 more workers than General Motors Co. employsthroughout the entire world.

The Fourth Branch of Government

We’ve all heard of the regulatory agencies that constitute the “fourth branch” of government. It has cost our economy over $100 billionduring the Obama administration.

But it wasn’t always like this. We haven’t always lived in a world where unelected bureaucrats could fine a man $55,000 for taking photos of his friend’s art project.

Using data from the annual federal budget, Dudley and Warren have recorded the number of federal regulators and the amount of taxpayer money given to them for each year since 1960. All monetary figures that they report are in inflation-adjusted 2009 dollars.] 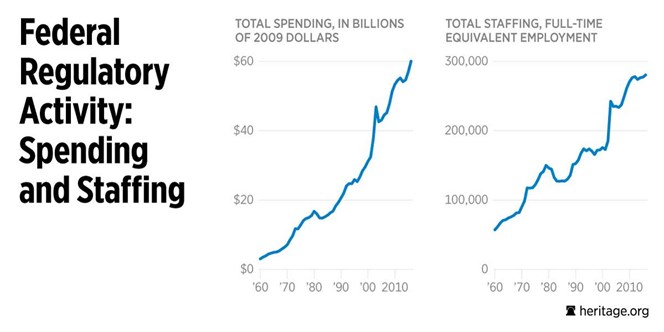 Tip of the Iceberg

While their data show federal regulation has exploded since 1960, it’s important to realize that they included only regulatory agencies that explicitly restrict business transactions in the private sector.

That means the 277,000 regulators they recorded in 2015 didn’t include anyone from the Internal Revenue Service, Social Security Administration, Defense Department, or the Centers for Medicare and Medicaid Services—even though these agencies account for roughly one-third of all final rulemaking actions in a typical year.

However, even without these agencies, it’s apparent that the size of federal regulation is massive compared to what it once was. From 1960 to 2015, the amount of taxpayer money allocated to federal regulators increased by more than 1,800 percent, from $3.06 billion to $57.05 billion.

The growth of federal regulatory agencies has not been limited to any particular field or industry.

Even when the rest of the country is doing poorly, the regulators do well.

From 2014 to 2015, the economy grew by only 2.6 percent, while the regulatory business grew by 4.3 percent. So if you’re looking for work and the private sector isn’t hiring, you can always try finding work as a bureaucrat in the industry that never shrinks.
Posted by arclein at 12:00 AM