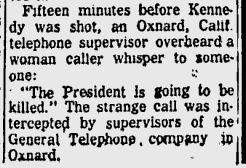 This makes sense of course.  Have someone on the assassination team be on the security team as well.  We already have identified at least three sniper locations if not four and having a member of the security detail to act as insurance makes the plan as fool proof as can possibly be.


However, whatever actions he took are not clear at all as no other witness caught on.  He may have never needed to actually act as the kill shot was perfectly final and easily visible to someone not surprised.

As important, it clarifies Oliver Stone's confidence in the general narrative. You really need to know an insider.  In fact it has been insiders talking that has allowed this whole tale to be pieced together.  Even Oswald was an insider used as a dupe.  I wonder if someone like his handler told him to meet him at the theater?  It would not do for him to go missing long enough to know he was the bullseye.

Filmmaker Oliver Stone, who directed the film “JFK,” recently claimed to have evidence that President John F. Kennedy was assassinated by someone on his own team.

The news came by way of a deathbed confession by someone Stone referred to as “Ron,” who claimed he was part of the former president’s security team.

Stone said that Ron had only told his son about what he knew all these years, but now he wanted to tell the world that “somebody from his own team … had fired on the president.”


Stone said Ron communicated with him through secret messages before they met, the U.K. Express reported. The director added that he was skeptical because there have been so many stories and allegations about Kennedy’s death and the shooter.

However, after hearing the man’s story, Stone said it sounded authentic and could be “plausible.”

“And his memory of it was so technical, filled with military jargon, details about radio communications right after the shots,” Stone said.


Stone told Matt Zoller Seitz, the author of a book about to be released on Stone, about Ron’s confession.

The book, “The Oliver Stone Experience,” included the meeting between Stone and the former security agent.

“The scenario he laid out was very practical,” Seitz said, adding that if he were to do anything like that, he would do it the way Ron described it to Stone. “You kill the president, and your cover is security, and if the sniper or snipers who kill the president are hidden in with the guys who are supposed to protect him, guys who have no knowledge of this plot … It makes a lot of sense.”

When asked why Stone waited until now to reveal this information, Seitz said, “I think it was because he trusted me, and also because both the father and the son have been dead for a while.”
Posted by arclein at 12:00 AM