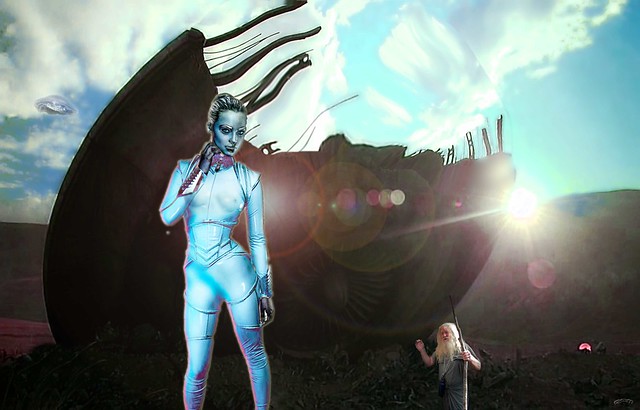 This story is quickly becoming more public. However i want to emphasize one thing.  All this depends on exactly one scientific discovery and that is gravity manipulation.  That was apparently understood in the mid fifties and was immediately kept secret.  My associate's efforts have since confirmed the reality of gravity manipulation as well.  I am not just relying on whistle blowers on their death bed.

My present conjectural framework suggests that our third tier matter merely provides a 'wave guide' for second tier matter which carries gravity as we know it.  I also suspect that this second tier matter can be excluded using resonance and the ultraviolet.  This is meant to be a hint for table top experiments.


This article is now firming up timelines and actual scope of operations including a very ambitious Mars program.  I suspect we may be excluded from the moon.

We have 300 astronauts in 1985.  We have Mars colonies or actually bases in 1995.  This demands a major expansion.  Thus we have Spacecraft fabrication beginning under the research umbrella of the space Race in the early sixties.  Presume capability by late seventies.  Understand NASA research advances since then along with Moore's law and all this works so long as we manipulate gravity and nothing else.  Actual magnetic field propulsion demands material revolutions now happening but not possible twenty years ago.  Thus our observed craft are still using jet engines in atmosphere at least. It also explains why we have such large craft.  A gravity vessel can pack a million pounds of fuel if it had to.

All this remains Top Secret for the nonce.  However it is becoming not much of a secret.

According to a hacker who is facing a ten-year legal battle after breaking into NASA computers, the United States has a fully operational fleet of Space Warships. Gary McKinnon, firmly believes that he came across the ultimate information that proves the US have a secret space program operated by the navy with fully operational warships that operate in Space.

In a new interview on UFO channel Richplanet TV, McKinnon finally reveals the entire truth about his findings saying: ‘I kept going for months and months. I kept thinking, ‘They’re going to close this door’.

McKinnon said that he used a software called Landsearch which allowed him to search all files and folders of interest to him.

‘I scanned and looked for documents, I found an Excel spreadsheet which said, ‘Non-terrestrial officers’, states McKinnon.

‘It had ranks and names. It had tabs for ‘material transfer’ between ships.

‘I took that to be, they must have a ships based in space – the names started with U.S.S.’

Gary McKinnon is accused of mounting the biggest ever hack in the history of the United States by breaking into the computers of the Army, Air force, Navy and NASA.

During his latest interview, McKinnon describes a conversation from a former NASA whistleblower Donna Hare, who had been told by a colleague that NASA was trying to hide delicate information by “airbrushing” UFOs from their photos.

“There was a colleague, who was in another room — they all had secret clearance but they were on different projects — and she (Hare) was in this chap’s lab or room or whatever it is and he said come and take a look at this,” said McKinnon.

While there are many people who firmly believe this is yet another elaborate hoax, there have been a series of former NASA and government employees who back up the claims made by McKinnon.

According to statements from a former Marine not only have humans made it to Mars in the past, but we have developed a secret space program and flotilla that operates in space. The former US Marine, was posted on the red planet for years and his mission was to protect the five human colonies from indigenous life forms on Mars. According to the former Marine known as Captain Kaye, not only did he spend years on Mars, but he also served aboard a giant space carrier for three years.

He worked for the Mars Defense Force (MDF) which is owned and operated by the Mars Colony Corporation (MCC) which is basically a conglomerate of financial institutions, government and tech companies. Kaye and his team were part of a special section of the United States Marines with a highly classified mission, protect and ensure the existence of five newly-established colonies on the surface of the red planet. The Earth Defense Force, another secret military branch has military recruits from countries such as the United States, China and Russia.

Parts of the testimony from Captain Kaye are consistent with that of Michael Relfe, another whistleblower who claims to have served 20 years tour on the red planet. Laura Magdalene Eisenhower, great-granddaughter of former President Eisenhower claims that efforts were made to recruit here onto a human colony on Mars, led by researcher Dr. Hal Puthoff.

According to “Jackie”, there are humans on Mars, and we have been on the red planet for over 20 years. ‘Jackie’, she and six other employees saw the exact same thing, suggesting this might be the evidence that proves that a secret space program did exist (or might even still).

According to ‘Jackie’ while working as part of the team downloading telemetry from the Viking Lander, she saw human setting foot on the surface of the red planet via a live feed from Mars.

In an interview with Coast-to-Coast AM, Jackie talked about humans on Mars, something that has been discussed among other alleged NASA employees for years.

Many Ufologists firmly believe that the statements made by the above individuals are accurate and that this information is being withheld from the general public.

From Ancient Code @ http://www.ancient-code.com/nasa-hacker-i-found-evidence-america-has-deep-space-warships/
New Book Reveals What You Need to Know about the Secret Space Programs 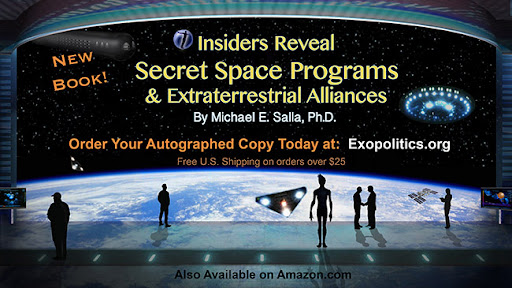 President Ronald Reagan made a startling admission in his Presidential Diary on June 11, 1985:

Lunch with 5 top space scientists. It was fascinating. Space truly is the last frontier and some of the developments there in astronomy etc. are like science fiction, except they are real. I learned that our shuttle capacity is such that we could orbit 300 people.

NASA’s Space Shuttle program at the time held a maximum of eleven people per shuttle, and only five were built for space flight. Even if all five took off together, it would be impossible to place and maintain 300 astronauts in orbit.

Finding the truth behind Reagan’s extraordinary revelation requires diving deep into the shadowy world of highly classified aerospace programs. The problem in doing so is not only that public documentation is at best scant, if available at all, but that possession of documentary evidence of such programs can be illegal. There are severe penalties for possessing and/or disclosing classified documents to anyone unauthorized to view them. It takes a brave whistleblower to come forward to disclose what he or she knows about classified aerospace programs.

A new book, Insiders Reveal Secret Space Programs & Extraterrestrial Alliances, introduces a number of whistleblowers who have made extraordinary claims regarding secret space programs that they either directly served in and/or were briefed about. In particular, the book investigates the extraordinary claims of Corey Goode concerning five secret space programs that he was directly involved with and/or been briefed about.

Goode says he completed a 20 year tour of duty from 1987 to 2007 in several of these programs. He reveals that in the course of his duty, he came into direct contact with different extraterrestrial groups and alliances that interacted with one or more of the space programs. Goode’s position allowed him unrestricted access to “Smart Glass Pads” that had extensive information about highly classified history, science, medicine and other topics related to secret space programs and extraterrestrial life.

Goode further claims that in early 2015, he was made the delegate of an alliance of newly arrived extraterrestrial visitors. This included a group called the “Blue Avians,” who facilitated meetings that he attended between the different secret space programs and/or different extraterrestrial alliances. He says that these new visitors have superior technologies in comparison to anything previously witnessed, and have implemented a solar system wide quarantine, which directly impacts all the space programs and other extraterrestrial groups, in tandem with the entire citizenry of Earth.

Available public documents along with other whistleblower testimonies help corroborate many of Goode’s claims, and provide an overall context for understanding the full scope of the multiple secret space programs. His testimony provides clear answers as to what Reagan was briefed about in 1985, and why the latter’s repeated offers of global cooperation to face an alien threat led to the sharing of classified space technologies that ended the Cold War. 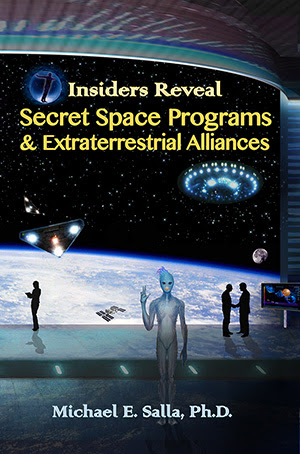 Classified space programs have been an integral part of a complex jigsaw puzzle concerning UFOs, extraterrestrial life, ancient civilizations and advanced aerospace technologies, which have long defied any coherent understanding. Now finally, we have something to put all the pieces together with the disclosures of secret space program whistleblower, Corey Goode. A detailed investigation of Goode’s and other insider testimonies reveals the big picture of a parallel world of secret space programs and extraterrestrial alliances.

Learn from this book: how the Vril/Nazi flying saucer programs in the 1930’s gave birth to the ‘Dark Fleet’; how Project Paperclip scientists both helped and hindered the development of the US Navy’s ‘Solar Warden’; how the MJ-12 Group was behind the creation of the ‘Interplanetary Corporate Conglomerate’; and how Ronald Reagan was instrumental in the creation of the ‘Global Galactic League of Nations’ space program. Finally, learn how the Sphere Being Alliance and other extraterrestrials interact with these and other programs. The full disclosure of secret space programs and extraterrestrial alliances will unshackle the chains of deception holding humanity back from reaching its highest potential as galactic citizens.

About the Author: Dr Michael Salla is a former university professor in international relations, and is the author of Kennedy’s Last Stand: Eisenhower, UFOs, MJ-12 & JFK”s Assassination (2013), which has received many “outstanding” reader reviews; and author/editor of eight other books dealing with ‘Exopolitics’, International Conflict, U.S. Foreign Policy and Global Peace.
Posted by arclein at 12:00 AM