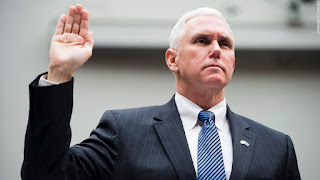 What Trump clearly represents is a president who understands corruption and will have none of it when he is in the white house.  You can also be sure that he will derail the lobbying machine and senate and congressional corruption.


He is also sophisticated enough to understand the deals behind the scene literally as they walk in the door..  Do you wonder that the elites are seriously terrified?  It would be like me been in position to charge all those folks who wreacked the AAA bond system with treason as i posted in 2008.  The reality is that treason is now business as usual in Washington and Clinton is very part of that scene.


Pence is completely correct.  She is amazingly running a campaign in a pure bubble and will avoid questions.  The only mystery now is to see how she dodges the debates.  Can her artful dodging allow her to make it to the White House? She did side step Bernie's victorious campaign..  .


Mike Pence Just Send HUGE MESSAGE To Hillary – Nobody DARED To Say This!


Mike Pence, Donald Trump’s vice president choice and Indiana Governor, spoke for Breitbart News about Hillary Clinton and called out the DNC nominee, Hillary Clinton on her email scandals, poor health condition and her lying about it as well as other scandals related to her Foundation. What Pence said is that she needs to “come clean” with Americans and “shut down the Clinton Foundation.”


After attending an event in Iowa, pence gave a phone statement and said the following:


It’s time for Hillary Clinton to come clean and level with the American people about the State Department and foreign donors to the Clinton Foundation. This is, learning today, with the revelation today of 725 pages of new State Department documents that she was—it was confirmed that her top aide gave expedited direct access to top Clinton Foundation donors along with the news that the FBI found 15,000 more emails that Hillary Clinton didn’t turn over. I mean, Hillary Clinton has to come out of hiding and start answering questions the American people deserve answers to. It’s really quite a contrast—Clinton has been hiding, and Trump is everywhere.


Pence’s comments come on the heels of revelations from emails of Huma Abedin, a top Hillary Clinton aide, that show her working with the Clinton Foundation’s Doug Band to set up a meeting between Clinton and a top Clinton Foundation donor. They also come as the public learns the FBI found an additional previously undisclosed 15,000 emails that Hillary Clinton hid from the public and from the government, along with the comments from fellow former Secretary of State Colin Powell—who served during the George W. Bush administration—disavowing Clinton’s attempt to blame him for the email server setup.


“Colin Powell is a man of unimpeachable integrity and Hillary Clinton’s efforts to blame Colin Powell for her decision to have a private server and use a private email account, it’s very offensive to those of us who hold him in high regard and respect his enormous contributions to this nation,” Pence said in response to the revelations Powell made in an interview with People Magazine, burning Clinton’s latest excuse—one she reportedly used in her interview with the FBI.


Pence, GOP presidential nominee and billionaire businessman Donald Trump’s running mate, called on Hillary Clinton to actually do a press conference instead of a pre-choreographed media interview so she can answer these questions. As of Monday, it has now been 261 days since Hillary Clinton’s last press conference. Pence also said the Clinton team’s promise to not take foreign and corporate donations into the Clinton Foundation should she win the election doesn’t wash with voters because she did do so when she was Secretary of State.


I think Hillary Clinton has to stand before the media and the American people and answer questions about the relationship between foreign and corporate donors to the Clinton Foundation and her actions as Secretary of State. It is breathtaking that the Clintons have now announced she will no longer accept corporate and foreign donations if she is elected President of the United States. That’s too little too late. It is remarkable that they now acknowledge that if she becomes president that contributions from corporate and foreign donors to the Clinton Foundation would represent a conflict of interest, when apparently they think that didn’t represent a conflict of interest when she was Secretary of State.


That’s why, Pence said, when he was in Iowa earlier on Monday—and in his interview with Breitbart News—he reiterated his and Trump’s call for Hillary Clinton to dismantle the Clinton Foundation immediately. He said the ability for corporate and foreign donors to the Clinton Foundation to donate between now and the election means they can “make down payments on” favors to be paid later by a potential Clinton White House. He went on:


I have to tell you, I think that just defies logic and frankly today in Iowa I reiterated Donald Trump’s call that Hillary Clinton should shut down the Clinton Foundation immediately. The very idea that they will continue to accept donations by corporations and foreign donors between now and election day is totally unacceptable. That would give foreign donors and corporations the opportunity to make down payments on access to the Clinton administration before she’s elected. Look, the American people have a right to know—they have a right to know what happened while she was Secretary of State and what access and what actions were afforded to corporations and foreign donors to the Clinton Foundation. But the important thing, as Donald Trump and I have both said to date, Hillary Clinton should shut down the Clinton Foundation immediately and cease and desist any further fundraising activities during the balance of this campaign and going forward.


All of this, Pence noted, is happening on the backdrop of previous revelations that career law enforcement professionals at the FBI were seeking to launch a public corruption investigation into the Clinton Foundation and Hillary Clinton’s actions at the State Department—something politically motivated officials at President Barack Obama’s and Attorney General Loretta Lynch’s Department of Justice shut down. Pence noted that if Americans want to end the corruption, and bring it to a “screeching halt,” the choice on election day is simple: Vote for Donald Trump. A vote for Trump, he said, is a vote to end all of this because he has no “special interest” in his ear except for the American people.


“That was shut down by officials at the Obama Justice Department. This all simply smacks of the kind of pay-to-play politics that the American people are tired of, and as I said again today in Iowa, this is exactly the kind of pay-to-play politics that is going to come to a screeching halt the day that Donald Trump becomes president of the United States of America. It is accurate to say that when Donald Trump becomes president, the days of this rigged system for a favored few will come to an end, because Donald Trump’s only special interest will be the American people.”
Posted by arclein at 12:00 AM