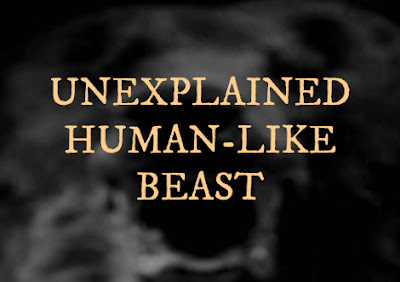 A short note here, but the witness got a really good look see.  It is seriously interesting.  The snout like a bear eliminates Bigfoot right away.  The teeth makes it into prospective Giant Sloth.  Describing the ears, head hair and head shape as human is unexpected but reasonable.  Yet no tail is observed either.

The large feet and hands can be understood in terms of the huge claws that support tree climbing.  We get a real good sense of successful bipedal motion.

As usual we are seeing the male and i do suspect that the female is much smaller and sports a tail as well.  what becomes clearer though is that bipedalism is the preferred method for getting around and this animal is highly adept. .

I have been reading about sightings of man-like creatures all over the internet. Back in January 2014 I was driving home from my workplace and witnessed an unexplained 'thing' cross the roadway in front of me.
I was at my workplace, the Toyota plant in Buffalo, WV. I was on vacation, but needed to stop by and pick up my paycheck. It was close to 5PM. I was driving home on Rt 35 and then turned of onto to Hurricane Creek Rd heading towards home. It was dark by that time. There is a wide turn about 1/4 mile from the highway. As I drove through the turn, something on two legs walked out of the woods and onto the roadway.
I hit the high beams, and when I did this 'thing' turned it's head and bore it's teeth, running into the opposite trees on two legs. I have no idea what this thing was, but the teeth were huge. It was about 6-7 ft high. It had a snout like a bear but the head looked like a man - eyes, ears and hair. The body had black hair all over it, but it was built like a stocky man - long legs with big flat feet and arms with man hands. It shocked the hell out of me.
When I got home I told my wife, but didn't tell my daughter. I didn't want to scare her. I've been hunting in this county all my life but have never seen or heard of anything like this.
I thought I'd write you after seeing the upright canine reports but I don't think that is what this is. I could only call it a 'bear man.' I'd like to know what you thought. JH