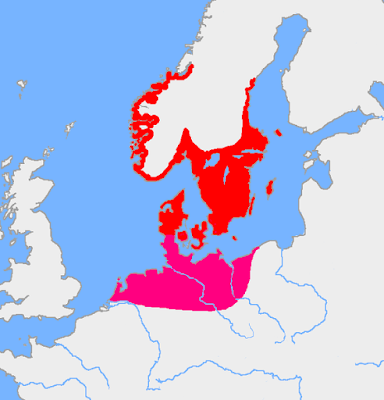 This is worth commenting on.  What needs to be understood is that pre Roman and Roman times saw scant agricultural development in the forests of Europe.  That had to wait until the advent of the steel axe and the deep steel plow in the Late Middle ages.  That led to the first industrial revolution along the Rhineland and saw the German colonization of lands to the East.

To put this in perspective, my father's ancestors founded a village in the Carpathians around 1250 AD and named it Neuhau ( literally 'new clearing').  That at least shows us the end of the phenomena that began several centuries earlier.


What this really means is that German population was low up to the end of the Western Roman Empire when starving Germans fled their forests.  Yet coastal peoples were always sustained by their fishery.  These populations although constrained to the coast were robust and supported a dominant village sea culture.  Think of the Pacific northwest with their tens of thousands and the interior indians with their hunting bands around 1800 AD.

Thus this stock naturally dominated back through the Bronze Age beginning around 2500 BC through the end of the Viking Age  at 1000 AD.  It is thus quite reasonable that the dominant genetic stock for Europeans be Scandinavian.  The culture itself shifted around 1000 AD through conversion to Christianity and this helped establish local Rulers that were then land based as well.  This led to obscuring the Scandinavian component culturally..

What are some things from history that people have got completely wrong?

The ancestors of many of today's Britons, Americans, Canadians, Australians, New Zealanders are Scandinavians.
The main population of modern Britain are Anglo-Saxons.

During the Pre-Roman Iron Age (from the 4th to the 1st century BC), the climate in Denmark and southern Scandinavia became cooler and wetter, limiting agriculture and setting the stage for local groups to migrate southward into Germania. History of Denmark
Archaeological and linguistic evidence from a period known as the Nordic Bronze Age indicates that a common material culture existed between the Germanic tribes that inherited the southern regions of Scandinavia, along with the Schleswig-Holstein area and the area of what is now Hamburg, Germany. Germanic peoples


In the wake of the breakdown of Roman rule in Britain from the middle of the fourth century, present day England was progressively settled by Germanic groups. Collectively known as the "Anglo-Saxons", these were Angles and Saxons from what is now the Danish/German border area and Jutes from the Jutland peninsula. History of England

The Anglo-Saxons also emigrated to North America, Australia, New Zealand. Anglo-Saxon (nation, culture, mentality and so on), it is Scandinavian - perhaps Swedish.