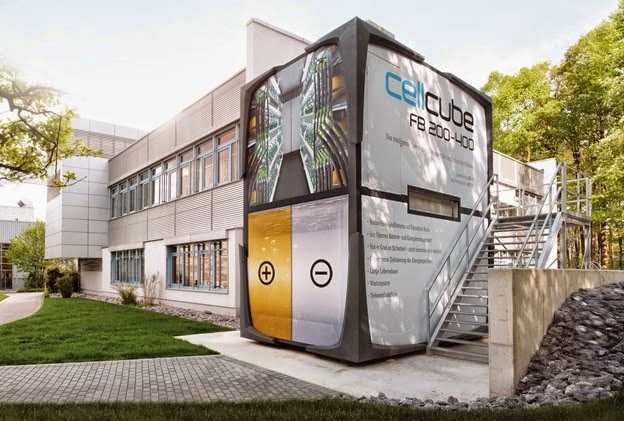 We have posted a lot on the vanadium redox battery protocol and it is been pursued although little has been said regarding patent issues. What we do know is that this is a choice for industrial energy storage that surely works.

Thus this is merely a refresher on the topic presently back in development labs in several places including China and Australia and now the USA.
Of course pending dirt cheat energy described here will end all possible markets soon enough.

Vanadium "redox flow" batteries are very stable. They can be discharged and recharged 20,000 times without much loss of performance, and are thought to last decades (they have not been around long enough for this to have been demonstrated in practice).


They can also be enormous, and - in large part thanks to their vanadium content - expensive. The smallest of the "Cellcube" batteries that American Vanadium is producing in partnership with German engineering firm Gildemeister has a footprint the size of a parking bay and costs $100,000.


How does a Vanadium Redox Flow Battery work?


They consist of two giant tanks of different solutions of vanadium dissolved in sulphuric acid, separated by a membrane

In one tank, the vanadium releases electrons, turning from yellow to blue

In the other tank, the vanadium receives electrons, turning from green to violet

The electrons pass around a circuit, generating a current, while at the same time a matching number of protons (hydrogen ions) pass across the membrane between the two solutions

The challenge of balancing electricity supply and demand is set to get a whole lot more difficult as ever more solar and wind energy is added to the grid.


why should vanadium batteries be the technology of choice?


For example, there is a glut of cheap lithium batteries these days, after manufacturers built out their capacity heavily in anticipation of a hybrid and electric cars boom that has yet to arrive.


Lithium batteries can deliver a lot of power very quickly, which is great if you need to balance sudden unexpected fluctuations - as may be caused by passing clouds for solar, or a passing gale for wind.


But a lithium battery cannot be recharged even a tenth as many times as a vanadium battery - it's likely to die after 1,000 or 2,000 recharges.


Nor can lithium batteries scale up to the size needed to store an entire community's energy for several hours. By contrast, vanadium batteries can be made to store more energy simply by adding bigger tanks of electrolyte. They can then release it at a sedate pace, unlike conventional batteries, where greater storage generally means greater power.


At the other end of the scale, there are also plenty of large-scale energy storage systems under development, such as those exploiting liquefied air, and the 1,000-fold shrinkage in the volume of the air when it is cooled to -200C.


But these systems take up a lot of space, Mr Voigt says, and are better suited to the very largest-scale facilities that will be needed to serve for instance a large offshore wind farm plugging into the high-voltage national grid.


The second really big question for vanadium is whether the world contains enough of the stuff.


The immediate challenge is that the birth of the vanadium battery business is coming just as China is ramping up its demand for vanadium steel.


But there is also a longer-term problem - the quantities of vanadium added to steel alloys are so tiny that it is not economic to recover it from the steel at the end of its life. So for the battery market, that vanadium is effectively lost forever.


"Like with all raw materials, it's always a question of how stable is the need of the market, and how big are the incentives for the industry to set up new mines."


With demand on an upward trend, American Vanadium is not the only one trying to fill the gap. For example, rival battery-maker Imergy has developed a cheap ways of producing vanadium electrolyte from iron ore slag and the fine ash produced by coal-burning.


Over the longer term, demand for vanadium steel could be met by melting down and recasting old vanadium steel rather than making it afresh, so that freshly mined vanadium could be channelled into the energy market instead.


And in the very long run, perhaps we will harvest vanadium from sea squirts - there are plenty of them in the Pacific.

* Closely related to vertebrates, in their larval stage sea squirts look like tadpoles and swim around
* But once they find an appropriate rock to attach to, they metamorphose into something resembling a brightly-coloured vegetable
* They never leave their spot, and feed by filtering tasty morsels from the sea water they pump through their bodies


* Having committed themselves to this life of tedium, they also digest their redundant brains
* Some fungi also accumulate vanadium, including the bright red and white poisonous, hallucinogenic mushroom known as the fly agaric
Posted by arclein at 12:00 AM