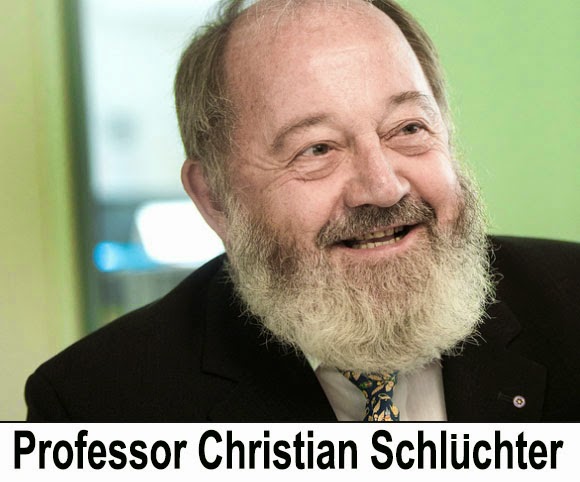 The sudden event of 8200 years ago is likely another volcanic event or possibly caused by the emptying of Lake Agassiz. I really do not like to blame any variation on the Sun. Our sun is variable but of a low amplitude and otherwise super stable. It is a long shot explanation that has to be matched by equal events elsewhere outside the Northern Hemisphere.

Volcanoes care wonderfully successful at wreaking the climate for a long while. Better yet we do need to pin down exactly the major disturbances post Pleistocene Nonconformity. They do show up in Indian scriptures.
In the meantime, this reminds us of just how warm the Bronze Age climate really was. Rome got the echo.
As I have posted from the beginning in 2007 linking CO2 to climate is a serious blunder not slightly supported by geology and meaningful time lines.


Sensational discovery of 4000-year old chunks of wood at the edge of glaciers in Switzerland proves climate was warmer in the past than previously thought. Distinguished geologist, Professor Christian Schlüchter, condemns politically corrupt 'man-made global warming' scientists for covering up the game-changing find.

This post is about an interview by the online Swiss Der Bund here with Swiss geology giant Christian Schlüchter titled: “Our society is fundamentally dishonest“. In it he criticizes climate science for its extreme tunnel vision and political contamination.

Geologist Sebastain Lüning sent me an e-mail where he writes: “This is probably the best interview from a geologist on climate change that I have read for a long while. My highest respect for Prof. Schlüchter.” Fritz Vahrenholt calls it “impressive”.


His discovery of 4000-year old chunks of wood at the edge of glaciers in Switzerland in the 1990s unintentionally thrust the distinguished geologist into the lion’s den of climate science. Today the retired professor and author of more than 250 papers speaks up in an interview.


Early in the interview Schlüchter reminds us that during Roman times in the Alps “the forest line was much higher than it is today; there were hardly any glaciers. Nowhere in the detailed travel accounts from Roman times are glaciers mentioned.” He criticizes today’s climate scientists for focusing on a time period that is “indeed much too short“.


In the interview, Schlüchter recounts how he in the 1990s found a large chunk of wood near the leading edge of a glacier. The chunk of wood, he describes, looked as if it had been dragged across a cheese shredder. It was clear to Schlüchter that the specimen had to be very old. Indeed laboratory analysis revealed that it was 4000 years old. Next they found multiple wood fragments with the same age, all serving to fill in a major piece of the paleo-puzzle. His conclusion: Today where one finds the Lower Aare-Glacier in the Bernese Alps, it used to be “a wide landscape with a wildly flowing river“. It was warmer back then.


Until the 1990s, scientists thought that the Alps glaciers had been more or less consistently intact and only began retreating after the end of the Little Ice Age. Schlüchter’s findings showed that glacial retreats of the past also had been profound.


This threw climate science into chaos and it remains unreconciled today.


But not all scientists were thrilled or fascinated by Schlüchter’s impressive discoveries. He quickly found himself the target of scorn. Swiss climate scientist Heinz Wanner was reluctant to concede Schlüchter’s findings. Schlüchter tells Der Bund:


I wasn’t supposed to find that chunk of wood because I didn’t belong to the close-knit circle of Holocene and climate researchers. My findings thus caught many experts off guard: Now an ‘amateur’ had found something that the Holocene and climate experts should have found.”


Schlüchter tells of other works, which also have proven to be a thorn to mainstream climate science, involving the Rhone glacier. His studies and analyses of oxygen isotopes unequivocally reveal that indeed “the rock surface had been ice-free 5800 of the last 10,000 years“.


What’s more worrisome, Schlüchter’s findings show that cold periods can strike very rapidly. Near the edge of Mont Miné Glacier his team found huge tree trunks and discovered that they all had died in just a single year. The scientists were stunned.


The year of death could be determined to be exactly 8195 years before present. The oxygen isotopes in the Greenland ice show there was a marked cooling around 8200.”


That finding, Schlüchter states, confirmed that the sun is the main driver in climate change.

Today’s “rapid” changes are nothing new

In the interview he casts doubt on the UN projection that the Alps will be almost glacier-free by 2100, reminding us that “the system is extremely dynamic and doesn’t function linearly” and that “extreme, sudden changes have clearly been seen in the past“. History’s record is unequivocal on this.


Why did the glaciers retreat in the middle of the 19th century, although the large CO2 increase in the atmosphere came later? Why did the earth ‘tip’ in such a short time into a warming phase? Why did glaciers again advance in 1880s, 1920s and 1980s? [...] Sooner or later climate science will have to answer the question why the retreat of the glacier at the end of the Little Ice Age around 1850 was so rapid.”


On science: “Our society is fundamentally dishonest”


CO2 fails to answer many open questions. Already we get the sense that hockey stick climate claims are turning out to be rather sorrowful and unimaginative wives’ tales. He summarizes on the refusal to acknowledge the reality of our past: “Our society in fundamentally dishonest“.

In the Der Bund interview Schlüchter describes a meeting in England that turned him off completely. The meeting, to which he was “accidentally” invited, was led by “someone of the East Anglia Climate Center who had come under fire in the wake of the ‘Climategate’ e-mails“:


The leader of the meeting spoke like some kind of Father. He was seated at a table in front of the those gathered and he took messages. He commented on them either benevolently or dismissively. Lastly it was about tips on research funding proposals and where to submit them best. For me it was impressive to see how the leader of the meeting collected and selected information. For me it also gets down to the credibility of science. [...] Today many natural scientists are helping hands of politicians, and no longer scientists who occupy themselves with new knowledge and data. And that worries me.”


Schlüchter adds that the reputation of science among young researchers is becoming more damaged the more it surrenders to politics. He indirectly blasts IPCC chief scientist Thomas Stocker:


Inventing the devil was one of man’s greatest inventions ever achieved. You can make a lot of money when you paint him on the wall.”


Schlüchter also says that the northern hemisphere is still in the ice age mode and that the glaciers during the Roman times were at least 300 to 500 meters higher than today. “The mean temperature was one and half degree Celsius above that of 2005. The current development is nothing new in terms of the earth’s history.”

“Good to hear from Christian Schlüchter (once he was my student – and a brilliant one). My thesis work from 1972 gave lots of proof for mountain forests in the Grimsel (Unteraar- and Oberaar-Glacier) with a rich forest flora.”

see also my piece of fossil wood (discovered 1972) with comment

Christian Schlüchter is Professor emeritus for Quaternary Geology and Paleoclimatology at the University of Bern in Switzerland. He has authored/co-authored over 250 papers.