Worm that can put Itself into Ageless State' 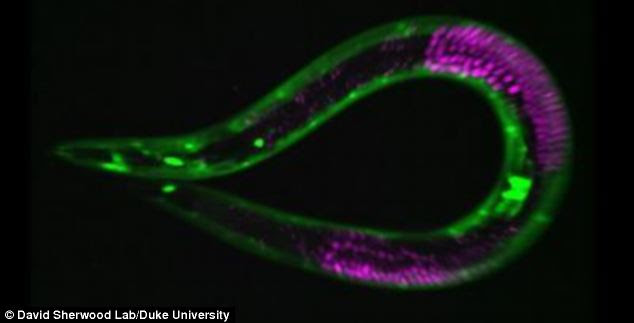 This is intriguing. It suggests that dormancy can be turned on and off and this naturally extends one's lifespan. I suspect that it strongly supports systemic fasting although I am unsure if the arclein diet would accomplish any of this.

Certainly we have plenty of anecdotal support for fasting in later life supporting aging.
I am not particularly sure that a drug protocol can be derived or even if we can figure out the best fasting protocol either. Otherwise, the fasting protocol I use works wonderfully in regulating my intake and promoting good health.

The key to eternal youth? Researchers reveal worm that can put itself into 'ageless state' - and hope to create a drug to do the same for humans

The centuries-long search for the fountain of youth has led researchers to an unlikely source - a tiny worm.

The nematode worm C. elegans can put itself into 'famine mode' researchers have discovered- a state where it does not age.

They say a new study of the phenomenon could one day lead to a drug for humans.

A new study of the tiny nematode worm C. elegans begins to explain this marvel of calorie restriction and hints at an easier way to achieve longevity. This image shows a nematode worm C. elegans with muscle cells fluorescently labeled in green and germ cells fluorescently labeled in red. These cells and others pause at a checkpoint in development and slow their aging when worms encounter a period of starvation.

HOW THEY DID IT

Researchers found that hatching C. elegans eggs in a nutrient-free environment shut down their development completely.  They decided to investigate whether restricting diet to the point of starvation later in life would have the same effect.

They focused on the last two stages of C. elegans larval development -- known as L3 and L4 -- when critical tissues and organs like the vulva are still developing.

During these stages, the worm vulva develops from a speck of three cells to a slightly larger ball of 22 cells.

The researchers found that when they took away food at various times throughout L3 and L4, development paused when the vulva was either at the three-cell stage or the 22-cell stage, but not in between.

'It is possible that low-nutrient diets set off the same pathways in us to put our cells in a quiescent state,' said David R. Sherwood, an associate professor of biology at Duke University who led the research.

'The trick is to find a way to pharmacologically manipulate this process so that we can get the anti-aging benefits without the pain of diet restriction.'

Researchers found that taking food away from C. elegans triggers a state of arrested development: while the organism continues to wriggle about, foraging for food, its cells and organs are suspended in an ageless, quiescent state.

When food becomes plentiful again, the worm develops as planned, but can live twice as long as normal.

The study, published in PLOS Genetics, found that C. elegans could be starved for at least two weeks and still develop normally once feeding resumed.

Because the meter isn't running while the worm is in its arrested state, this starvation essentially doubles the two-week lifespan of the worm.

The study found that C. elegans could be starved for at least two weeks and still develop normally once feeding resumed.

'This study has implications not only for aging, but also for cancer,' said Sherwood.

'One of the biggest mysteries in cancer is how cancer cells metastasize early and then lie dormant for years before reawakening.

'My guess is that the pathways in worms that are arresting these cells and waking them up again are going to be the same pathways that are in human cancer metastases.'

The researchers are now performing a number of genetic studies to see if they can find another way to force C. elegans into these development holding patterns.

So the worm stops aging while in this state of suspended animation? Nice and obviously handy. But does it (or can it) reverse the aging process that has already taken place during this time? Or is it just a Rip Van Winkle of Worms who can sleep for decades or more and while not getting any older as the rest of the world does, it is not getting any younger, either. It is just taking a break on its’ life and seemingly little more.