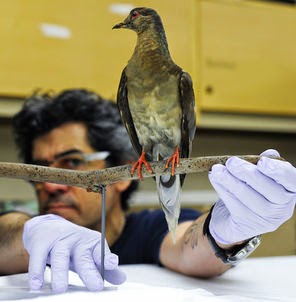 De extinction has become a plausible possibility and we have thousands of different species sitting in specimen storage around the world. Needless to say someone woke up to the symbolic significance of bringing back the passenger pigeon.

They are going to have to solve the problem that likely killed off the pigeon. They roosted in huge vulnerable rookeries in the south and this surely made them prime targets for the rat who would go after the eggs and young.


However, against that day we can rebuild a breeding stock at least.


A century ago, Martha, a red-eyed, gray and brown bird famous as the last surviving passenger pigeon, keeled over, marking an extinction that shook science and the public.


WASHINGTON —
It was the moment that humanity learned we had the awesome power to erase an entire species off the face of the Earth in the scientific equivalent of a blink of an eye: The passenger pigeon went from billions of birds to extinct before our very eyes.


It was one bird’s death after many. But a century ago, Martha, a red-eyed, gray and brown bird famous as the last surviving passenger pigeon, keeled over, marking an extinction that shook science and the public.


A century later, Martha’s back, in a way. She is being taken out of the file cabinets of history in a new Smithsonian Institution exhibit this month that reminds the public of her death and of other species that have gone extinct because of humans. A new study published this week shows how pigeon populations fluctuated wildly, but how people ultimately killed off the species.


Some geneticists are working on the longshot hope of reviving the passenger pigeon from leftover DNA in stuffed birds.


“Here was a bird like the robin that everybody knew and within a generation or two, it was gone — and we were its cause,” Duke University ecologist Stuart Pimm said.


In the 18th and 19th centuries, the passenger pigeon was the most abundant bird species on Earth. In 1866 in Ontario, one flock of billions of birds, 300 miles long and one mile wide, darkened the skies for 14 hours as it flew by overhead. Unlike the domesticated carrier pigeon used for messages, these were wild birds.


And famed naturalist John James Audubon once described a mile-wide migratory flock that darkened the Kentucky skies for days in 1813 — and brought the Louisville population to the banks of the Ohio River with guns.


The birds were easy to catch because they stayed together. They were considered a poor man’s food; domestic workers complained about eating too much passenger pigeon.


“Nobody ever dreamed that a bird that common could be brought into extinction that quickly,” said University of Minnesota evolutionary biologist Bob Zink.


Examination of the passenger pigeon’s genetic code shows that its population ping-ponged regularly from up to 5 billion to as few as tens of millions, said a study co-authored by Zink in the journal Proceedings of the National Academy of Sciences released Monday.


The passenger-pigeon population probably swelled, crashed and recovered cyclically over the past million years, based on climate, food and other factors, the study said. By the late 1800s, the bird population may have been in a down cycle that was exacerbated by overhunting and land clearing.


Indeed, the chief causes of the extinction — cutting down Eastern U.S. forests and hunting — were man-made, Zink said. “Passenger pigeons always reached lows like this, it’s just this time their luck ran out because we were around,” Zink said.


By 1900, there we no passenger pigeons left in the wild. By 1914, there was just 29-year-old Martha — named for Martha Washington — at the Cincinnati Zoo & Botanical Garden. People lined up to see her. She was a star.


On Sept. 1, 1914, Martha was found lying on the bottom of her cage. The passenger pigeon was officially extinct. It had gone from billions of birds to zero in about one century, probably less.


It was the first public extinction, something people used to think happened only to relics of the past such as dinosaurs, or critters stuck on islands such as dodos, Pimm and other scientists said.


“This was a real wake-up call for the public and frankly for scientists, too,” said Helen James, curator of birds at the Smithsonian’s Natural Museum of History. “Ornithologists studied birds and they didn’t really think of species becoming extinct.”


But they did. And Martha was put in a 300-pound block of ice and shipped to Washington, D.C., and the Smithsonian. She was stuffed and mounted, and continued as a star. When she traveled back to Cincinnati or to San Diego for a big conservation conference, she flew in a first-class seat.


But her star faded. For the past 15 years, she has been in a drab metal filing cabinet in the bowels of the Smithsonian, stuck on the same stick with an older stuffed unrelated pigeon named George. They were separated Monday. George was put back in storage and a prettied-up Martha was ready for a comeback. An exhibit on her extinction and the 100th anniversary opens June 24 at the Smithsonian.


DNA resurrection
If scientists can figure it out, there may be a bigger comeback in the offing. The passenger pigeon is the prime candidate for something new: de-extinction.


Some top geneticists in a nonprofit are looking to see if they can create living versions of the passenger pigeon, by editing the DNA of the closely related band-tailed pigeons, growing those birds from embryo and breeding them. It would cost millions and take at least a decade, said Ben Novak, lead researcher of the group, Revive & Restore of San Francisco.


Pimm and Zink don’t like the idea, ethically or practically.


Novak sees a world on the verge of a mass extinction of many species and feels something has to be done about it. Reviving some long-lost species may offer “a type of justice for what we’re doing now” and also teach people, “It’s so much easier to keep something alive than to bring it back to life.”


Material from Los Angeles Times is included in this report.