Inside Account Of An Elite Nazi Combat Unit's Collapse 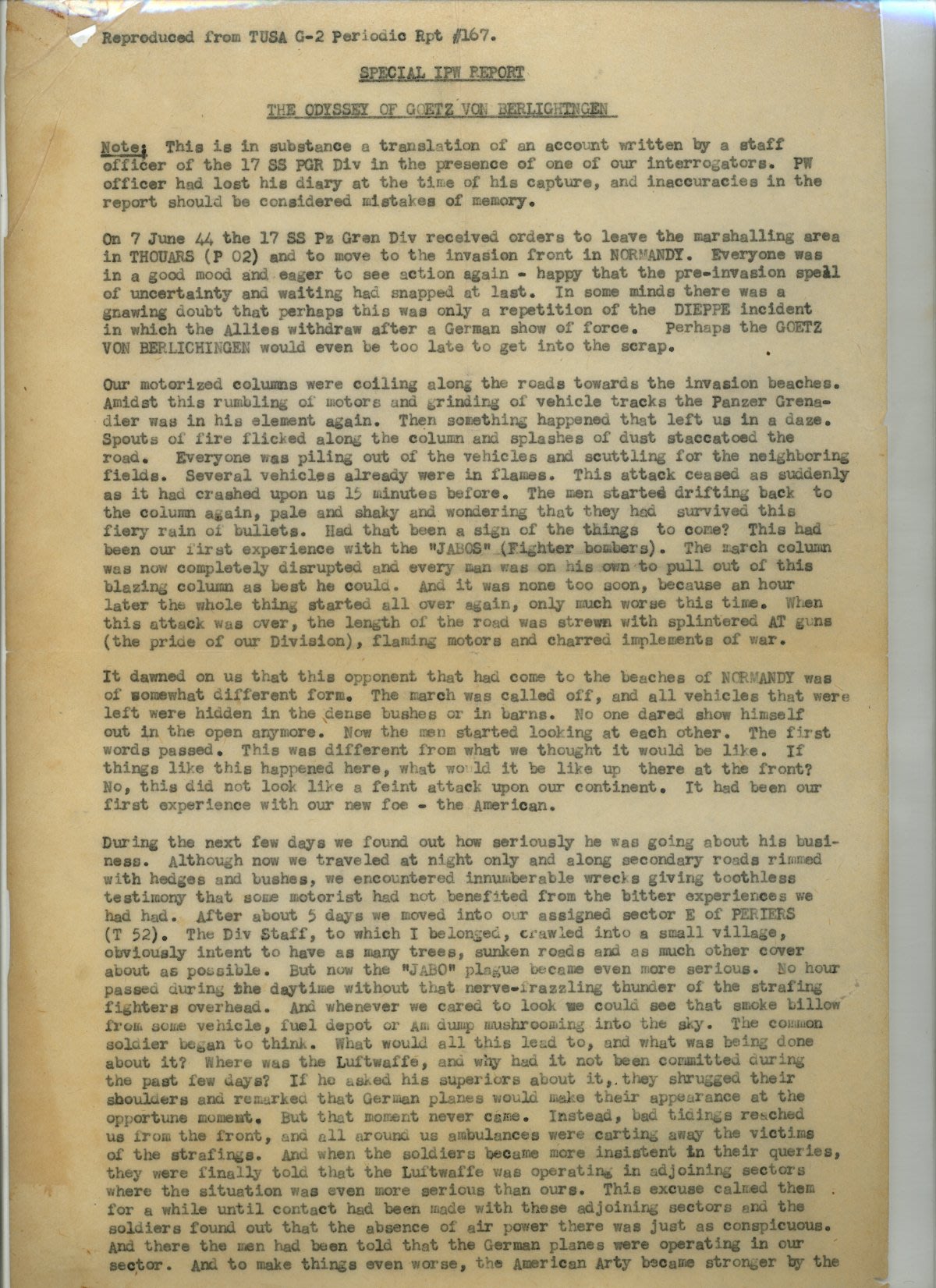 We forget that when D Day took place, two things had happened already. The first event was that the German Army had been defeated in the Field on the Russian Front during the preceding year at both Stalingrad and worse at Kursk. From then on there was no creditable way left to win the war and Hitlers only option was to go down fighting. The second event was that tactical air supremacy was created over Northern France. This meant that the German forces had no meaningful air support.

This unit learned all that the hard way when they attempted movement during daylight and got badly cut.

Yet in spite of that these units or units like them staged a fighting retreat all the way back to Gernany. It was a remarkable feat in itself. They also all knew better.

American G.I. John Frankemolle was guarding a group of captured German soldiers in Europe during World War II when an intelligence officer handed him an interrogation of prisoner of war (IPW) report. The officer told Frankemolle to keep the papers to himself and give it back to him after reading it — but that was the last time the two ever saw each other.

Seventy years later, 90-year-old Frankemolle still has that report, which he stored in his Long Island home alongside photos and mementos from his period of service with the U.S. Navy Armed Guard. The two-page Special IPW Report, titled The Odyssey of Goetz Von Berlightngen, is an English translation of a first-hand account written by an unnamed Nazi Schutzstaffel (SS) staff officer in the presence of his American interrogators.

Frankemolle believes he may have one of the last copies of that forgotten document, which his family agreed to share with Business Insider.

Nazi SS combat troops were Hitler's most diehard and elite soldiers, still notorious for their wartime atrocities. But this officer's account reveals that he and his comrades fought hard — but suffered from waning morale in the months following the Allies' successful D-Day invasion of the European mainland on June 6, 1944.

You can find the full document at the bottom. But here are the highlights of a jarringly intimate glimpse into the enemy camp during World War II.

Heading to the front The officer's unit, the 17th SS Panzer Grenadier Division — named after a spelling variation of the medieval German knight  Götz von Berlichingen —  headed from Thouars, France, to Normandy to fight the Allied forces landing there.  "Everyone was in a good mood and eager to see action again — happy that the preinvasion spell of uncertainty and waiting had snapped at last," the German SS officer wrote.

As the motorized column traveled along French roads, it was ambushed from the air by an enemy it had never encountered before.

"Something happened that left us in a daze," the officer wrote. "Spouts of fire flicked along the column and splashes of dust staccatoed the road. Everyone was piling out of the vehicles and scuttling for the neighboring fields. Several vehicles already were in flames."

The startled soldiers only continued their march after 15 minutes of strafing and bombing. "The men started drifting back to the column again, pale and shaky and wondering that they had survived this fiery rain of bullets. Had that been a sign of things to come? This had been our first experience with the 'Jabos' (Fighter bombers)."

An hour later a second and more effective air attack left the French road strewn with destroyed vehicles and equipment. The officer had this to say:

It dawned on us that this opponent that had come to the beach of Normandy was of somewhat different form. The march was called off, and all vehicles that were left were hidden in the dense bushes or in barns. No one dared show himself out in the open anymore. Now the men started looking at each other. The first words passed. This was different from what we thought it would be like. If things like this happened here, what would it be like up there at the front? No, this did not look like a feint attack upon our continent. It had been our first experience with our new foe — the American.

The division now traveled only in darkness and on secondary roads. When the soldiers reached their assigned sector near the French town of Periers, they began wondering why the German air force, known as the Luftwaffe, hadn't appeared, according to the officer's account:

But now the "Jabo" plague became even more serious. No hour passed during the daytime without that nerve-frazzling thunder of the strafing fighters overhead. And whenever we cared to look we could see that smoke billow from some vehicle, fuel depot or ammunition dump mushrooming into the sky. The common soldier began to think. What would all this lead to, and what was being done about it? Where was the Luftwaffe, and why had it not been committed during the past few days?

Officers lied to lower-ranking soldiers that the German planes were operating in adjacent sectors where they were needed even more.

Complaints arose that the division's fighting capabilities were deteriorating while the enemy's was strengthening.

"The hope of driving the Americans back into the [English] Channel had already given way to a hoping of being able to hold our own against the invaders," the officer wrote.

Defeat An American ground advance near Coutances, France, forced the unit to pull back.

The decisive blow came on July 26, when 2,000 heavy bombers annihilated several German sectors and the 17th SS Panzer Grenadier Division ceased to exist in anything more than name.

Here is the officer's amazing description of the chaotic retreat:

No human account ever could describe the hardship, the sacrifice, the misery the men of this division alone experienced. No one who finished this retreat still alive will ever forget this Gathsename [place of suffering], because each village, each road, even each bush seared into his brain the memories of terrible hours, insufferable misery, of cowardice, despair and destruction.

The German officer found a regrouping area away from the destruction. There, he rounded up stragglers and deserters from other units and forced them to join the ranks of the beleaguered SS division as replacements for all those lost.

"And that is the history of the 17 SS Pz Gren Div GOETZ VON BERLIGHINGEN up to my capture (1 Nov 44)," concludes the unnamed German officer's account.

Frankemolle himself landed on Omaha Beach shortly after the initial invasion waves to deliver ammunition to the advancing troops. However, he spent most of his service in Europe as a gunner aboard a supply ship.

He believes the German SS officer who wrote this account was among the group of prisoners he guarded for one night, although he was not involved in his capture.

Read the original document with much more detail below. 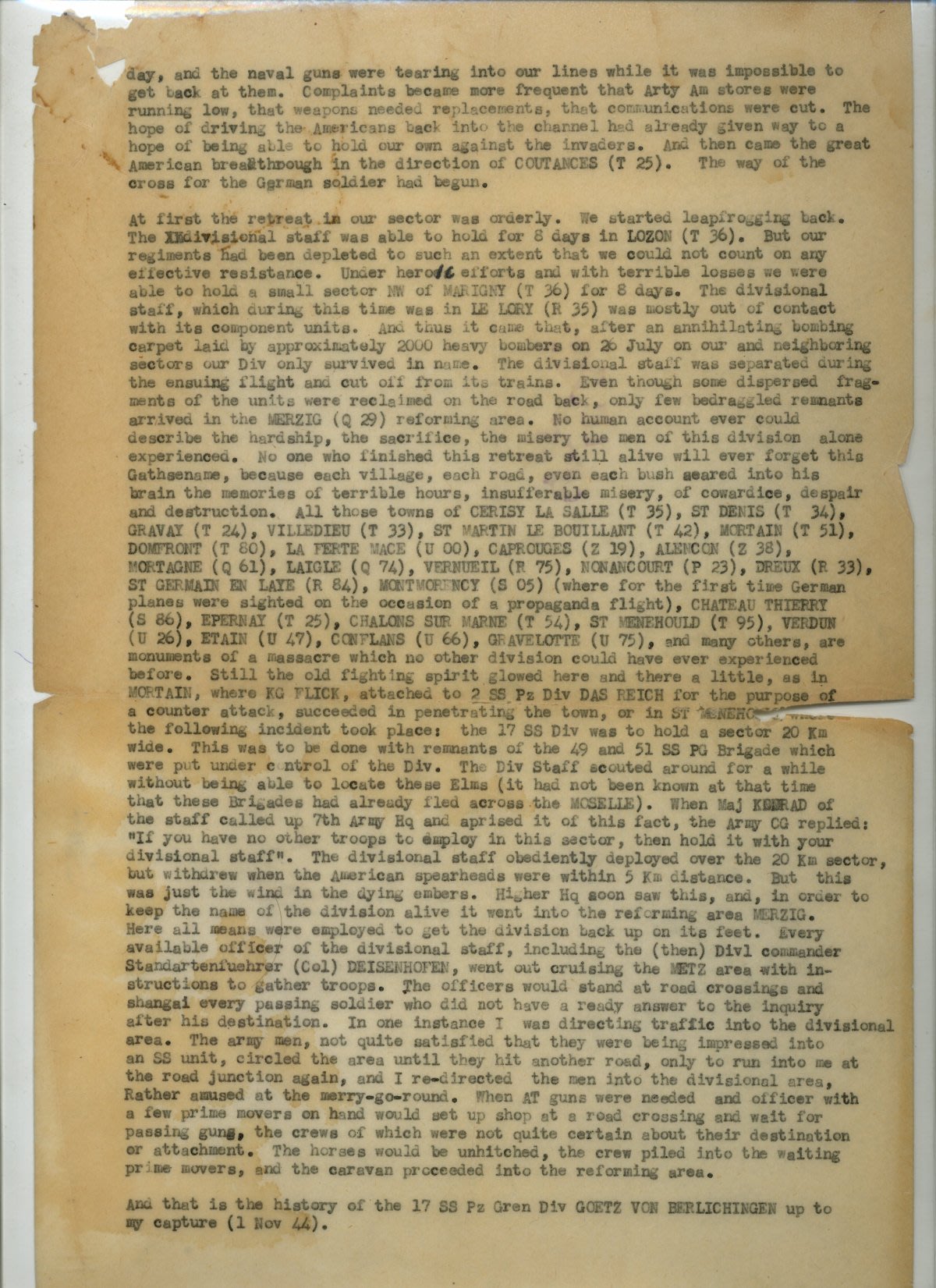