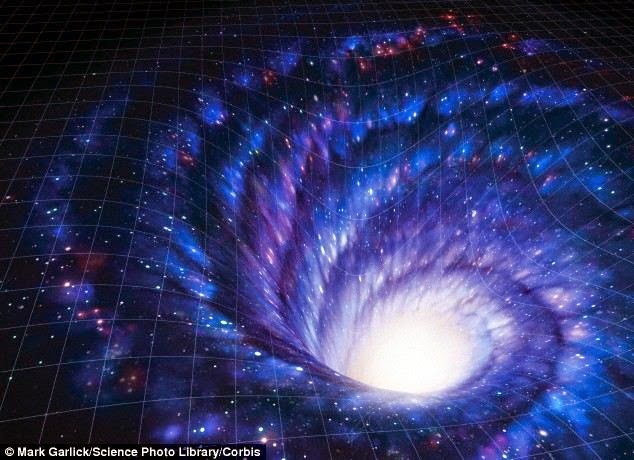 I also suspect that we will produce worm holes spontaneously and develop them from there. Theoretical work is helpful in establishing validity but there is way too much here to count on a simple theory to fall out.

I have posted a lot on wormholes and it is worth while googling this blog for comment.

I also think that the time aspect can be managed sufficiently to produce useful systems capable of continuous transport. This would massivelycut the costs built into our civilization while making interstellar trtansport possible.


We’ve all wished someone from the future could send us tomorrow’s lottery ticket numbers.

While it may seem wishful thinking, a physicist from Cambridge University believes that, in theory, it could be possible.


He argues that if a thin wormhole stays open long enough, people might send messages instantly through time using pulses of light.

Wormholes are theoretical tunnels that create shortcuts in space-time. Dr Luke Butcher at Cambridge University argues that if a thin wormhole stays open long enough, people could send messages through time using pulses of light. In theory, this light- called a photon - could carry a message to a distant past or future

WHAT IS A WORMHOLE?
Space-time can be warped and distorted. It takes an enormous amount of matter or energy to create such distortions, but theoretically, distortions are possible.

In the case of the wormhole, a shortcut is made by warping the fabric of space-time. Imagine folding a piece of paper with two pencil marks drawn on it to represent two points in space-time.

The line between them shows the distance from one point to the other in normal space-time.

If the paper is now bent and folded over almost double - the equivalent to warping space-time -  then poking the pencil through the paper provides a much shorter way of linking the two points, in the same way a wormhole would create a shortcut.

The problem with using wormholes to travel in space or time is that they are inherently unstable. When a particle enters a wormhole, it also creates fluctuations that cause the structure to collapse in on it.

The latest study suggests there are unusual-shaped wormholes than may be able to stay open longer than normal.

It sounds like the stuff of science fiction, but the theory of wormholes being used to send objects through time was first suggested by Albert Einstein's calculations.

Wormholes are theoretical tunnels through the fabric of space-time that can create shortcuts for long journeys across the universe.

The problem with his theory is that, if wormholes exist, they don’t stay open long enough for a human, or even a single particle of light, to pass through them.

But a new study at Cambridge University suggests that some wormholes are capable of staying open long enough to send messages backwards and forwards through time.

In 1988, physicist Kip Thorne at the California Institute of Technology suggested that wormholes might be kept open through the use of a negative energy, known as Casimir energy.

According to modern physics, the vacuum is full of fluctuating electromagnetic waves of different possible wavelengths which creates a vast amount of energy, normally invisible to humans.

Between two parallel plates in a vacuum, some energy waves would be too large to fit through creating a negative Casimir energy.


Professor Luke Butcher’s recent paper builds on that theory by suggesting that if a wormhole is a lot longer than it is wide, the amount of Casimir energy naturally present inside it would be enough to allow it to stay open longer than normal.

‘My approach was to see if the wormhole itself – because it has a tube-like structure - could create the same effect as the plates,’ Dr Butcher told MailOnline.

‘My calculations showed that if a wormhole is very long compared to how wide it is, you can get negative energy created in the centre of the wormhole.

‘It’s not quite the right sort to keep the wormhole stable – which is what I’d hoped - but it does mean the wormhole collapses very slowly.'

The wormhole would be open just long enough, Dr Butcher suggests, to send a photon through to the centre.

Skinny wormholes could send messages through time
16:56 20 May 2014 by Anil Ananthaswamy


Like some bizarre form of optical fibre, a long, thin wormhole might let you send messages through time using pulses of light.


Predicted by Einstein's general theory of relativity, wormholes are tunnels connecting two points in space-time. If something could traverse one, it would open up intriguing possibilities, such as time travel and instant communications.


But there's a problem: Einstein's wormholes are notoriously unstable, and they don't stay open long enough for anything to get through. In 1988, Kip Thorne at the California Institute of Technology and his colleagues speculated that wormholes could be kept open using a form of negative energy calledCasimir energy.


Quantum mechanics tells us that the vacuum of space-time is teeming with random quantum fluctuations, which create waves of energy. Now imagine two metal plates sitting parallel in this vacuum. Some energy waves are too big to fit between the plates, so the amount of energy between them is less than that surrounding them. In other words, space-time between the plates has negative energy.
Slow collapse
Theoretical attempts to use such plates to keep wormholes open have so far proved untenable. Now Luke Butcher at the University of Cambridge may have found a solution.


"Unfortunately, this energy isn't enough to keep the wormhole stable. It will collapse," says Butcher. "But the existence of negative energy does allow the wormhole to collapse very slowly." Further rough calculations show that the wormhole's centre might remain open long enough to allow a pulse of light to get through.


A wormhole is a shortcut through space-time, so sending a light pulse through one could allow faster-than-light communication. And as the two mouths of a wormhole can exist at different points in time, in theory a message could be sent through time.

Butcher cautions that a lot more work is needed to confirm that other parts of the wormhole besides the centre remain open long enough for light to make it all the way through. He also needs to work out whether a pulse large enough to transmit meaningful information could sneak through the slowly collapsing throat. And, of course, we are a long way off translating the theoretical equations into a physical object.


"Does this mean we have the technology for building a wormhole?" asks Matt Visser at the Victoria University of Wellington in New Zealand. "The answer is still no." Still, he is intrigued by Butcher's work. "From a physics perspective, it may revitalise interest in wormholes."

The worm hole would be open just long enough, Dr Butcher suggests, to send a photon through to the other side. Because the ends of a wormhole can exist at different points in time, if Professor Butcher's theory proves correct, a message could be sent through time


Because the ends of a wormhole can exist at different points in time, if Professor Butcher’s theory proves correct, a message could be sent through time.

Dr Butcher warned a lot more work needs to be down to confirm his theory.

For instance, scientists still need to find out whether a pulse of light large enough to transmit a meaningful message can get through a collapsing wormhole and whether the pulse can actually escape the wormhole completely.
4
‘More calculations need to be done away from centre closer to mouths to see if the theory holds true,’ added Dr Butcher.

‘I would also like to look at the opposite case.

'Could a very short and fat worm hole be able to send messages through time?
‘This is all very much theoretical, but the possibilities are intriguing.’