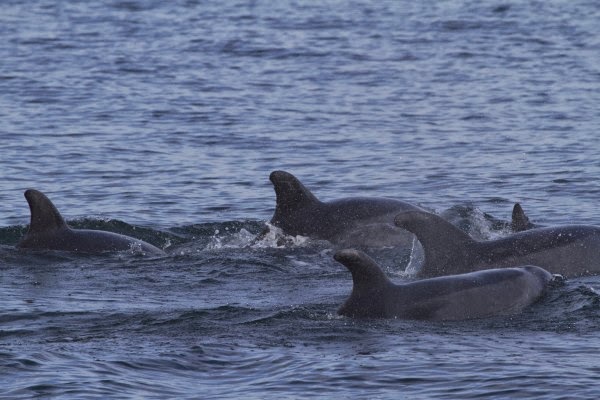 This is an astonishing story and powerfully informs us that as we learn to properly work with the ocean, that our natural allies in this endeavor are already there for us. I wonder why?

Recall that we have an outstanding conjecture that humanity established a global civilization as early as 40,000 years ago until the deliberate abandonment in preparation for the Pleistocene Nonconformity of 12900 years ago. That happens to be an effective working span of some 27,000 years at least. Assuming they then took at least twenty thousand of those years to reach modernity, we still have several thousands of years in which to prefect husbandry methods. That would include the oceans and would require the need for smart dolphins.

Thus it is possible that this affinity is no accident at all.

Posted by Maddalena Bearzi of Ocean Conservation Society in Ocean Views on May 29, 2014

One day, my research team and I were following a school of bottlenose dolphins near shore as we do on a regular basis in the waters off Los Angeles, California. We just wrapped up our photo-identification work  and were moving on to take video of dolphin social interactions and enter data on behavior.

The dolphins were still feeding in circle near shore, when suddenly, one individual changed direction heading out toward deeper water. A minute later, the rest of the school turned to follow. We were so accustomed to tracking these coastal metropolitan dolphins back and forth within a few hundred meters of the beach, that seeing them abruptly leave a foraging ground and change direction came as a surprise to the research team. I decided to follow them.

The dolphins increased their speed, still heading offshore as I pushed the throttle ahead to keep pace while one of my researchers recorded this hasty change in behavior on the sighting form. Somewhere near three miles offshore the dolphin group stopped, forming a sort of ring around a dark object in the water.

“Someone’s in the water!” yelled my assistant, standing up and pointing at the seemingly lifeless body of a girl. For a moment, we were silent. Then, slowly, I maneuvered the boat closer. The girl was pallid and blonde and appeared to be fully clothed. As the boat neared, she feebly turned her head toward us, half-raising her hand as a weak sign for help.

I cut the engine and called the lifeguards on the VHF radio. They told us not to do anything until they arrived on site but it was our unanimous feeling that if we didn’t act immediately, the girl would die. We decided to ignore lifeguard’s instructions, instead pulling the frail and hypothermic body on board. I called the lifeguards back and informed them that she was alive and that we had her aboard and we were heading back to Marina del Rey, the closest harbor, as quickly as possible.

“She is cyanotic,” said one of my researchers, also a lifeguard, after a cursory examination. “She has severe hypothermia. We need to get her warm!” We managed to get some of her wet garments off and wrap her in a blanket. We took turns keeping her warm by huddling with her under the blanket.

The girl was around eighteen and probably foreign because we couldn’t seem to communicate. We tried speaking French, Italian, and Spanish to no avail and she was barely able to speak but none of us could understand what she was saying. I couldn’t avoid noticing a plastic bag tied around her neck. It was sealed and seemed to contain her passport and a folded handwritten note. Somewhere near the harbor, we met up with the lifeguard rescue boat. We handed her off to them and followed them back to port.

A couple of hours later, we were all waiting outside the emergency room at the Marina del Rey hospital. The ER doctor came out to talk with us. The girl, it seems, would pull through, and he thanked us for our quick action. He tells us the girl was vacationing in L.A. from Germany and, as the letter found in her plastic bag explained, she was attempting suicide. If we hadn’t found her, if the dolphins hadn’t led us offshore when they did, to that specific place, she would have died.

Busy as we were trying to save the girl, we completely lost track of the dolphins. What might they have done with her if we hadn’t been there? Might they have tried to save her? There are many anecdotal accounts of dolphins saving humans from death and disaster, either by guiding them to shore, fending off sharks or helping them to remain afloat until help arrives.

Many scientists think dolphins do not, in fact, save humans because there is not enough hard scientific evidence to support these stories. But that day I witnessed coastal bottlenose dolphins suddenly leave their feeding activities and head offshore. And in doing so, they led us to save a dying girl, some three miles offshore. Coincidence?

This article has been adapted from the book Dolphin Confidential: Confessions of a Field Biologist (Chicago University Press, 2012).

Maddalena Bearzi has studied the ecology and conservation of marine mammals for over twenty-five years. She is President and Co-founder of the Ocean Conservation Society, and Co-author of Beautiful Minds: The Parallel Lives of Great Apes and Dolphins (Harvard University Press, 2008; paperback 2010). She also works as a photo-journalist and blogger for several publications. Her most recent book is Dolphin Confidential: Confessions of a Field Biologist(Chicago University Press, 2012).