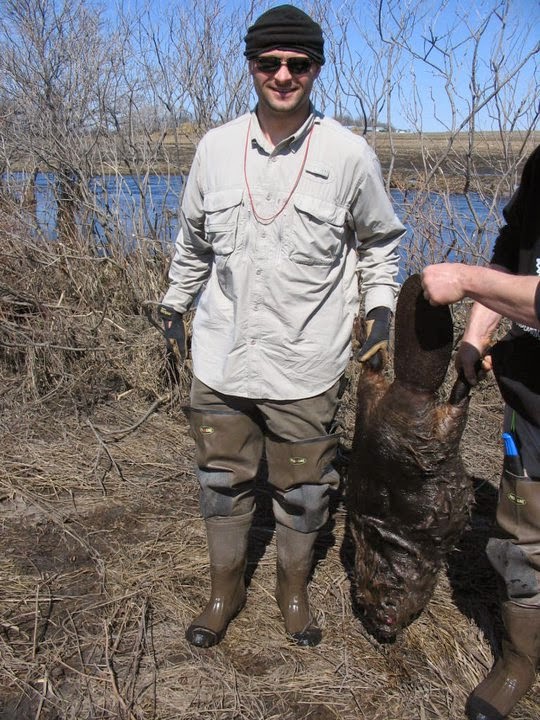 This is an insightful article that bears reading. As I have been posting an actively groomed forest is a healthy forest and along with all that comes species management to produce ample nut and fruit harvests. Now we discover just how critical predictor management becomes also.

Predator control allows ample utilization of the habitat and even supplies the remaining preditors with an ample supply of scavenged game as well. As this item makes clear, the game density can be sustained at a huge level provided predator behavior is tightly managed.

A hundred fold increase in game availability would actually allow higher levels of carnivore population as well. What this really tells us is that predators attack the young who represent the future breeding population. Old bucks and dfoes get left alone because they are too tough to confront.

Human management might even look to taking over the hunting aspect of feeding the local scavengers. This is obviously needed just to maintain the preditor population at the correct levels and can be readily extended to select and drop surplus herd anima.ls. Add in my ideas of providing winter fodder as well to allow fattening and a major annual harvest and we have established a human wild husbandry system that is sustainable and capable of a huge output. It also produces a steady stream of pelts as well.

by theSurvivalistBlog.net Contributor on May 29, 2014
by Bruce ‘Buckshot’ Hemming

Being a Modern Mountain man I have traveled all over and have had some very unique experiences in my lifetime. I snared a wild pig in Hawaii, trapped arctic blue fox in Alaska, trapped monster sized mink in North Dakota, and had some hair rising Spring beaver trapping in Upper Michigan. Nothing gets the blood flowing like tracking a bear down that stole your beaver, trap and all. While your only defense is a single shot .22 rifle. Looking for adventure takes on a whole new meaning when you see the trap, the beaver half eaten, and you are wondering where Mr. Bear is?

Through my many adventure and love of nature I have matured. Now I spend time researching about the early Mountain Men and the Native Americans and how they survived. The modern prepper I think will find these facts very interesting. One journal I read talked about an 8 man group that came down from Canada to the Wyoming territory to trap beaver and other furs worth cash money.

They become stuck in a valley when heavy snows sealed off the pass with 11 foot tall snow drifts. The other big game animals in the area had already left. These men had to survive until the spring melt. How did they survive to tell their harrowing tale of plight and misery? By trapping beaver. The traps were able to feed them until the spring melt came.

Please remember these were far better woodsmen then compared to today’s hunters. These men were hard, tough, and did not have the convenience of running down to the local grocery store for supplies. Even with all their hunting skills without the traps they would have starved. Remember that lesson for it will tell a story worth knowing.

Knowledge is power. I read a lot about Native Americans. Though interesting enough we Americans tend to think of the movies as a real true source of information and to give us insights into how they lived. But this is not true. Historians perceived of how they lived and some scientist believe the correct term might be used as Gatherers/Hunters instead of the common Hunter/Gatherers.
This means they spent more time collecting nuts and berries then they hunted. History is a great teacher. For instance, in September of 1869, the Cook-Folsom-Person Expedition, met the Native Americans who were gathering and drying large quantities of chokecherries, at the mouth of Tom Miner Creek just North of present day Yellowstone park. A strict diet of just meat I am sure would become old to everyone but it is also important to realize they were also getting important vitamin and minerals from the plants, fruits and nuts they gathered also.

Wikipedia defines a hunter-gatherer or forage society as one in which most or all food is obtained from wild plants and animals, in contrast to agricultural societies which rely mainly on domesticated species. I would also add modern farming methods. According to the definition Hunter/Gatherer is appropriate as long as one remembers that it’s not just hunting and hundreds of pounds of nuts and berries are also collected and consumed.

I remember reading a book about how the Native Americans would gather cattail roots to dry them and grind them into flour. Their grinding method was using stones which as you might know will produce stone grit in the cattail flour. His theory was that is why most Native Americans in the 1800′s didn’t have their teeth after the age of 40 due to the stone grit wearing their teeth down.

What is often not explained or even talked about in survival manuals and wild plant guides is how much is gathered? It was common among Native Americans that 100 bushels of nuts was collected per household.

But this is where nature has a cruel trick for you to understand why you must be able to adapt and over come.

I have spent decades in the woods in one thing you learn is some years different things are plentiful. I have seen a couple of times in my life unbelievable huge acorn crops covering the dirt roads. But that only happened once a decade. Other years were a normal crop and still another year was no acorns to be found. I bring this up as a lesson you can’t depend on only one crop such as acorns to survive.

Are you a well-rounded prepper? Do you want to learn modern methods for gathering food quickly? This spring I taught a class using modern snares for spring beaver trapping. Not only did they learn how to make snares, set snares, catch beaver, clean beaver, cook beaver, but also proper care of the fur. The guys had beaver ear muffs made for their loved ones. Nothing better to keep the ears warm in the winter than real fur.


How many people preparing have thought about replacement hats and mittens for cold weather? Nothing in the world is warmer than natural fur. I know, I tested my muskrat hat and beaver mittens at 40 below in a North Dakota winter. Nothing has ever been able to keep me as warm as real fur.

Do you know how to tan hides to make soft leather? Like anything in life there is learning curve to learning the proper steps in making soft useable leather?  I have classes that I teach folks hands on training so you can truly learn the whole process of how to trap and snare but also how to clean and cook what you catch plus how to tan the furs to make soft leather.

An often overlooked area in preppering is how to increase the available game animals. This valuable insight on how to increase game herds is vital information for long-term survival. Many people tend to over-look the importance of predator control to increase the available good eating prey species for yourself and your family. People are quite confused on this topic because of a bombardment of the hug a predator crowd that preaches predators balance nature.

Really? Let’s test that theory with real science, not fantasy from fiction writers. How devastating are grizzly bears and wolves on the caribou population in Alaska? Dr. Kay noted in a study in 1996 that carnivore predation alone can reduce caribou population densities to only 1 percent, or less, of what the habitat is capable of supporting.

That means for every 1 caribou there could have been 99 more! Further to prove his theory Dr. Kay then studied caribou on an island with no predators. The results are shocking. The island caribou had a population density of 7.45 per km compared to non migratory eastern herd with a startling 0.03 caribou per km that had wolves and grizzly bears preying on the caribou. It is clear for herd health predator control is very beneficial to increase available wild game.

This was not surprising to me after reading other studies of ducks, where the predators such as coons, red fox, coyotes, and skunks were removed to greatly increase duck numbers. From low numbers of hatch survival rate of 17% skyrocketing up to 80% success rate. Once you start studying this you will quickly learn that controlling predators greatly increases the available game in an area. Predators need to be controlled. The more control on predators the more increase you will see in available game animals for your survival. It’s really common sense.

Once you study this and understand it is clear as day. Trapping experience over the decades I have learned how much of a given species to take out but still leave enough for a healthy supply of animals the following year. This is called management. With proper management you can have sustainable wildlife year after year. This is more of a guaranteed food supply. But of course, other people can throw the balance off.

If you are to live in harmony with nature you must understand the rules. Nature can provide for you but it comes down to a few simple guidelines. Do you have the understanding to take advantage of all available resources? Like the Mountain Men stuck in the valley they did not become depressed and just give up.

They took the problem on, adapted, used the tools they had to ensure their own survival. Survival of the fittest is a well-known statement. Apply it to your survival strategy. Look at wild game and wild plants as added food to your food storage system. Every meal you can supply greatly increase your survivability.

From a preppers stand point I think it is clear you need to be well-rounded in the art of Hunter/gatherer. You should know the native plants in your area, how to dry them, and preserved them. How to trap and snare. How to tan fur to make soft leather. The very important predator control to increase the available game species in your area.

I have written about it before but it bares repeating. Nature doesn’t care if you are ignorant about survival, if you fail and starve, the sun was still rise the next day without you. Think about it.