Nikiski Saves Alaska... and the U.S.? 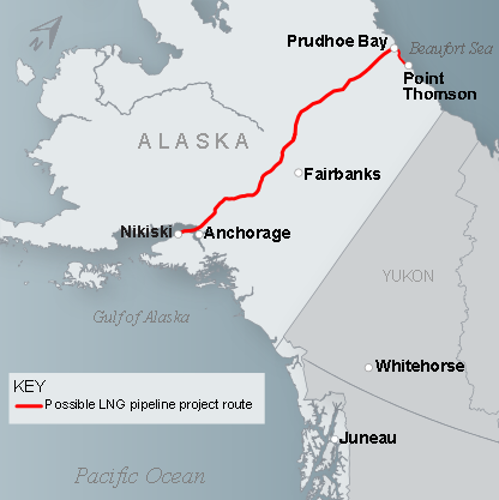 Most folks are largely unaware of the massive changes taking place in the natural gas industry. We also have LNG proposals shaping up in British Columbia as well. There is simply way too much gas available for shipping to ever be absorbed by the USA market, while SE Asia is learning to enjoy the benefits of gas. Thus it must be piped to the coast.


Yet even with this wall of massive capital developments what disquiets myself is that I know now where tomorrow's energy is coming from and I can deliver it now.


Sooner or later that jam will break and all these plans must be dust.

Nikiski Saves Alaska... and the U.S.?


Nowadays, it seems like every positive headline regarding our energy boom is coming out of just two states: Texas and North Dakota.

Yet this only captures a piece of the energy puzzle. Truth be told, it's about time there was some good news elsewhere.

But the last place I expected this news to come from was Alaska, where a decades-long decline in oil production put the state into a full-blown crisis.

Despite this, there's no doubt that the Last Frontier State is still home to tremendous reserves of oil and gas. And the state government has always supported exploring for, drilling, and developing its oil resources.

So recently, Alaska's governor made an announcement that will have huge implications for natural gas investors.

Before I get to the news, let's first take a look at why Alaska's natural gas resources hold more value than you might first think.

The Japanese consumed an astounding 37% of the world's LNG in 2012 to fill the gap left behind after the shutdown of their nuclear reactors.

As demand from these three LNG consumers surged, prices ballooned out of control...

As you can see above, gas prices in India and China have grown unstable.

In response to the price discrepancy between Asian and American gas, our typically anti-fossil fuel federal government made an unexpected move. As you may know, the Department of Energy has been slowly — very slowly — giving permits to companies that wish to export LNG.

In what would seem to be contradictory policy, the EPA has also imposed new rules limiting carbon emissions, effectively creating a bull market for natural gas.

But as these rules take effect, and as we start exporting natural gas, demand here in the U.S. will skyrocket as supply drops, resulting in higher energy bills and a blunting of the manufacturing renaissance

Last week, Alaska's governor, Sean Parnell, received support from the state legislature to invest millions of dollars in an 800-mile natural gas pipeline that would stretch from the North Slope to LNG export plants to the south.

This would expose Alaska to the lucrative Asian LNG market without ending our cheap supply at home. And that's not to mention that it could also pad your portfolio if you play it right...


You see, after 40 years of tussling between regulators, environmentalists, and oil and gas companies, Alaska will finally have a chance to avert its looming energy crisis by developing its natural gas resources.

In his announcement, Governor Parnell said, “Real work is beginning now on engineering, design, and environmental field work... the state is now a full partner.”

Here is a map of Parnell’s announcement — the linchpin for the future of U.S. natural gas...

Nikiski is the planned site for a new major LNG facility, where gas piped from Prudhoe Bay and Point Thomson will be refined and shipped to Asian consumers desperate for cheap energy.

And thanks to the Natural Gas Act, Alaska already has federal approval to export its valuable resources to non-free trade countries all over the world.

With Nikiski's Pacific location, Japan and China will likely have first dibs on the North Slope gas coming in the next few years.

This is great news for Asian markets. Appliances, turbines, and furnaces in places like Japan, Taiwan, and South Korea are specifically designed for hotter-burning wet gas.

And this has the U.S. and energy investors poised for a double windfall...

The bottom in domestic gas prices will allow Alaska to take advantage of the record-high prices in Asia without corrupting our cheap supply in the Lower 48.

This means manufacturing companies that have been booming thanks to cheap natural gas will continue to have their vital feedstock without losing profit from price balancing.

So investors who choose the right chemical companies, domestic gas drillers, and soon-to-be exporters will find a fatter stock portfolio at their disposal thanks to our dual-pronged natural gas plan.

If you aren't sure how to invest your money following this announcement, my colleague Christian DeHaemer has an extensive track record charting energy prices in Asia. He even banked a 759% gain in 10 months on Petro Matad...

And he has found some potentially lucrative natural gas players that could surge once Governor Parnell's announcement finds legs in the mainstream financial press.

These aren't simply natural gas drillers; the companies he found are going to see record profits thanks to a special new bill designed by T. Boone Pickens called HR1364, which is going to dramatically boost the demand for natural gas in the U.S.


He and I both recommend them highly, and we hope you enjoy your new wealth.
Posted by arclein at 12:00 AM