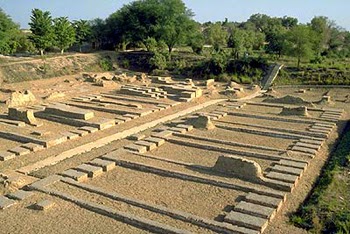 This is a fairly detailed report on this particular event. What is clear is that a nuclear war was waged using aircraft of some sort against large populations and other positions as well not obviously possessing comparable technology.

I want to observe that this does not necessarily mean anything. Our civilization has chosen to establish universal education and a consumer society. It is easy to imagine an alternative palace based system that does recruit the brightest and builds up a technological elite that does master the necessary science. Thus we have the population living with bronze age technology while the rulers have super weapons.
What is clear is that blasts occurred many places around the globe and many have yet to be discovered as well. We have evidence in Egypt and the Levant to note as well. If we start actually looking, I am sure that we will be shocked.
Then there is the matter of age. Since we have clearly modern human skeletons operating the agricultural tool kit of the past 10,000 years, it is plain that this culture arose between 8000 BC through as late as 1000 BC.
Except we have the Atlantean world between 3000BC and 1000BC. Is this event properly contemporaneous with the Atlantean world and is that shift of the radiocarbon dating modest? Are we right to dismiss the known dates at all.
My point is that the Atlantean world was a palace based culture with a different mathematica but effective none the less. While all our evidence supports a vigorous copper based advanced metallurgy it does not prevent advanced work.
I do know that Chinese alchemy as described 2500 years ago could plausibly have produced explosives of this power. Add in any form of aircraft and any other form of power plant except what we think is possible and you have the problem solved.
I find that large populations are not too likely much before the rise of Sumeria and an advanced technical elite requires that base surely.


Radiation still so intense, the area is highly dangerous. A heavy layer of radioactive ash in Rajasthan, India, covers a three-square mile area, ten miles west of Jodhpur. Scientists are investigating the site, where a housing development was being built.


For some time it has been established that there is a very high rate of birth defects and cancer in the area under construction. The levels of radiation there have registered so high on investigators’ gauges that the Indian government has now cordoned off the region. Scientists have unearthed an ancient city where evidence shows an atomic blast dating back thousands of years, from 8,000 to 12,000 years, destroyed most of the buildings and probably a half-million people. One researcher estimates that the nuclear bomb used was about the size of the ones dropped on Japan in 1945.


The Mahabharata clearly describes a catastrophic blast that rocked the continent.

“A single projectile charged with all the power in the Universe…An incandescent column of smoke and flame as bright as 10,000 suns, rose in all its splendor…it was an unknown weapon, an iron thunderbolt, a gigantic messenger of death which reduced to ashes an entire race.

“The corpses were so burned as to be unrecognizable. Their hair and nails fell out, pottery broke without any apparent cause, and the birds turned white.


“After a few hours, all foodstuffs were infected. To escape from this fire, the soldiers threw themselves into the river.”


Historian Kisari Mohan Ganguli says that Indian sacred writings are full of such descriptions, which sound like an atomic blast as experienced in Hiroshima and Nagasaki. He says references mention fighting sky chariots and final weapons. An ancient battle is described in the Drona Parva, a section of the Mahabharata.


“The passage tells of combat where explosions of final weapons decimate entire armies, causing crowds of warriors with steeds and elephants and weapons to be carried away as if they were dry leaves of trees,” says Ganguli.

“Instead of mushroom clouds, the writer describes a perpendicular explosion with its billowing smoke clouds as consecutive openings of giant parasols. There are comments about the contamination of food and people’s hair falling out.”


Archeologist Francis Taylor says that etchings in some nearby temples he has managed to translate suggest that they prayed to be spared from the great light that was coming to lay ruin to the city.

“It’s so mid-boggling to imagine that some civilization had nuclear technology before we did. The radioactive ash adds credibility to the ancient Indian records that describe atomic warfare.”

Construction has halted while the five member team conducts the investigation. The foreman of the project is Lee Hundley, who pioneered the investigation after the high level of radiation was discovered.


There is evidence that the Rama empire (now India) was devastated by nuclear war. The Indus valley is now the Thar desert, and the site of the radioactive ash found west of Jodhpur is around there.

Consider these verses from the ancient (6500 BC at the latest) Mahabharata:

…a single projectile
Charged with all the power of the Universe.
An incandescent column of smoke and flame
As bright as the thousand suns
Rose in all its splendour…
a perpendicular explosion
with its billowing smoke clouds…
…the cloud of smoke
rising after its first explosion
formed into expanding round circles
like the opening of giant parasols…

..it was an unknown weapon,
An iron thunderbolt,
A gigantic messenger of death,
Which reduced to ashes
The entire race of the Vrishnis and the Andhakas.
…The corpses were so burned
As to be unrecognisable.
The hair and nails fell out;
Pottery broke without apparent cause,
And the birds turned white.

After a few hours
All foodstuffs were infected…
…to escape from this fire
The soldiers threw themselves in streams
To wash themselves and their equipment.

Until the bombing of Hiroshima and Nagasaki, modern mankind could not imagine any weapon as horrible and devastating as those described in the ancient Indian texts. Yet they very accurately described the effects of an atomic explosion. Radioactive poisoning will make hair and nails fall out. Immersing oneself in water gives some respite, though it is not a cure.
When excavations of Harappa and Mohenjo-Daro reached the street level, they discovered skeletons scattered about the cities, many holding hands and sprawling in the streets as if some instant, horrible doom had taken place. People were just lying, unburied, in the streets of the city. And these skeletons are thousands of years old, even by traditional archaeological standards. What could cause such a thing? Why did the bodies not decay or get eaten by wild animals? Furthermore, there is no apparent cause of a physically violent death.


These skeletons are among the most radioactive ever found, on par with those at Hiroshima and Nagasaki. At one site, Soviet scholars found a skeleton which had a radioactive level 50 times greater than normal. Other cities have been found in northern India that show indications of explosions of great magnitude. One such city, found between the Ganges and the mountains of Rajmahal, seems to have been subjected to intense heat. Huge masses of walls and foundations of the ancient city are fused together, literally vitrified! And since there is no indication of a volcanic eruption at Mohenjo-Daro or at the other cities, the intense heat to melt clay vessels can only be explained by an atomic blast or some other unknown weapon. The cities were wiped out entirely.


While the skeletons have been carbon-dated to 2500 BC, we must keep in mind that carbon-dating involves measuring the amount of radiation left. When atomic explosions are involved, that makes then seem much younger.


Interestingly, Manhattan Project chief scientist Dr J. Robert Oppenheimer was known to be familiar with ancient Sanskrit literature. In an interview conducted after he watched the first atomic test, he quoted from the Bhagavad Gita:


“‘Now I am become Death, the Destroyer of Worlds.’ I suppose we all felt that way.”


When asked in an interview at Rochester University seven years after the Alamogordo nuclear test whether that was the first atomic bomb ever to be detonated, his reply was,
Ancient cities whose brick and stonewalls have literally been vitrified, that is, fused together, can be found in India, Ireland, Scotland, France, Turkey and other places. There is no logical explanation for the vitrification of stone forts and cities, except from an atomic blast.


No trace of any meteoric material, etc., has been found at the site or in the vicinity, and this is the world’s only known “impact” crater in basalt. Indications of great shock (from a pressure exceeding 600,000 atmospheres) and intense, abrupt heat (indicated by basalt glass spherules) can be ascertained from the site. David Hatcher Childress in Nexus Magazine:


“The crater is formed in the basalt rock of thickness 600-700m (2,000 to 2,200 feet). This rock is made of many layers or flows which were laid why volcanic activity at various times, five of such flows are exposed at the crater rim. Thickness of these flows ranges from 5 to 30m.

“Lonar is a place of obscurities, especially as the only meteoric crater formed in basaltic terrain. It has remained relatively intact due to low degree of erosion by environmental agents, making it an excellent model for study. However, several strange things happen here:

1. The lake has two distinct regions that never mix — an outer neutral (pH7) and an inner alkaline (pH11) each with its own flora and fauna. You can actually do a litmus paper test here and check this for yourself.

2. There is a perennial stream feeding the lake with water but there seems to be no apparent outlet for the lake’s water. And it is also a big unsolved mystery where the water for the perennial stream comes from, in a relatively dry region like Buldhana. Even in the driest months of May and June, the stream is perpetually flowing. Lonar generates questions and more questions”. Lilyn Kamath

Sources
1. Best Evidence?, by Philip Coppens; Are the Indian remains of Mohenjo Daro and Harappa, their sudden abandonment and the apparent discovery of an ancient site with a layer of radioactive ash the best available evidence for the possibility that our ancient ancestors possessed a highly advanced technology – which might have included atomic warfare?
2. Nuclear events in Ancient India, Rajasthan: Evidence of Ancient Atomic Explosion
3. Evidence of Ancient Atomic Knowledge?