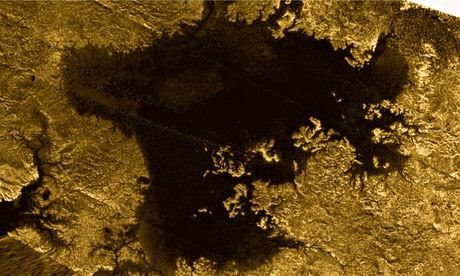 This is surely some form of berg that has broken free and then traveled to the witnessed location. Any other explanation must entail tide at least and that appears ruled out.


It is a pleasant surprise that will encourage a real visit perhaps sooner than anticipated.

It is certainly unexpected.

The mystery object, described as a 'magic island' appeared out of nowhere in radar images of a hydrocarbon sea on Saturn's giant moon, Titan. Photograph: JPL-Caltech/ASI/Cornell/NASA/PA
Ian Sample, science editor

Scientists are investigating a mystery object that appeared and then vanished again from a giant lake on Titan, the largest moon of Saturn.


They spotted the object in an image taken by Nasa's Cassini probe last year as it swung around the alien moon, more than a billion kilometres from Earth. Pictures of the same spot captured nothing before or some days later. 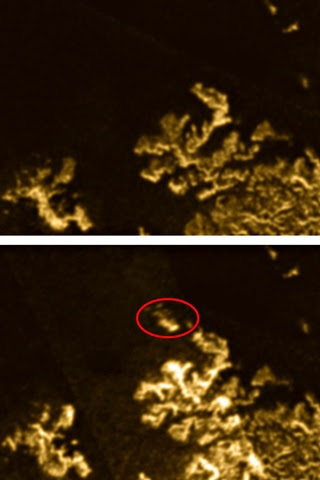 Little more than a white blob on a grainy image of Titan's northern hemisphere, the sighting could be an iceberg that broke free of the shoreline, an effect of rising bubbles, or waves rolling across the normally placid lake's surface, scientists say.


Astronomers have named the blob the "magic island" until they have a better idea what they are looking at. "We can't be sure what it is yet because we only have the one image, but it's not something you would normally see on Titan," said Jason Hofgartner, a planetary scientist at Cornell University in New York. "It is not something that has been there permanently."


Titan is one of the most extraordinary places in the solar system. The land is strewn with hydrocarbon dunes that rise above lakes fed by rivers of liquid methane and ethane. The atmosphere is so thick, and the gravity so weak, that a human could strap on wings and flap into the air. That air is laced with lethal hydrogen cyanide.


The largest moon of Saturn – there are more than 60 smaller ones – is the only place beyond Earth known to have stable liquids on its surface and rain falling from its skies. Spacecraft have mapped scores of lakes there. The three biggest are named after mythological beasts, the Kraken, Ligeia and Punga, and are large enough to qualify as seas, or mares.


The US team made their curious discovery while poring over radar images of Ligeia mare, a 150-metre-deep sea that stretches for hundreds of kilometres in Titan's northern hemisphere. Among the snapshots taken in 2007, 2009 and 2013 was one with the strange white feature, about six miles off the mountainous southern shore.


NASA handout photo dated 26/04/07 of the area in Titan's Ligeia mare before the object was seen (top) and 10/07/13 of the 'magic island'. Photograph: JPL-Caltech/ASI/Cornell/NASA/PA Roughly 12 miles long and six miles wide, the bright spot appears in an image dated 10 July 2013 but is missing from pictures of the same spot taken previously and on 26 July. Hofgartner said the team had ruled out any errors in the radar imaging equipment that could result in the blob.

Through a process of elimination, the scientists have whittled the number of potential explanations down to four. It could be one or more icebergs floating around, or material in suspension beneath the surface. But Cassini's radar might also have picked up a rush of bubbles coming from the depths of the sea, or captured the first signs of deep-sea waves on Titan.


Last year's Cassini fly-by found that Ligeia mare, Titan's second-largest lake, was as smooth as glass. The tranquil expanse of liquid methane and ethane had no waves or surface ripples larger than 1mm.


The profound stillness may be because the wind on Titan is so feeble. But that could be changing. Titan's orbital path and tilted axis make for seasons that last for seven Earth years. The northern hemisphere is gently warming now, as spring gives way to summer, which arrives in earnest in 2017. Warmer weather brings stronger winds, and stronger winds bring waves.

"This may be waves picking up. The sun is shining brighter, and that energy can be powering the winds. All you would need is a light breeze, around half a metre per second," said Hofgartner, whose study appeared in the journal Nature Geoscience.

But the wind on Titan may never be strong enough to stir truly impressive waves. "If you had a large enough surfboard, you could certainly float there, but I don't think you'd really get the waves you'd want," Hofgartner said. The hydrocarbon seas, he added, are a chilly -180C.

If waves are the cause of the curious white blob, then Cassini spotted them before they had spread more widely across the sea. Follow-up images in the next few months are expected to shed more light on the mystery.

"We now have the first tantalising glimpse of some sort of dynamical process in one of Titan's largest seas," said John Zarnecki, professor of space science at the Open University.

"The observations with Cassini's radar are close to the limit of sensitivity so hard to interpret. But they do seem to be the first sign of something going on in the sea. Is it floating solids or erupting gas bubbles from below or wave action? We just don't know.

The one thing we can say with certainty is that we just have to go back to Titan – but this time with a sea floater so that we can see close up just what is happening in the seas of this incredible place."

In March, some of the researchers who worked with Hofgartner reported what may have been glimpses of tiny waves on another Titan sea, called Punga mare. Instruments aboard Cassini found that sunlight reflecting off the sea was brighter than expected in places, an effect that could be caused by waves lapping at the shore.

Nasa has toyed with the idea of sending a boat to sail on the seas of Titan, but the proposal lost out to a mission to Mars. There are still hopes of exploring the moon with two other Nasa missions. One would fly a balloon on Titan and release a drone to map the surface. The other aims to drop a  submarine into the largest of Titan's seas, the 300-metre-deep Kraken mare.