Plants Can Actually Hear Themselves Being Eaten 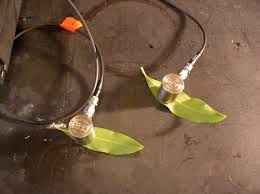 My understanding of consciousness has been evolving steadily and now we have to recognize the reality of plant consciousness that also guides the plant's responses as well. We have already said it anyway but had not fully assimilated all the obvious inferences. Consciousness is active at the cellular level for all life.

Thus the idea of a living conscious Gaia is sound although much of that consciousness is simply involved in moment to moment awareness. No great thoughts here. That is our trick and quite simply, we come up short even in terms of our own expectations. It is much harder than it looks.

What we presently cannot do successfully and we think that this is something we once did is share consciousness around us at least within a meaningful local range. This can be sufficient to command all nearby animals.


Commanding plants may also become a valuable skill and is perhaps part of the mime of the green thumb.

Nice Try, Vegans: Plants Can Actually Hear Themselves Being Eaten

While it's still unclear whether or not plants can actually feel us sinking our teeth in, one thing is for certain: You can be damn well sure they're hearing it.

Thanks to a new report from the University of Missouri-Columbia (MU), researchers have discovered that plants respond to the specific sounds caterpillars make when eating them, and what's more, the noises even prompt the plants into putting up additional defenses. We already knew that plant growth could change in reaction to certain sounds, but this is the first instance we've seen of a plant actually protecting itself from a predator's chomping, specifically.


In the study, the researchers put caterpillars on Arabidopsis, a small, cabbage-like plant, and pointed a laser at a reflective section of the plant's surface. That way, they were able to measure the different ways the plant moved in response to a chewing caterpillar. Then, the scientists removed the caterpillar from the equation entirely and only played back recordings they'd made of the crunching caterpillar's vibrations. For another plant, they played back only silence.


After placing live caterpillars back on both sets of plants, the researchers found that the set that had been exposed to the caterpillar's feeding sounds produced more mustard oil, a chemical that's meant to fend off hungry critters. According to Heidi Appel, senior research scientist in the Division of Plant Sciences in the College of Agriculture, Food and Natural Resources and the Bond Life Sciences Center at MU:


Our work is the first example of how plants respond to an ecologically relevant vibration. We found that feeding vibrations signal changes in the plant cells' metabolism, creating more defensive chemicals that can repel attacks from caterpillars.


From here, researchers plan to find out how exactly these vibrations are able to be sensed by the plants as they're being munched on. Either way, we do know one thing for sure: The world just got a little less smug for the vegan set.