I am Just in the Way 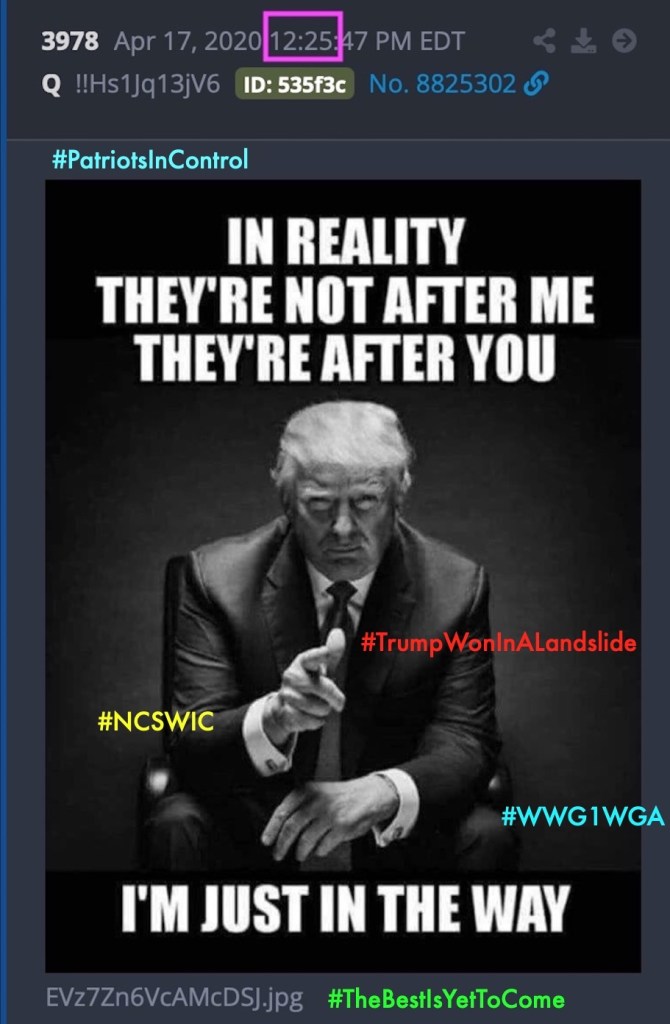 It goes without saying that the MSM has not reported on any of this at all.  Think about that simple fact if you must come here to read these simple statements by Trump a mere four days ago.
Understand that:
The set of legal constructs under which the USA operated since 1871 has been suspended and actual bankruptcy established.  This was formally pronounced but ignored as well by the MSM.
Trump remains Commander in Chief and this is understood world wide regardless of the faux presedency of Joe Biden.
The obvious election fraud is been slowly overturned by application of the rule of law.  This is to avoid a violent coup attempt.  This election fraud regime is in place world wide and will lead to the arrest of literally millions.  This may include thirty million CCP members as well.
We are now entering Red October.  The military is in place world wide.
we also hear that the Space Force is intercepting escaping enemy forces.  This is possible but implausible if you lack pertinent background.  The global story is big enough without tackling an alien narritive.  Part of that alien narritive is that our military is systematically destroying underground facilities operated by our alien enemies.  I have seen plenty of support material for this aspect but it could also be fabricated as a convenient cover as well.  Certainly we have had a large number of quakes reported in odd unliklely locales conforming to underground demolitionss.  way too many actually.
Understand that any alien presence, good and bad, will naturally establish a base underground to avoid local interferance. These certainly exist as we have ample confirmation through observation.  And why would they be in our atmosphere without a destination?
“I never conceded !!!

I almost said the F word

In reality they’re not after me, they’re after you, I’m just in the way.

That beautiful phrase “Made In The USA”

-We will shut down Joe Biden’s Border catastrophe.

-We will hold China accountable for unleashing the virus & charge them trillions of dollars.

-We will reign in Big Tech companies & restore the right to Freedom of Speech.

-We will defend our Constitution

-We will care for our Veterans & continue to strengthen our Military.

-Our country’s up against some of the most sinister forces we’ve ever seen.

-Never forget this Nation does not belong to them it belongs to YOU.

-MY FELLOW AMERICANS OUR FIGHT HAS ONLY BEGUN & WE’RE GOING TO MAKE SURE WE SEE IT TO THE END!!!