Trump’s Patriotism Vs. The New Anti-Americanism 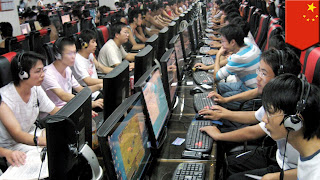 How in hell is it possible to be political and also anti American?  Yet the masters of the Democrats appear to be pushing such a narrative.  So who are those masters?  It should be impossible for a person raised in the USA to be properly Anti America, but it is certainly possible to be a paid shill..

Is is possible that the money supporting this and the actual guidance is coming to us through the CCP?   I throw this out, not because i have something so useful as evidence, but because the CCP and the NWO (NAZIs) share a common hatred of the USA in particular and a propensity for sustained political sedition.  We are certainly suffering from a very public continuing sedition.  It certainly makes perfect sense for the CCP to fund NWO efforts to subvert the USA political culture.

We are also seeing it in play in Canada as well but more tentative as we have not been softened up enough yet..  It was an afterthought.  With luck it will be all over soon enough.. .


Trump’s Patriotism Vs. The New Anti-Americanism

One wonders: Where is all this negativity, this constant griping and grousing by the left, going to lead? Do these people think America will turn with hope to a party that reflexively recoils at patriotic displays?

Despite all the grousing and griping about his “politicizing” of the Fourth of July and “militarizing” America’s birthday, President Donald Trump turned the tables on his antagonists, and pulled it off.

As master of ceremonies and keynote speaker at his “Salute to America” Independence Day event, Trump was a manifest success.

The crowd on the Mall was huge and friendly, extending from the Lincoln Memorial to the Washington Monument. The TV coverage was excellent. Friday, virtually every major newspaper had front-page stories and photos.

Earlier, former Vice President Joe Biden had snidely asked, “What, I wonder, will Donald Trump say this evening when he speaks to the nation at an event designed more to stroke his ego than celebrate American ideals?”

Thursday evening, Joe got his answer.

Despite predictions he would use “Salute to America” for a rally speech, the president shelved partisan politics to recite and celebrate the good things Americans of all colors and creeds are doing, and the great things Americans have done since 1776.

“Together, we are part of one of the greatest stories ever told — the story of America,” said Trump.

It was not a celebration of Trump but of America.

“What a great country!” declared the president. “(F)or Americans nothing is impossible.” Ours is “the most exceptional nation in the history of the world.”

The second half of Trump’s speech was given over to tributes to the five branches of the armed forces — Coast Guard, Air Force, Navy, Marines, Army — with each tribute ending in a display of air power.

The flexing of America’s military muscle had evoked early howls of protest. But the flyovers of F-22s and F-35s, the B-2 stealth bomber and the Ospreys, and the culmination of the aerobatics with the Navy’s Blue Angels, as the Marine Corps band played and all sang the “Battle Hymn of the Republic,” was exhilarating, even moving.

It was positive, uplifting, patriotic. And one imagines that not only Trump’s “deplorables” standing on the Mall loved it.

Still, one wonders: Where is all this negativity, this constant griping and grousing by the left, going to lead? Do these people think America will turn with hope to a party that reflexively recoils at patriotic displays?

Everywhere it seems the left is attacking America’s history and her flawed heroes. Monday, the Charlottesville City Council voted 4-1 to remove April 13, the birthday of Thomas Jefferson, as a paid holiday.

Why? Because our third president was a slave owner. The council’s public comment period featured demonstrators accusing the author of America’s Declaration of Independence with having been a racist and a rapist.

Last week, too, ex-NFL quarterback Colin Kaepernick urged his sponsor, Nike, to pull off the market its new Air Max 1 Quick Strike Fourth of July sneakers featuring Betsy’s Ross’s first American flag on the heel. Says Nike, Kaepernick told the company he finds the colonial flag offensive, as it was flown when slavery was still legal.

Just how far and fast the Democratic Party is moving left became clear last week with some startling findings of a new poll.

Another jolting note: While huge majorities of Americans — 9 in 10 — are extremely proud of the U.S. military and America’s scientific achievements, more than two-thirds of all Americans now say that our political system no longer makes them proud.

This is especially true of Democrats. Only 25 percent, 1 in 4 Democrats, professes to be proud of our political system, our democracy.

A specter of anti-Americanism appears to be rising on the left.

Listening to the Democratic debates, and the depiction of the nation and its economy by the candidates, one would think we were living in the Paris of “Les Miserables” or the London of Charles Dickens.

Demography undeniably favors a millennial-dominant Democratic Party over the middle-aged and seniors party that is the GOP.

Yet how does a party, 3 of 4 of whose adherents profess no pride in its political system, persuade the nation to put it in charge of that system? How does a party, not one-fourth of whom are “extremely proud” to be an American, persuade a majority of Americans to entrust it with the leadership of their nation?

From liberals and progressives, we constantly hear griping, grousing and grievances. When do we hear the gratitude — for America?
Posted by arclein at 12:00 AM