Lincoln and Trump: Two of a Kind? 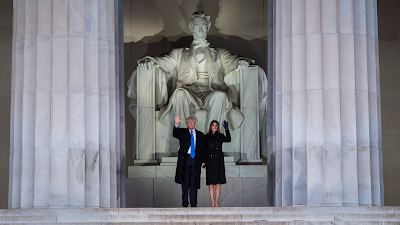 Really.  Both were and are engaged in a real Civil War between a Patriot population and an elite population whose supporters were never restricted geographically. Those clear enemies had to be stripped of influence and ultimately silenced in order for the Patriot class to resecure the integrity of the Republic.

Both were then advised by trusted agents whose task was to do just that.  If necessary, it does lead to the possibility of Martial Law. So far we are doing far better and the opposition has fared poorly.

Recall though today that the problem is also global.  Victory in the USA does not mean victory..

Lincoln and Trump: Two of a Kind?

President Trump has outraged legions of political opponents with his plan to give a Fourth of July speech on the steps of the Lincoln Memorial. A Washington Post columnist frets that Trump’s speech will leave a “stain” that “won’t ever completely wash away.” But before any more teeth-gnashing occurs, we should recognize the surprising parallels between Trump and President Lincoln. Trump sparked an uproar in 2017 by tweeting derisively about the “so-called judge” who blocked his order severely restricting immigration from seven nations. Twitter was not around in the 1860s so Lincoln never took online swipes at the judiciary. However, when Supreme Court Chief Justice Roger Taney ruled in 1861 that Lincoln had no right to suspend habeas corpus along a railroad corridor, Lincoln ignored his decision. The following year, Lincoln greatly expanded the suspension, resulting in the arrest and military trials of people who had done nothing more than insult the president. Up to 15,000 northerners became political prisoners as a result of Lincoln’s orders.

Trump mortifies the press corps and millions of non-ink-stained wretches when he denounces that the media is “the enemy of the American people.” Lincoln refrained from such rude comments during his four years in the White House. However, on May 18, 1864, Lincoln issued an executive order for “arrest and imprisonment of irresponsible newspaper reporters and editors” after the New York World and Journal of Commerce published an incorrect report on a pending expansion of conscription. Lincoln forcibly shut down 300 newspapers in the North that were insufficiently supportive of military policies and hundreds of editors, publishers, and reporters were tossed into prison without charges

Trump has been widely condemned for canceling the Obama administration mandate compelling every public school to allow transgender students to use the bathrooms and locker rooms of their choice. Transgender rights were not an issue in the 1860s, but Lincoln’s treatment of the most reviled ethnic group of his era was not his finest hour. In 1862, Lincoln approved the largest mass execution in American history — 39 Sioux Indians. In 1863, Lincoln approved brutally expelling Navajos and Apaches from the New Mexico territory. In 1864, John Evans, a personal friend of Lincoln’s and his appointee as Colorado territorial governor, launched a military campaign that culminated in the U.S. cavalry slaughtering more than 100 peaceful Indian women and children at Sand Creek, an unprovoked attack that even Congress labeled a “massacre.”

Trump was denounced for his “tyrannical and despotic” attempt to withhold federal funds from self-proclaimed “sanctuary cities” that refuse to cooperate with federal immigration authorities. Rather than sanctuary cities, Lincoln dealt with border states that threatened to secede and he did not rely on sweet words alone. In September 1861, Lincoln sent federal troops to arrest pro-southern members of the Maryland legislature. In Kentucky, Union commanders targeted Southern sympathizers with roving “execution squads,” as the New York Times noted. Vast swaths of southern Missouri were devastated and depopulated to prevent any support for Confederate forces.

Trump suggested in 2016 that the U.S. government could kill the families of terrorists to dissuade others from launching attacks — and to hell with Geneva Conventions rules protecting non-combatants. Lincoln also relied on a catch-all notion of collective guilt. Shortly before his 1864 march across Georgia, Union Gen. William Sherman telegramed Washington that “there is a class of people — men, women, and children — who must be killed or banished before you can hope for peace and order.” Lincoln congratulated Sherman for a ruthless destructive campaign that made “Georgia howl.” After Union Gen. Phil Sheridan torched much of Virginia, Lincoln sent him a message declaring “my own personal admiration and gratitude for the month’s operation in the Shenandoah Valley.” Historians swept Lincoln’s brutal tactics under the rug long before his memorial was consecrated in 1922.

Trump and Lincoln are soulmates on today’s most contentious economic issue. Trump portrays imports as a pox while his trade wars are ravaging American farmers and many manufacturers. Promising high tariffs helped Lincoln capture the presidency in 1860 and he cheered in February 1861 when congressional Republicans boosted tariffs as high as 216%. The New York Times denounced that bill as a “disastrous measure” that “alienates extensive sections of the country we seek to retain” and will “deal a deadly blow … at the measures now in progress to heal our political differences.” That tariff law helped drive Virginia, North Carolina, and Tennessee out of the Union, thereby making the Civil War far more destructive. Protectionism remains as idiotic now as it was 150 years ago but politicians continue to demagogue the issue.

But don’t expect Trump to mention any of these Lincoln debacles (except maybe tariffs) in his July 4th spiel. Trump being Trump, his speech will probably have some howlers and the media’s fact checkers will lustfully throw plenty of penalty flags. But after it is all over, most Americans will remember only the fireworks they saw, the beer they drank, and maybe the hot dogs they chomped that day.
Posted by arclein at 12:00 AM