Dalai Lama: Migrants Must Return to Native Lands — or Europe Could Become Muslim or African 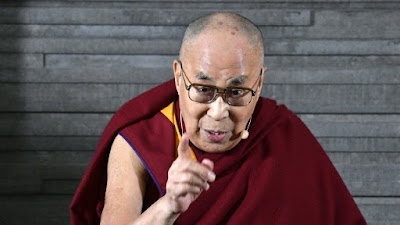 The fundamental problem is the unwillingness to assimilate.  It should automatically prohibit citizenship within a nation state.  We do need to go there world wide in order to preserve cultural integrity for all.

Cultural integrity can be preserved by the creation of national city states whose mandate is to provide direct citizenship rights for members of the characterized nation as opposed to integration into an alien life way.   Thus we can imagine a first nation city state here on the West Coast easy enough although clan differences are real enough.  Such an entity would focus on preserving traditions and languages and all that.  What it does not do is preclude living a full life as a parallel citizen of the greater polity itself.

All this leads naturally to the creation of such entities everywhere we have immigration as an economic necessity.  After all Paris could easily create urban complexes around their North African population who can not assimilate well.


Such a complex can be a ring of residential towers enclosing a communal cultural refuge with ready access to transport that takes residents to jobs inside the greater polity.  Done right, these 'city states' become excellent tourist draws as well.

Now imagine securing Venice by ringing it with a perimeter 'wall' of residential towers that secure and protect the whole lagoon system itself while housing a million folks able to even work in the greater urban area.

What i am sharing is that this type of approach can be wonderfully productive in terms of human and economic well-being..


Dalai Lama: Migrants Must Return to Native Lands — or Europe Could Become Muslim or African


The media aren’t yet describing him as the “far-right Dalai Lama.” Nonetheless, the spiritual leader has again staked out an immigration position placing him right of political leaders tagged with that label, telling the BBC that “‘Europe is for Europeans’ and migrants should be sent back” to their native lands, as the Daily Mail relates it. He also warned that Europe could become “Muslim or African” if they aren’t repatriated.

Of course, one man’s admonishment is another’s aim. French president Emmanuel Macron has actually endorsed the idea of creating “Eurafrica,” a scheme requiring the flooding of his continent with 150 to 200 million Africans during the next few decades.

But in the Dalai Lama’s BBC interview, published Thursday, he warns that this (essentially the destruction of Europe) isn’t a good idea. “He said Europe was under an obligation to take in those who needed help,” writes the Mail, “but ultimately they should be returned to their homelands.”

“The 83-year-old said: ‘European countries should take these refugees and give them education and training, and the aim is — return to their own land with certain skills,’” the paper relates.

Of course, this is just common sense. If you grant an imperiled individual safe haven in your home, the idea is that he’ll leave once the danger has passed; you don’t generally adopt him. Likewise, refugee status is supposed to be temporary, with the foreigners repatriated after the threats in their native lands are gone.

This only changed with the refugee con, the default standard that Third World migrants should stay in the West and eventually become citizens; this scheme is advanced by leftist immigrationists, mind you, who know full well that they’re importing their voters. Just consider the confession Andrew Neather, ex-aide to former British Prime Minister Tony Blair, made in 2009: The previous years’ massive Third World migration into the U.K. was intended, as he put it, “to rub the Right’s nose in diversity and render their arguments out of date.”

Yet while this scheme may feed leftists’ power lust, the Dalai Lama doesn’t believe it’s good even for the migrants. “They themselves, I think [are] better in their own land,” he said. “Better [to] keep Europe for Europeans,” the Mail also tells us.

The octogenarian monk may be particularly sensitive to this issue because he’s a refugee himself, living in India as a result of China’s dominance of his native Tibet. In fact, he’d expressed his common-sense migration views twice last year already. For instance, he said in a September talk in Rotterdam, Netherlands, that the aim is for migrants to “eventually be able to return to rebuild their own countries. That has been my view right from the beginning,” the Mail further relates.

“For example, we Tibetans took shelter in India, but most Tibetans want to return to Tibet when the situation there has changed,” he continued. “Each country has its own culture, language, way of life, and it is better for people to live in their own country.”

Yet there’s something the Dalai Lama hasn’t said, a truth expressed by another refugee, Dr. Mudar Zahran. A leader of the Jordanian Opposition Coalition currently living in the United Kingdom, Zahran stated in a 2015 Glazov Gang interview that most of the Muslim migrants entering Europe were not actually refugees fleeing danger; rather, they were often economic opportunists — and sometimes violent jihadists.

In fact, while a practicing Muslim himself, Zahran warned that the migration represented “the soft Islamic conquest of the West” and, like the Dalai Lama, insisted the migrants be repatriated (video below).

(Note: Ask yourself why you haven’t seen the above in the mainstream media.)

But that it is Islamic (or Third World) demographic conquest has been recognized by others — on “both sides.” For example, Italian archbishop emeritus of Pompeii Carlo Liberati hyperbolically lamented in a January 2017 interview that in “10 years we will all be Muslims because of our stupidity.” Two months later, Turkish president Recep Tayyip Erdoğan expressed demographic-jihadist sentiments and told Turks in Europe, “Have five children, not three. You are Europe’s future.” This was echoed last year by Turkish official Alparslan Kavaklıoğlu, who said at a ruling party affair that the “Muslim population will outnumber the Christian population in Europe.… Europe will be Muslim. We will be effective there, Allah willing. I am sure of that.”

Yet the most striking such pronouncement was uttered by late Libyan leader Muammar Gadhafi. He said in 2006, “We have 50 million Muslims in Europe. There are signs that Allah will grant Islam victory in Europe — without swords, without guns, without conquest — will turn it into a Muslim continent within a few decades.”

When Gadhafi and the Dalai Lama, Mudar and Macron, all agree, perhaps we should take notice. Yet this merely reflects how beyond the immigrationism-indoctrinated West, people instinctively understand that demography is destiny. There, the default is the historical one: to keep unassimilable foreign elements out of your country — not invite them in.

A prime example is Japan, which essentially disallows immigration, considering it bad for the nation. In fact, upon expelling illegal migrants approximately 20 years ago, the Japanese government unabashedly stated (I’m paraphrasing), “Japan is for Japanese. Others arewelcome to come and visit, but they’re expected to return home.”

My, my, it seems they didn’t get the memo that your “strength lies in diversity.”
Posted by arclein at 12:00 AM