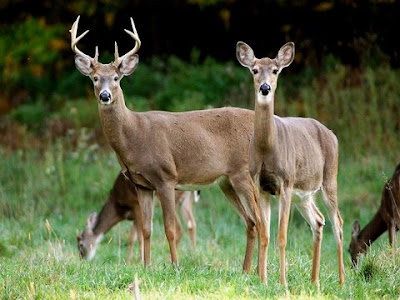 This problem disease is ripping through the wild deer population and will surely spread.  What we clearly lack is a proper understanding of the transmission vector.

Recall bovine transmission of essentially the same type of disease was blamed of the human application of bovine protein powders to the feed supply which a moments thought makes unlikely.  After all the disease needed a natural vector to even exist as a likely disease.  Most likely cannibalism is an adjunct vector.

We certainly need secure testing protocols and we need to understand the real vectors.  So far it appears rare in humanity.  This is most likely because we cook our meats and will continue to do so.  An interesting question is why do carnivores avoid the disease, or is it possible that its slow attack is somehow cut of by the lifespan of a carnivore.   then why do we have rapid development among herbivores?


In response to finding chronic wasting disease in a white-tailed doe in Libby, Montana Fish, Wildlife and Parks is working with local officials and staff from around the state to determine a response.

“We know the residents of Libby and folks around Montana are concerned about this discovery,” said FWP wildlife program manage and regional CWD expert Neil Anderson. “However, CWD is a slow-moving disease and so while we want to be prompt in addressing public concerns, we want to be deliberate in determining how we are going to respond.”

Earlier this week, initial test results from a Libby white-tailed doe came back positive for CWD. Results of a second confirmation test are expected early next week. This is the first time CWD has been detected in the wild, west of the Continental Divide in Montana.

CWD is a progressive, fatal disease affecting the nervous system of mule deer, white-tailed deer, elk and moose. If left unmanaged, it could result in long-term population declines within affected herds.

All the states and provinces that border Montana, other than Idaho and British Columbia, have found CWD in their wild cervids.

Like many wildlife diseases, CWD can spread more quickly where animals are artificially congregated, as is common with deer in towns. It’s unlawful to feed wildlife in Montana, in part, because of the concern about wildlife diseases.

“Libby police officers are also staying vigilant on looking for sick deer in town,” said Libby police chief Scott Kessel. “If people have a current sighting of a sick or injured deer, they can contact dispatch at 293-4112 extension 0.” FWP is working closely with Libby police and other local government officials.

For people in the Libby area who have general information on sightings of sick deer, please call the hotline set up by FWP at 291-6539 and leave a message with your name, number, the location of the animal and the time you saw it.

While there’s no evidence CWD can infect humans, the Centers for Disease Control recommend not consuming meat from an animal that tests positive for CWD. The CDC also recommends testing deer, elk and moose harvested from CWD-positive areas for the disease prior to consuming.

CWD is part of a group of diseases called Transmissible Spongiform Encephalopathies (TSEs). TSEs are caused by infectious, mis-folded prion proteins, which cause normal prion proteins throughout a healthy animal’s body to mis-fold, resulting in organ damage and eventual death.

CWD was first found in wild deer in Montana in October 2017. To date, CWD has been detected in Carbon, Liberty, Hill, Blaine, Phillips, Valley, Daniels, and Sheridan counties. To prevent the spread of CWD within Montana, FWP establishes CWD Management Zones in areas where CWD has been found. Whole carcass, whole head or spinal column from any deer, elk, or moose harvested cannot be removed from these zones unless the animal has tested negative for CWD.

For more information about CWD in Montana, visit fwp.mt.gov and click on Chronic Wasting Disease Management.
Posted by arclein at 12:00 AM