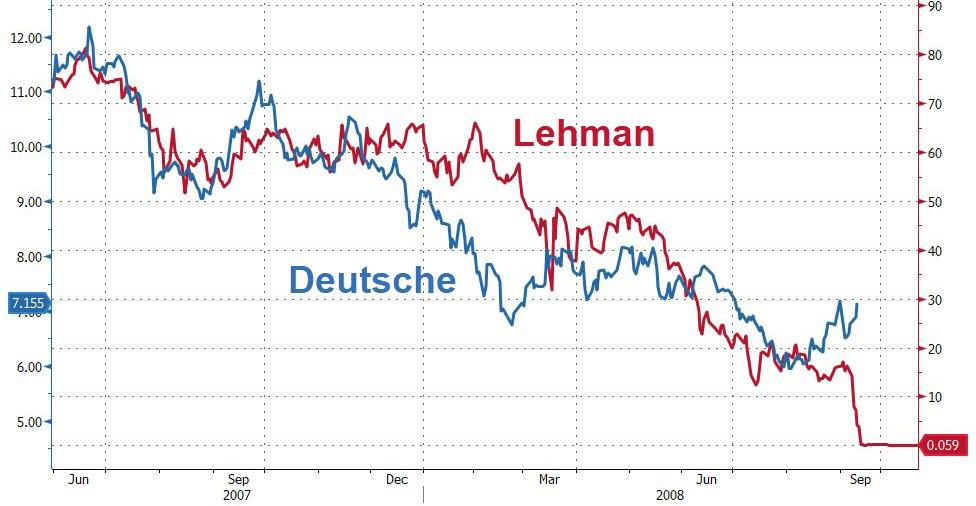 This has been going on for literally months and it will need a huge round of  'quantitative easing' to properly halt.  That means that the EU must print money.  Or perhaps the US fed which will certainly allow Trump to take it over.

Do not think that this is going to catch the Trump administration by surprise. It is not and in fact it has been waited for as it allows many other changes to take place in terms of a well planned transition.

Most likely DB's book is actually all right once you provide it liquidity over say five years to allow the book to properly age.  What we are seeing is a contraction of the massive global hedge fund book to reflect a tightening environment brought on by the real confrontation with the CCP which also must age properly before resolution.

It is our extraordinary good luck that we have the Trump administration.  Do not think for a second that he does not understand this and knows his options and will not allow this developing situation to be plundered by Wall Street.  .

There is a reason James Simons' RenTec is the world's best performing hedge fund - it spots trends (even if they are glaringly obvious) well ahead of almost everyone else, and certainly long before the consensus.

That's what happened with Deutsche Bank, when as we reported two weeks ago, the quant fund pulled its cash from Deutsche Bank as a result of soaring counterparty risk, just days before the full - and to many, devastating - extent of the German lender's historic restructuring was disclosed, and would result in a bank that is radically different from what Deutsche Bank was previously (see "The Deutsche Bank As You Know It Is No More").

In any case, now that RenTec is long gone, and questions about the viability of Deutsche Bank are swirling - yes, it won't be insolvent overnight, but like the world's biggest melting ice cube, there is simply no equity value there any more - everyone else has decided to cut their counterparty risk with the bank with the €45 trillion in derivatives, and according to Bloomberg Deutsche Bank clients, mostly hedge funds, have started a "bank run" which has culminated with about $1 billion per day being pulled from the bank.

As a result of the modern version of this "bank run", where it's not depositors but counterparties that are pulling their liquid exposure from DB on fears another Lehman-style lock up could freeze their funds indefinitely, Deutsche Bank is considering how to transfer some €150 billion ($168 billion) of balances held in it prime-brokerage unit - along with technology and potentially hundreds of staff - to French banking giant BNP Paribas.


One problem, as Bloomberg notes, is that such a forced attempt to change prime-broker counterparties, would be like herding cats, as the clients had already decided they have no intention of sticking with Deutsche Bank, and would certainly prefer to pick their own PB counterparty than be assigned one by the Frankfurt-based bank. Alas, the problem for DB is that with the bank run accelerating, pressure on the bank to complete a deal soon is soaring.

Here are the dynamics in a nutshell, (via Bloomberg): Deutsche Bank CEO Christian Sewing is pulling back from catering to risky hedge-fund clients, i.e. running a prime brokerage, as he attempts to radically overhaul the troubled German lender while BNP CEO Jean-Laurent Bonnafe wants to expand in the industry. A deal of this magnitude would be a stark example of the German firm’s retreat from global investment banking while potentially transforming its French rival from a small player in the so-called prime-brokerage industry to one of Europe’s biggest.

Of course, publicly telegraphing that DB is in dire liquidity straits and needs an in-kind transfer of its prime brokerage book would spark an outright panic, and so instead the story has been spun far more palatably, i.e., "BNP is providing “continuity of service” to Deutsche Bank’s prime-brokerage and electronic-equity clients as the two companies discuss transferring over technology and staff", according to a July 7 statement. The ultimate goal of the talks is for BNP to take over the vast majority of client balances, which are slightly less than $200 billion currently.

There is just one problem: nothing is preventing those clients who would be forcibly moved from a German banking giant to a French banking giant from redeeming their funds. And that's just what they are doing. Or rather, nothing is preventing them from moving their exposure for now, which is why they are suddenly scrambling to do it before they are suddenly gated.

Which is why the final shape of the deal remains, pardon the pun, fluid, and it is unclear how it will proceed, facing a multitude of complexities, including departing clients.

In an attempt to stop the bank run, BNP executives are meeting with U.S. hedge-fund clients this week to convince them to stay following similar sit-downs with European funds last week, Bloomberg sources said.

However, if this gambit fails, and hedge funds keep moving their business elsewhere, officials at the German bank may just relegate its assets tied to the prime finance division into the newly formed Capital Release Unit, i.e. the infamous "bad bank" which is winding down unwanted assets totaling 288 billion euros ($324 billion) of leverage exposure, and the prime brokerage is responsible for much of the 170 billion euros of leverage exposure that’s coming from the equities division into the division, also known as CRU a presentation shows. 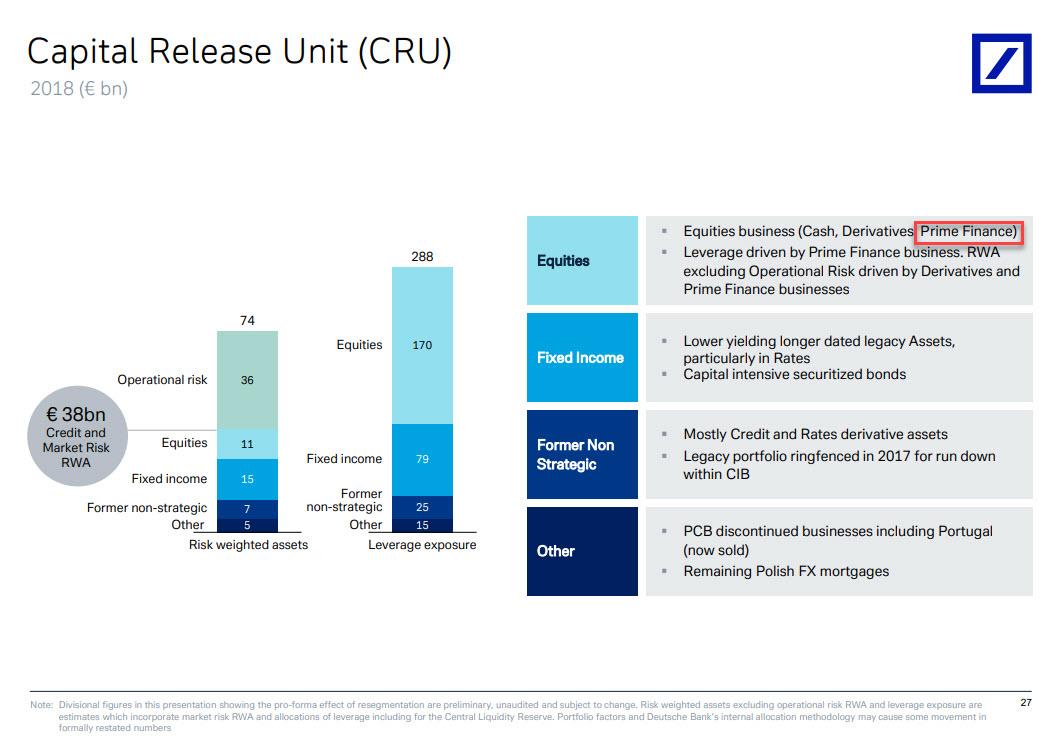 It also means that countless hedge funds are suddenly at risk of being gated on whatever liquid exposure they have toward Deutsche Bank.

To be sure, Deutsche Bank’s hedge fund balances have been declining throughout the year as speculation swirled around Sewing’s intentions for the prime brokerage, but the rate of redemptions was far lower than $1 billion per day. Now that the bank jog has become a bank run, the next question is how much liquidity reserves does DB really have and what happen if hedge funds clients - suddenly spooked they will be the last bagholders standing - pull the remaining €150 billion all at once.

We are confident we will get the answer in a few days if not hours, until then please enjoy this chart which compares DB's stock decline to that of another bank which was gripped by a historic liquidity run in its last days too...