How a PTSD expert developed a viable cure for heartbreak 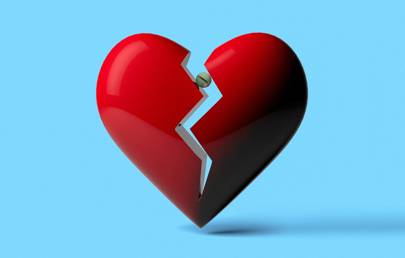 This also explains why CBDs help PTSD as well.  The drug softens the re building of the bad  memory.  Again this is good news and can be used to obviate all forms of psychological trauma.

Most therapies working with the brain do turn out to be gentle and rather simple as well.  This is both and very uncomplicated.

It is also a thing that can be identified and done by the victim easily enough with or without a professional.  After all you do need to still sit down and write out the pain producing narrative.  After that is done, you merely take the med and then read out what you wrote.  Then do again a week or so later. and repeat until the problem is fully neutralized.

This actually replicates what ultimately happens anyway, but speeds it up a lot.

.
How a PTSD expert developed a viable cure for heartbreak

Some break-ups hurt more than others. But a new therapy could do away with emotional pain
By Pauline Bock
Wednesday 26 June 2019

Everyone will experience heartbreak during their lives, but some break-ups are more serious than others. For example, discovering that your long-term partner is leading a double life can cause severe trauma. To counter that, Alain Brunet, a psychologist who has studied PTSD for decades, has developed a therapy to heal what he calls “romantic betrayal”.

In his lab at McGill University in Montréal, Canada, Brunet studies victims of “romantic betrayals” using reconsolidation therapy, a method combining medical treatment and therapy sessions. And it works: 70 to 84 per cent of the participants in a study Brunet concluded in November 2018 have experienced relief following their post-break-up stress.

“We don’t treat the symptoms, we treat the memory,” Brunet says – which sounds somewhat like Eternal Sunshine of the Spotless Mind, the film in which a heartbroken character played by Jim Carrey undergoes experimental therapy to erase his memories of a relationship after it ends. Brunet says his method is even better than fiction: “Because you don’t forget your memory – who would want to forget their love story?” Instead, the therapy “re-consolidates” the memory by removing the trauma from it.

An hour before a therapy session, the patient is given a dose – between 50mg and 80mg – of a beta-blocker called propranolol, and is asked to write a summary of the traumatic experience, following a strict format: a first-person text in the present tense that describes at least five physical sensations felt at the time of the event. By reading the summary out loud, the patient “reactivates” the memory, and does so over four to six weekly session, under the influence of propranolol. At every reading, the memory is “recorded again” while the drug suppresses the pain it contains. By the end of the therapy, patients tell Brunet that skimming through the text feels like “reading a novel” – the story is there, but the pain is gone. Brunet stresses that, if not complemented by therapy, propranolol is ineffective. “The pill or the session alone will not work,” he says.

Brunet originally developed reconsolidation therapy to help survivors of violent attacks recover from PTSD. He was studying psychology at Montréal University in 1989, when a fellow student shot 14 people on campus. Brunet wasn’t present at the scene, but he helped to deliver psychological care to survivors – an experience that deeply marked him, he says. In November 2015, after years of research, Brunet had just received conclusive results on the efficacy of reconsolidation therapy when Paris was shaken by a series of terror attacks that claimed 130 lives. He set up Paris MEM, a programme geared towards volunteer survivors struggling with trauma, where he applied his therapy for the first time. Brunet trained 200 doctors in 20 hospitals across France, and so far 400 patients have been treated.

On heartbroken patients, Brunet says, his therapy “works admirably well, even better than on patients with PTSD”. His study focused on 60 people aged from 30 to 60 who had suffered a grave romantic betrayal, such as being harassed by a former partner or being abandoned overnight. Healing that type of traumas can be as difficult as treating violence-induced PTSD, Brunet says: “Greek tragedies have been written about it. It’s not a banal incident. People often cite a breakup or a divorce as their worst life experience.”

His reconsolidation therapy could be applied to other pathologies stemming from painful memories: prolonged grief, event-based phobias (such as a people becoming terrorised of dogs after being bitten), even some eating disorders or bouts of depression, if they can be sourced from a precise memory. “This will change psychiatry care,” he says.

Yet Brunet is struggling to commercialise his method; the pharmaceutical industry has shown no interest, as propranolol is no longer patented. Instead, he’s giving talks and training doctors in France and in Canada, and is planning a new study in his Montréal lab to further improve the therapy protocol. Brunet is certain of one thing: “People don’t really want to erase their memory. They just want to move on.”
Posted by arclein at 12:00 AM