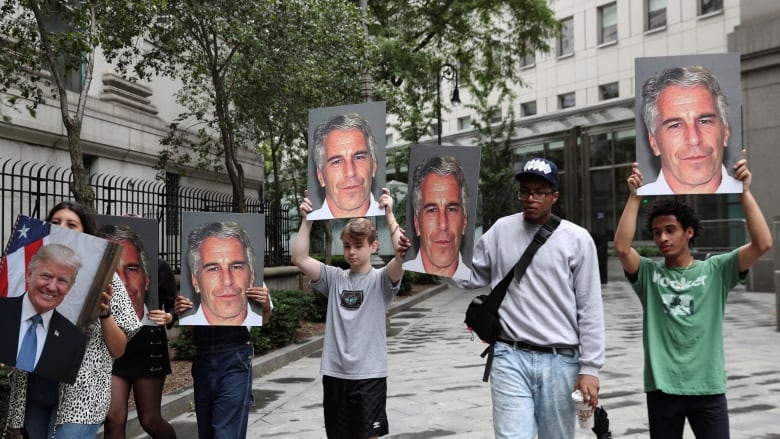 This particular individual fits into that cast of characters thrown up by the old Aristocracy before the advent of the French Revolution and known then as libertines.  Its most famous proponent was the Marquis De Sade whose writings make anyone cringe.  The trouble here is that underlying all this is the outright killing of victims to eliminate inconvenient witnesses.

Not proven of course, but the reports are certainly out there.

Understand also that there will be no political fix anymore.  The MSM has been caught out on this and can not intervene, simply because they took the bait and told the story in an attempt to smear Trump.  Now we see the real investigation pop up that has been underway for three years.


Eleven years after Jeffrey Epstein agreed to a once-secret plea deal, U.S. federal prosecutors took another run at putting Epstein behind bars on sex charges, accusing him Monday of abusing dozens of underage girls as young as 14.

Epstein, arrested over the weekend, was brought to federal court in Manhattan on Monday afternoon, and pleaded not guilty to sex-trafficking charges.

He was ordered jailed at least until a bail hearing Thursday after prosecutors say Epstein, a registered sex offender, is a significant flight risk. They say he has three active U.S. passports and has frequently traveled in and out of the country on his private jet.

Epstein — a 66-year-old hedge fund manager who once hobnobbed with some of the world's most powerful people — was charged in an indictment unsealed Monday with sex trafficking and conspiracy and could get up to 45 years in prison.

A former U.S. federal prosecutor discusses the charges against Epstein: Former U.S. federal prosecutor Roland Riopelle believes the new charges brought against Jeffrey Epstein by the Department of Justice are to compensate for the 'improperly light' sentence imposed on Epstein previously in Florida. 7:42

"Epstein intentionally sought out minors and knew that many of his victims were in fact under the age of 18," the federal indictment filed in the Southern District of New York alleged.

"The alleged behaviour shocks the conscience," Geoffrey Berman, U.S. attorney for the district, said at a subsequent news conference.

Prosecutors said several alleged victims have come forward since Epstein's arrest. Epstein's lawyers argued the matter had been settled in a Florida case involving similar charges a decade ago.

Court documents unsealed in New York indicate Epstein is charged with creating and maintaining a network that allowed him to sexually exploit underage girls.

Dozens of girls were exploited, Bill Sweeney from the FBI New York office said, and the girls were allegedly paid hundreds of dollars per encounter.

At least two minors were sexually abused over a period of years, it is alleged. Both Berman and Sweeney encouraged other potential victims to contact authorities.

'Basically a life sentence'Berman said prosecutors would oppose his release on bail.

"He has enormous wealth. The charges are very serious and carry with them a maximum sentence of 45 years, which to someone of Epstein's age is basically a life sentence," Berman said, "so we think he has every incentive to try and flee the jurisdiction."

Prosecutors allege Epstein was aware many of the victims were under age, and he encouraged them to supply him with more girls.

"This allowed Epstein to create an ever-expanding web of new victims," said Berman.

Prosecutors said the evidence included a "vast trove" of hundreds or even thousands of lewd photographs of young women or girls, discovered in a search of his New York mansion after his arrest.

They plan to seek the forfeiture of his seven-storey, 21,000-square-foot townhouse less than a block from Central Park.


A task force of federal agents and New York City police officers met the plane at Teterboro Airport and took Epstein into custody.

"He flew into the jurisdiction and so we arrested him," said Berman.

"I urge you not to read anything into that one way or the other," he said.


Epstein's arrest, first reported by the Daily Beast, came amid increased scrutiny of the 2008 non-prosecution deal that allowed Epstein to plead guilty to lesser state charges while maintaining a jet-set lifestyle, which includes homes in Paris and the U.S. Virgin Islands and a Bentley.


Deal overseen by Trump cabinet member
Under the deal, overseen by former Miami U.S. attorney and current Trump Labour Secretary Alex Acosta, Epstein avoided a possible life sentence and served 13 months in jail after pleading guilty to Florida charges of soliciting and procuring a person under age 18 for prostitution. It also required he reach financial settlements with dozens of his victims and register as a sex offender.

Acosta has defended the plea deal as appropriate under the circumstances, although the White House said in February it was "looking into" his handling of it.

The deal, examined in detail in a series of reports in the Miami Herald, is being challenged in Florida Federal Court.


U.S. District Judge Kenneth Marra of Florida ruled earlier this year that Epstein's victims should have been consulted under federal law about the deal, and he is now weighing whether to invalidate it.

Trump told reporters in February he had little knowledge of the reports in the Herald.

Several years earlier, in 2002, Trump told New York magazine that he had known Epstein for 15 years at that point.

"Terrific guy. He's a lot of fun to be with," Trump was reported to have said. "It is even said that he likes beautiful women as much as I do, and many of them are on the younger side. No doubt about it — Jeffrey enjoys his social life."

"The past cannot be undone; the government committed itself to the NPA, and the parties have not disputed that Epstein complied with its provisions," prosecutors wrote in the filing.

They acknowledged, however, that the failure to consult victims "fell short of the government's dedication to serve victims to the best of its ability" and prosecutors "should have communicated with the victims in a straightforward and transparent way."

There are also no double-jeopardy implications because Epstein's guilty plea involved only state crimes, while the current case involves federal law.

According to court records in Florida, authorities say at least 40 underage girls were brought into Epstein's Palm Beach mansion for what turned into sexual encounters after female fixers looked for suitable girls locally and in Eastern Europe and other parts of the world.

Some girls were also allegedly brought to Epstein's homes in New Mexico and a private Caribbean island, according to court documents.

It wasn't immediately clear whether the Florida case and the new charges involved the same victims, since nearly all have remained anonymous.
Posted by arclein at 12:00 AM