How important will blockchain be to the world's economy? 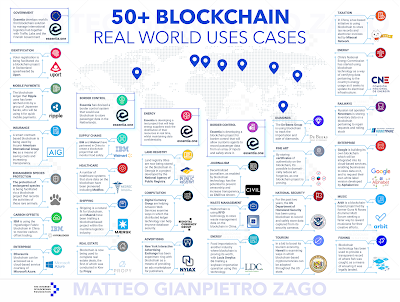 First off, it applies to all potential economic transactions globally.  It eliminates the whole back room cost structure we are all familiar with and does so globally.  That means it will become possible to buy a property in any country and have it all settle without fuss.

With those costs evaporating, the demand for blockchain will make it all inevitable.

This will be the new global standard for transnational security in business transactions.  So it is incredibly important.  It still takes a lot of market conditioning for folks tio become comfortable. .
.
How important will blockchain be to the world's economy?

The Long Island Iced Tea Company, as its name suggests, was in the business of selling beverages. And not as many as it might have liked: it lost nearly $4m (£3.2m) in the third quarter of 2017.

Then the company announced that it would henceforth be known as the Long Blockchain Corporation. Would it stop selling beverages? No. Would it sell beverages using blockchain? Maybe. It would do something to do with blockchain. Maybe. Probably.

The details were hazy, but that did not stop investors getting excited.

What is blockchain? And what does it have to do with Long Island Iced Tea?

Blockchain is the technology which underpins Bitcoin and other digital currencies. It is a database of financial transactions which is saved on multiple computers and which constantly grows as new transactions or "blocks" are added to it, forming a continuous and public chain of data.

Blockchain may still be in its infancy, but venture capitalists are already pouring billions into start-ups with more clearly defined plans than the Long Island Iced Tea Company's. Even Facebook is getting involved.

And billions more are being raised in the regulatory grey area of initial coin offerings, where companies raise money by selling digital currency to investors.

Enthusiasts say blockchain could become as disruptive as the internet, comparing the technology to the World Wide Web in the 1990s. At that time, many people were clear it would become important - but few really understood it, or foresaw its potential and limitations.

So what problem is blockchain trying to solve, and should we believe the hype?

50 Things That Made the Modern Economy highlights the inventions, ideas and innovations that helped create the economic world.

It is broadcast on the BBC World Service. You can find more information about the programme's sources and listen to all the episodes online or subscribe to the programme podcast.

Let's start with a deceptively simple question: what stops me from spending the same money twice?
When money meant physical tokens, it was easy. I can't give the same one to two different people. But long ago we realised that lugging coins around is no way to run an economy. It is easier to trust third parties to keep records of who has got what.

You give me goods, and I instruct the record keepers to shuffle their numbers accordingly.

How do you know I have not given the same money to someone else? You trust the bank, or MasterCard, or PayPal, to guarantee that cannot happen - because their systems will not allow it.

But there can be drawbacks.

It can make these intermediaries very powerful. If they fail, the whole system collapses.

What if we didn't need them? What if the financial records which lubricate the global economy could somehow be communally owned and maintained?

In 2008, someone using the pseudonym Satoshi Nakamoto proposed a new kind of money: Bitcoin.

Transactions would be verified not by a trusted third party like a bank or credit card provider, but by a network of computers solving cryptographic puzzles.

And as long as enough people chipped in computing power to check the solution, nobody would be able to fake the records or carry out fraudulent transactions. And individuals were incentivised to donate that power by the promise of Bitcoin rewards.

It was ingenious. And people soon wondered whether blockchain, the technology making all this possible, could do more. It offered a completely new way for strangers to collaborate without needing to trust a centralised authority. We started to hear phrases like "transform everything" and "change the world".

In theory, blockchain could help lower the costs of verifying transactions and creating new markets, whenever we trust a person or company to manage our information in ways which help us interact

What are Facebook, Uber and Amazon, for example, if not databases which use our information to help us interact? Might blockchain one day build new online models where we own our data, or perhaps sell our attention directly? Some think so.

Others are working on blockchains to track goods through supply chains, or intellectual property in the digital world; to make contracts quicker to administer, or voting systems more secure. You name it, somebody somewhere will be trying to put it on a blockchain.

But let's be honest: most of us do not understand the nuts and bolts of these ideas. And even if we do, we cannot confidently envisage how they will play out in reality.

Predictably, the combination of intense buzz and hard-to-grasp technology has meant some people have not thought as critically as perhaps they should.

Like those who rushed to buy shares in a loss-making drinks company when it puts the word "blockchain" in its name. Or who bid up the total value of "DogeCoin" - a joke Bitcoin rival - to more than $2bn.
Or who sank $660m into something called Pincoin, seemingly based on little more than a glitzy website. The people behind Pincoin appear to have taken the money and vanished.
Just how excited should blockchain make us?

The economist Tyler Cowen is cautious: he reckons "scepticism is more plausible than enthusiasm" - for now, at least. One reason: blockchains can be slow and power-hungry.

Bitcoin, for example, chugs through three or four transactions a second. Visa averages 1,600. To validate these transactions, the computers solving Bitcoin's cryptographic puzzles consume, by one estimate, about as much electricity as Ireland.

Some dispute the significance of these figures, but the technological challenge of scaling blockchains seems real. So is the problem of marrying data to real world humans.

One of Bitcoin's attractions is that your wallet is not linked to your real identity - especially if you are using it to purchase dodgy stuff. But if we want to use blockchains to store medical records, we have to be certain that they cannot get attached to the wrong patient.

In removing the need for intermediaries, blockchains may sometimes remind us why their services can be worth paying for.

Intermediaries can fix mistakes. Your bank can send a replacement internet banking login. Lose the passcode to your Bitcoin wallet, and you can kiss your currency goodbye.

They can also resolve disputes. How best to do that with blockchain "smart contracts" is most kindly described as an evolving conversation.

And trust in an intermediary has to be replaced by trust in other things - that software is reliable, and that incentive structures will not break down in unexpected circumstances.

But assessing software is hard. The Decentralized Autonomous Organization, a pioneering investment fund on the Ethereum blockchain, raised $150m before someone hacked it, and stole $50m.

The economist Eric Budish suggests there are limits to how valuable Bitcoin can become before the incentives to attack it outweigh the incentives that currently keep attackers at bay.

But it is only a decade since blockchain was invented. Should we not expect some wrong moves and false starts before we figure out what it is good for?

When the World Wide Web was a similar age, it was certainly better established and further advanced - but investors were still pouring money into Webvan, Flooz and Pets.com, as well as eventual successes like Amazon.

It shouldn't surprise us that shares in the Long Blockchain Corporation promptly crashed by 96%.
But nor should it make us too cynical about what might one day be possible.

The author writes the Financial Times's Undercover Economist column. 50 Things That Made the Modern Economy is broadcast on the BBC World Service. You can find more information about the programme's sources and listen to all the episodes online or subscribe to the programme podcast.