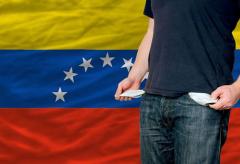 What is stated here about European economic  history sounds almost convincing, but is nonsense.  Populations expand because they are first able to properly feed themselves on a continuing basis.  The rest is noise.  Technical improvement will supply incremental productivity improvement, but is not that powerful a signal.

Europe discovered the potato.  This plus the dairy culture allowed population expansion.

Socialism's contribution is to eliminate access to credit which induces subsistence operations to no ones satisfaction.  It also collapses the whole national credit system and eliminates the market for government internal finance.  Once that is done, the central government is actually almost powerless in implementing any form of capital expansion that can produce new wealth and jobs...
.
Socialism: A Man-Made Malthusian Trap


Despite significant economic progress since ancient times, most people in agrarian societies continued to live at the subsistence minimum until modern times. By the nineteenth century, it was said that these societies fell into a "Malthusian trap." The Malthusian trap describes a situation that keeps population growth in line with available resources. The increase in income per person was not sustainable in the long run, as economic growth was inevitably consumed by population increases.

Western European countries, however, managed to escape the Malthusian trap through the Industrial Revolution which accelerated in the nineteenth century. Escaping the Malthusian trap meant an increase in both population growth and economic prosperity for the vast majority of people. For example, Europe’s population more than doubled between 1800 and 1900, but the decline of living standards no longer accompanied this growth as it had in pre-industrial societies. Economic historians explained that the phenomenon resulted from technological advances, demographic shifts due to European marriage patterns (marrying in later years, establishing a separate household, having fewer children), and increased human intelligence. All of the above are supposed to secure the systematic excess of output growth rates over the overpopulation growth rate. It seems that one crucial factor needs to be added to the list: capitalism itself, where economic laws are fully unfolded and have maximum manifestation and impact on society. Humanity entered a capitalist mode of production, which became possible by limiting absolutism and intrusion into the economy, creating democratic institutions, and improving human rights, law supremacy, and its uniform application.


The ideal market economy emerges in the society that is described as a collection of numerous self-governing producers that meet multiple independent consumers and freely exchange commodities and services according to the rates established on the market by the equilibrium between supply and demand. People behave according to the rules and freely exercise their right to enter a business transaction or refuse to participate. Such a society is characterized by the primacy of private property, an extensive division of labor and cooperation, and rich assortments of commodities and services. Economic freedom was accompanied by a high degree of personal freedom. The closest social formation of this ideal happened to be capitalism at the times of classical liberals in the course of the beginning stages of the Industrial Revolution.

Thus, we already see the following pattern: In the societies of hunter-gatherers, economic laws had minimal manifestation but the most prolonged influence (more than 150,000 years). The agricultural revolution created more stable and secure communities, but they were characterized by a lack of capital the lead to low use of more productive factors of production. Low levels of personal economic freedom also inhibited growth and productivity. Industrialization, on the other hand, offered an escape.

But the escape is not always permanent. Socialist governments often act to undo the benefits of insutrialization and capitalism. Historically, socialist regimes have tried to suppress or override the natural operation of personal choice and capital accumulation in economiees. Socialism, in general, encroaches on private property rights, controls the economy, and subordinates individual decision-making to the collective. In this regard, it is appropriate to assume that socialism would push society back toward the Malthusian trap.


Let us examine this hypothesis in light of the case of Venezuela. Venezuela escaped the Malthusian trap only in the thirties of the last century, judging by the GDP output per capita (Figure 1). +
According to scholars, in the period from the 1920s to the 1940s, the average annual growth rate was more than 10 percent. Indeed, in order to escape the gravity of the trap, an economy needs a high magnitude of acceleration. Now it is hard to believe, but in 1950 , the country ranked fourth in the world in terms of GDP per capita. Unfortunately, as soon as Venezuela established itself as a powerhouse of South America, the government started to implement economic policies from the cookbooks of socialism. Undoubtedly, the country fell prey to the Soviet Union’s influences on Latin America during the Cold War. The main assault was directed on private property rights in the industry and in agriculture. In the late 1950s, the government nationalized the telephone company and founded state-owned metallurgical plants and petrochemical and oil corporations. The authority initiated the agrarian reform whereby the state practically expropriated lands from large landowners and redistributed it among new farmers. Despite the continuing economic growth, the Venezuelan economy was poisoned by the venom of socialism. By the 1970s, Venezuela was a mixed economy with a significant share of state-owned enterprises in the most valuable sectors, which were controlled by a central planning agency. Every new government doubled down on implementing socialist measures as a way to solve the socio-economic issues facing society. It was a continuous trend of nationalization of industries, control of prices and minimum wage, unionization, the imposition of new taxes, and administration of exchange and interest rates. 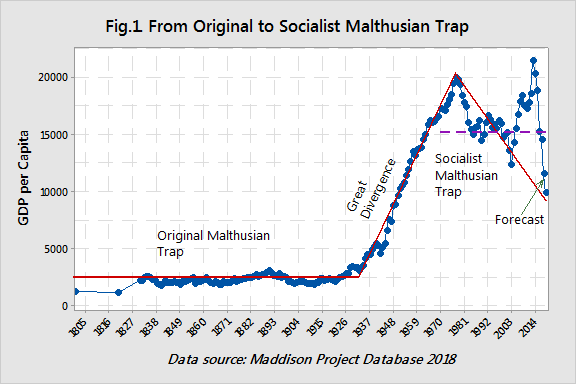 The high revenue from the oil boom fueled the economy; however, the government went on an enormous spending spree. People and the remaining business became live out of the state generosity rather than creating wealth themselves. By 1980, the economic growth stalled, and in the next decade, Venezuela’s economy experienced stagnation. Partial liberal reforms undertaken by the government in conjunction with IMF could not divert an unfavorable trend. Several fruitful years in the mid-2000s, due to a super profit from unprecedented prices for petroleum products, was the last breath before the economy went for a nosedive after the market correction. The economy was exhibiting negative growth, hyperinflation, extreme impoverishment of the population, the deficit of basic food and consumer products. How can one explain such unfortunate events? Socialism adversely affects personal and economic freedoms—the essential components of socio-economic systems that are subject to universal and natural economic laws. The implementation of socialistic measures inhibited the natural flow of market forces in the official economic sphere and funneled them to the shadow . 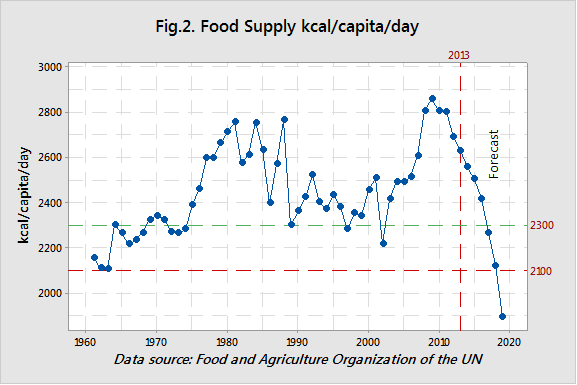 Venezuela has fallen into the man-made socialist Malthusian trap. The socialist Malthusian trap is a condition of politico-economic zugzwang when every consecutive move leads to an even worse situation. Whatever the government does in the framework of the socialist way of thinking will have an accumulating negative effect on people’s well being. Venezuela entered the territory of a humanitarian crisis, which manifested itself in widespread hunger and weakened health care.
Gregory Clark’s “A Farewell to Alms: A Brief Economic History of the World” determined the average daily energy intake from food per capita of about 2,300 or less, as is typical for those social systems that did not escape the Malthusian trap. At the same time, WHO established 2,100 kcal/capita/day as a minimum daily norm. Figure 2 shows that even during the years of stable GDP growth in 1960–1970, Venezuelans experienced food supply problems. This may be evidence of a socialist agricultural reform in the late 50s. Also, the inability to feed their people is a common feature of all socialist regimes. The country was counting on food imports, and when the price of oil was high, food consumption increased. In the socialistic Malthusian trap, people faced acute hunger. The recent study revealed that Venezuelans lost an average of 24 lbs in body weight in 2017.
Therefore, both indexes show that socialism drove the country into the Malthusian trap. In contrast to the original trap that all societies used to experience in their history, the socialistic Malthusian trap is human-made. The economic misery was not caused by full-scale warfare or a natural disaster of biblical proportions. Instead, Venezuela had all the ingredients for success, which pre-industrial society was lacking, but stepped into the uncharted territory of socialism and lost the bet.

Socialism, as a regime of willful ignorance of fundamental economic laws and economic illiteracy, drives society back into the Malthusian trap. Venezuela is a vivid and unfortunate example of the implementing of the socialist idea in modern times. The way out of the trap is a full restoration of economic and individual freedoms that guarantee fundamental laws of the economy to unfold freely to people’s advantage.
Posted by arclein at 12:00 AM