Towards A New Understanding Of Dark Matter 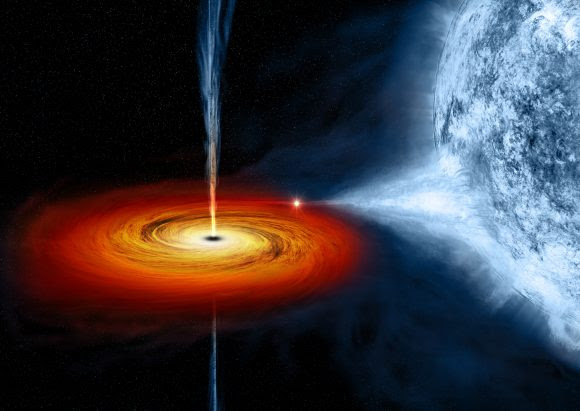 As i have posted, my cloud cosmology posits a particle of creation for lack of a better idea that is foundational to the creation of the universe and is also produced continuously everywhere.  It is so small though that its effect is short range.  Yet it has the strongest gravitational effect compared to larger particles.   More relevant however is that when we do step up to electron scale we have a structured fluid that is not compressible.  It is also effectively neutral in terms of charge.  At least one model implies this and simulation could produce interesting variations.  For that reason we have been unable to detect it.

what i am suggesting is that this 'fluid' is the principle source of almost all observable gravity and that at our scale third tier matter acts like a wave guide.  We have actually driven dark matter out of a bucket of water and altered the weight.

With three tiers of matter we have a very simple physics to work with.  Generally i have been ignoring the ramifications of the first tier in this blog because they are actually mind blowing.  However the second and third tier are actually straight forward and will turn out to be easily worked with.

And we already know that the US military began manipulating gravity mid fifties.  It merely demands a specific type of radiation and plenty of it.

This can be taught at high school and the underlying mathematics can also be introduced as it is a simple extension of theorems taught...

Towards A New  Understanding Of Dark Matter

Dark matter remains largely mysterious, but astrophysicists keep trying to crack open that mystery. Last year’s discovery of gravity waves by the Laser Interferometer Gravitational Wave Observatory (LIGO) may have opened up a new window into the dark matter mystery. Enter what are known as ‘primordial black holes.’

Theorists have predicted the existence of particles called Weakly Interacting Massive Particles (WIMPS). These WIMPs could be what dark matter is made of. But the problem is, there’s no experimental evidence to back it up. The mystery of dark matter is still an open case file.

When LIGO detected gravitational waves last year, it renewed interest in another theory attempting to explain dark matter. That theory says that dark matter could actually be in the form of Primordial Black Holes (PBHs), not the aforementioned WIMPS.

Unlike stellar black holes, primordial black holes originated in high density fluctuations of matter during the first moments of the Universe. They can be much larger, or smaller, than stellar black holes. PBHs could be as small as asteroids or as large as 30 solar masses, even larger. They could also be more abundant, because they don’t require a large mass star to form.

When two of these PBHs larger than about 30 solar masses merge together, they would create the gravitational waves detected by LIGO. The theory says that these primordial black holes would be found in the halos of galaxies.

If there are enough of these intermediate sized PBHs in galactic halos, they would have an effect on light from distant quasars as it passes through the halo. This effect is called ‘micro-lensing’. The micro-lensing would concentrate the light and make the quasars appear brighter. 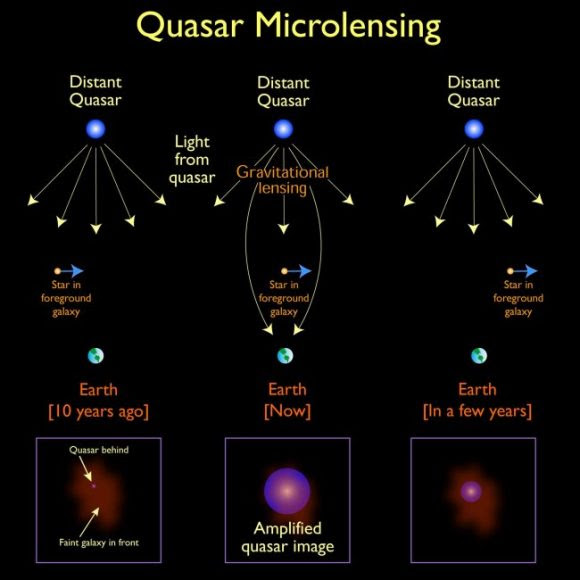 A depiction of quasar microlensing. The microlensing object in the foreground galaxy could be a star (as depicted), a primordial black hole, or any other compact object. Credit: NASA/Jason Cowan (Astronomy Technology Center).

The effect of this micro-lensing would be stronger the more mass a PBH has, or the more abundant the PBHs are in the galactic halo. We can’t see the black holes themselves, of course, but we can see the increased brightness of the quasars.

Working with this assumption, a team of astronomers at the Instituto de Astrofísica de Canarias examined the micro-lensing effect on quasars to estimate the numbers of primordial black holes of intermediate mass in galaxies.

“The black holes whose merging was detected by LIGO were probably formed by the collapse of stars, and were not primordial black holes.” -Evencio Mediavilla

The study looked at 24 quasars that are gravitationally lensed, and the results show that it is normal stars like our Sun that cause the micro-lensing effect on distant quasars. That rules out the existence of a large population of PBHs in the galactic halo. “This study implies “says Evencio Mediavilla, “that it is not at all probable that black holes with masses between 10 and 100 times the mass of the Sun make up a significant fraction of the dark matter”. For that reason the black holes whose merging was detected by LIGO were probably formed by the collapse of stars, and were not primordial black holes”.

Depending on you perspective, that either answers some of our questions about dark matter, or only deepens the mystery.

We may have to wait a long time before we know exactly what dark matter is. But the new telescopes being built around the world, like the European Extremely Large Telescope, the Giant Magellan Telescope, and the Large Synoptic Survey Telescope, promise to deepen our understanding of how dark matter behaves, and how it shapes the Universe.

It’s only a matter of time before the mystery of dark matter is solved.

The post Towards A New Understanding Of Dark Matter appeared first on Universe Today.
Posted by arclein at 12:00 AM